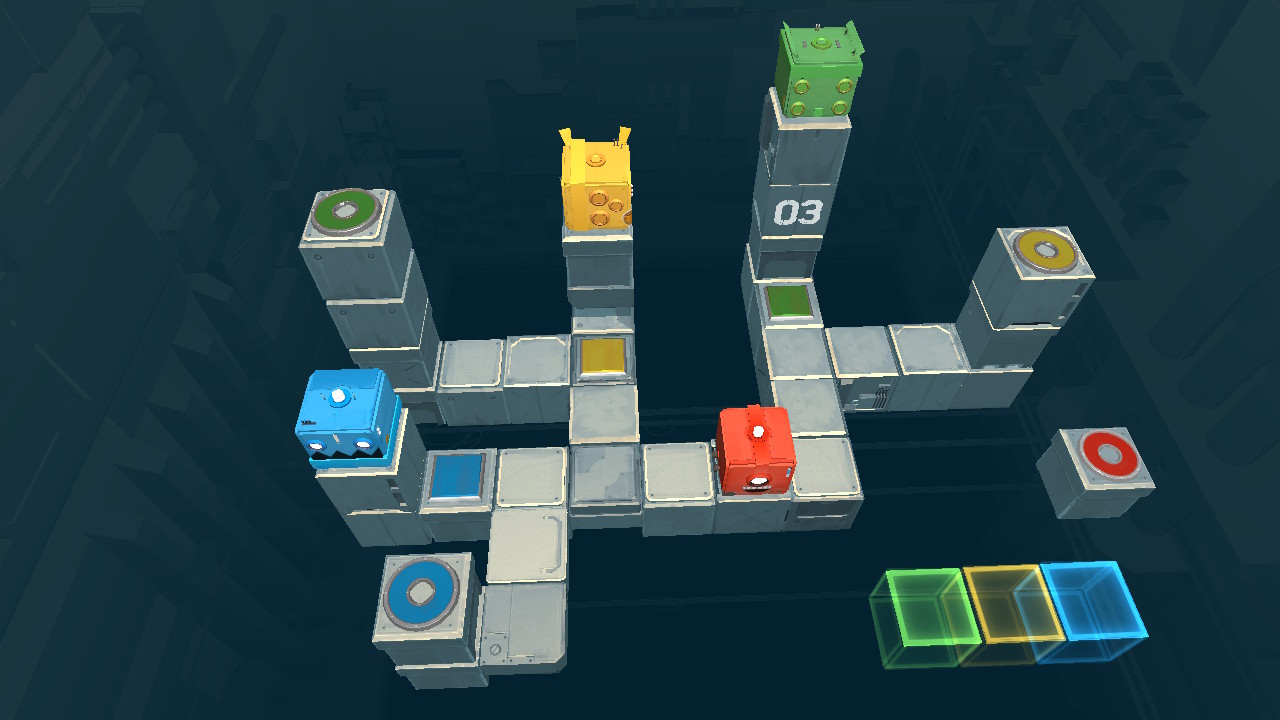 There’s a lot we can thank Valve for, apart from the annual Steam sale. Hiring the team behind Narbacular Drop and expanding those ideas into Portal kicked off an entire generation of clever, challenging action/puzzle games, many of them set in secretive government labs. Games that take an interesting mechanic and really drill down and explore all the possible applications and permutations of that mechanic are common now, but when done well, they can still be a lot of fun.

One of the Switch’s early success stories has been Snipperclips, a digital-only cooperative puzzle game that’s easy to share with friends thanks to the Switch’s modular controllers. Death Squared has similar accessible, share-it-with-your-friends gameplay, and it works for the same reason Snipperclips works. While Death Squared has been available for a few months on other platforms, the Switch’s unique form factor and portability give this version a bit of an edge. 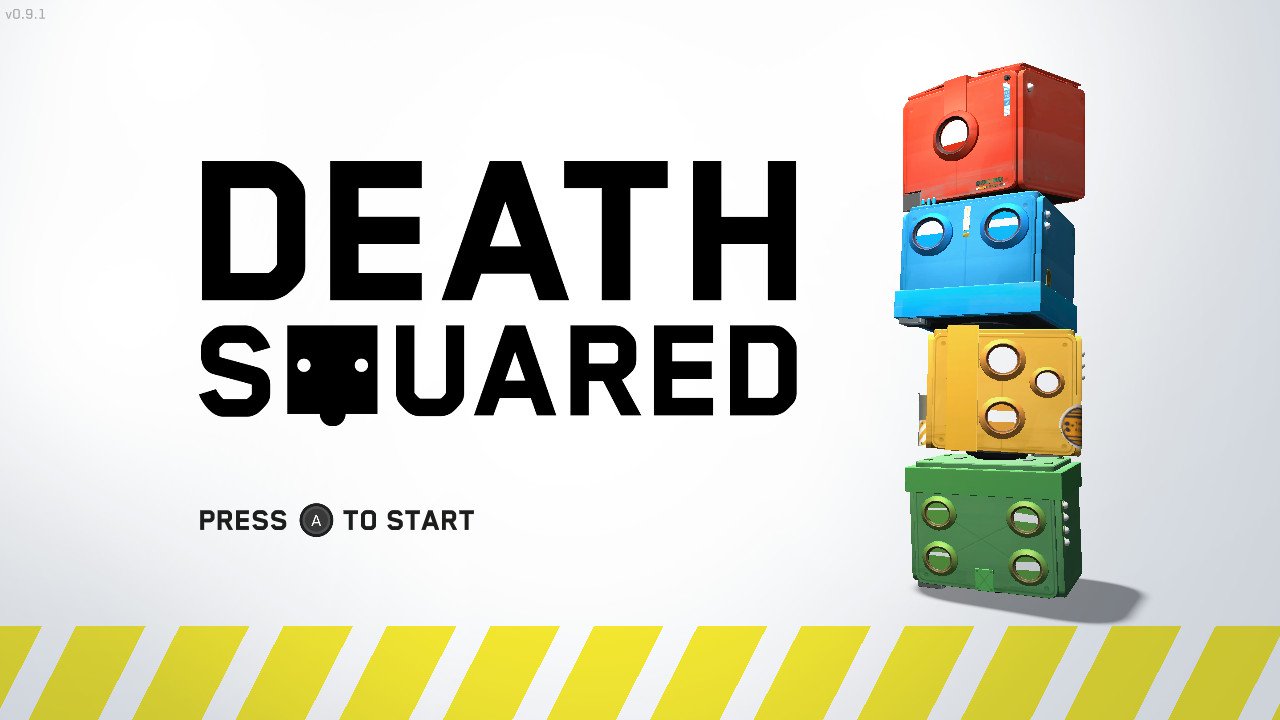 Death Squared has a pretty simple concept at its core. You control two to four colorful, cubical robots and have to get each of them to their goal marker without letting any of them die. Robots can trigger buttons matching their color, and these can open paths, alter the level layout, and/or trigger additional hazards that must be avoided on the way to the goal.

The story doesn’t really matter, but you can hear conversations between a facility AI and a lowly lab technician tasked with testing the small cube robots in between levels. Some of the later levels are downright sadistic, and the lab tech becomes progressively more disgusted with your robo-smarts the more frequently you die. Occasionally he’ll get bored and do something to amuse himself like reversing your controls or spawning dozens of copies just to keep you on your toes. The game also keeps a running tally of how many times you’ve failed, rubbing it in your face each time you fall off a level or are destroyed by one of the many traps. It’s fair to say you’ll probably end up swearing at least once.

Every hazard is color coded, and robots are immune to traps of their own color. A red robot can block a red laser for example, allowing a blue robot to pass by unharmed. Similarly, robots can’t pass through hardlight cubes of other colors, but will ignore cubes that match their color. Although the traps and hazards can be devious, this isn’t a game about twitch reflexes. You can move as slowly as you like to try and anticipate the hazards, and it’s a good strategy if you’re playing for as few deaths as possible. Every level can be analyzed and puzzled out eventually, and at that point it’s simply a matter of execution. If you’re working by yourself, that is.

You can play the game by yourself with each robot controlled by one analogue stick (and using the shoulder buttons to switch between ‘bots if you’re controlling more than two), but it’s much more fun to give the second controller to another player and shout advice at one another as you try to work your way through the maze. Playing successfully will require communication and patience, and my wife likened it to New Super Mario Bros. Wii‘s “divorce mode” where one player can screw things up for the other three without realizing what they’re doing. 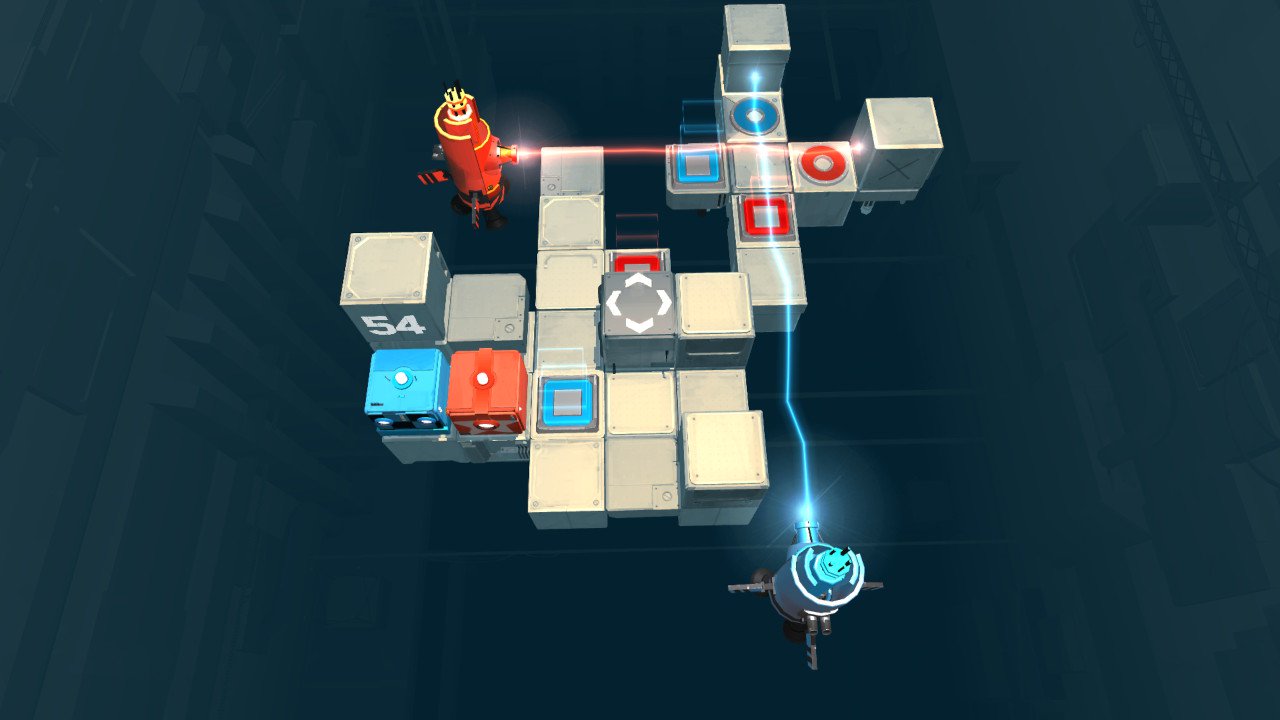 The design on display is well done, levels are clean and easy to read, and there’s no mistaking one robot for another. There are optional cosmetic decorations for every robot, and you can collect more patterns in the story mode if you manage to find the secret areas hiding them. I didn’t find the familiar design Darren wrote about, but I’m hopeful it’s in there somewhere.

I did notice occasional framerate dips in fullscreen mode which were annoying, even though they didn’t affect the gameplay. I never noticed this in handheld mode, so I’m guessing it’ll be addressed in a future update.

It’s also worth repeating, this game is difficult. There’s a good challenge curve, but it’s not long before the puzzles begin demanding flawless execution. If you have a low tolerance for trial and error or expect to clear levels on the first try, you’ll be frustrated before very long. 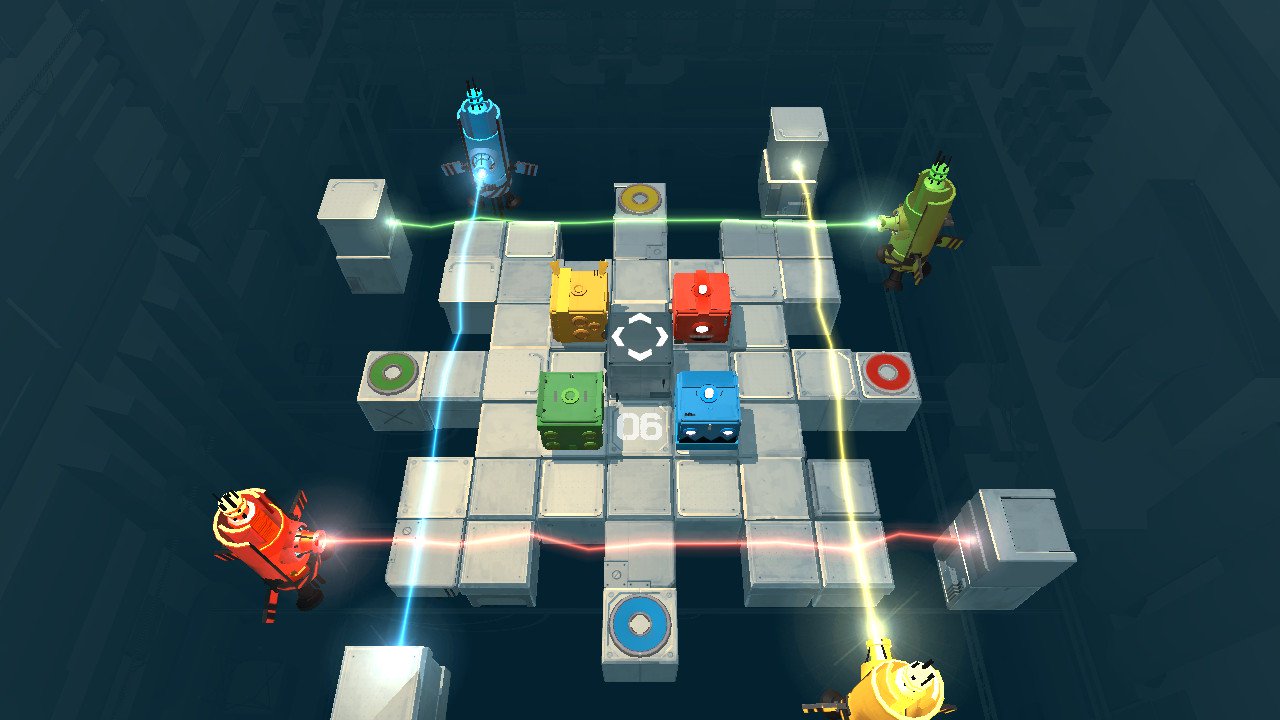 With 80 two-player levels and 40 four-player levels, there’s a lot of gameplay here even before you unlock the vault, a collection of super tough puzzles that show no mercy. Death Squared has been previewed extensively here at Destructoid, and CJ wrote that this is a great game to introduce to people who might not play games regularly. I agree wholeheartedly, and the Switch Joy-Cons’ relative accessibility lower the barrier to entry much further than handing someone a PS4 or Xbox One controller.

Death Squared is fun by yourself, but it really shines with some friends. There’s nothing really new here, but the ideas are well executed and it’s interesting to see how all the elements come together in each new deathtrap. It’s easy to recommend for people who enjoyed Snipperclips but are looking for something more challenging.

As much fun as it is to share with loved ones, Death Squared is considerably more difficult than Snipperclips, which didn’t even have a failure state. Even though it has a “party mode,” it’s not a game I’d advise pairing with alcohol, since fine motor control is one of the first things to go when you’re hammered. If you’re persistent and willing to work together though, Death Squared is a good time, and definitely worth picking up on the Switch.

[Disclosure: Zack Furniss and Kyle MacGregor, who represent Death Squared for Stride PR, were previously employed at Destructoid. Additionally, SMG Studio put a Destructoid-inspired cosmetic customization in the game. This unscored review is based on a retail build provided by the publisher. As always, no relationships, personal or professional, were factored into the assessment.]