Right off the bat, I’m just going to say it: Chime is an utterly compelling, aesthetically minimalistic puzzle game that rides the cusp of being entirely fantastic, faltering only at its lack of options. When it comes to presentation and polish, Chime is lovely. It’s quiet and subdued throughout its menus, and there is an uplifting feel to the game.

It’s funny, because I would swear this is a PSN title. There seems to be a split between PSN and XBLA titles. Microsoft gets exclusives on all sorts of fantastic downloadable game titles that, well, lack in polish but rock in gameplay. Sony, on the other hand, reigns in visually pleasing, maybe less game-like videogames that are more about the raw experience than anything else.

That’s why I would say Chime is a PSN game in disguise, for even though it is a puzzle game, it’s not just the game element that makes it successful — it’s everything else combined that makes it work. Read my review to understand.

Much of the success of Chime is courtesy of the music. Chime is a perfectly appropriate title for the game, as that sort of mellow, relaxing tune runs throughout the game and is evocative of the music that is represented. The five songs are fantastic: the earthy and plinky “Brazil” by Philip Glass, the ghostly “Play for the Science” from Paul Hartnoll, the trippy “Ooh Yeah” by Moby, the slightly aggressive “Spilled Cranberries” by  Markus Schulz and Fred Deakin’s funky “Disco Ghosts.” 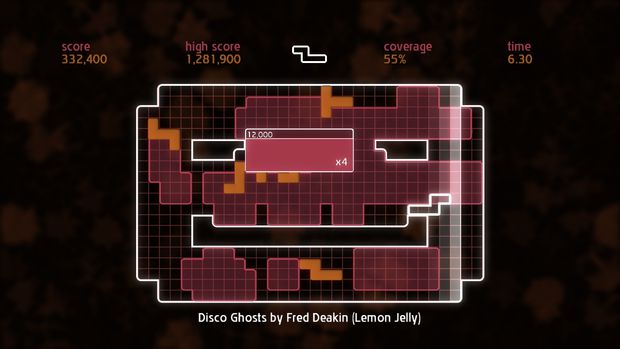 I cannot compliment Zoë Mode enough on these tracks. They fit the feel of Chime perfectly, and my only problem is that five songs (and thus, five levels) feels like only a tease. I know that the game is only $5, and let’s be real, a puzzle game doesn’t need to rely on music to be a good game. It’s just that while the five songs are perfect, thus I want to experience more. And since those five songs determine the playing field (which vary from plain to a smiley face), as well as a variation of the shape types, you will see and do everything very quickly.

Therein lies the big problem with Chime. While it is a charming and effervescent game, there is so little content here it feels like I’m only getting a partial experience. I’m left with two modes (a time mode, and a free play mode), no multiplayer, and, uh, leaderboards. I see no reason why there could not be a co-op mode, a challenge mode, or a versus mode like in Lumines. It’s weird how bare Chime is.

Thankfully, Zoë Mode is very close to getting away with this problem. First, the game is cheap at only 400 Microsoft Points. Chime is actually a charitable game, and sixty percent of the purchase price — 240 Points — is going to be sent out (as real money, of course) to children’s organizations around the world. There’s even an odd gift of 50 Achievement points that you receive just for buying the game and being charitable. This should make Chime a must-buy for Achievement whores. 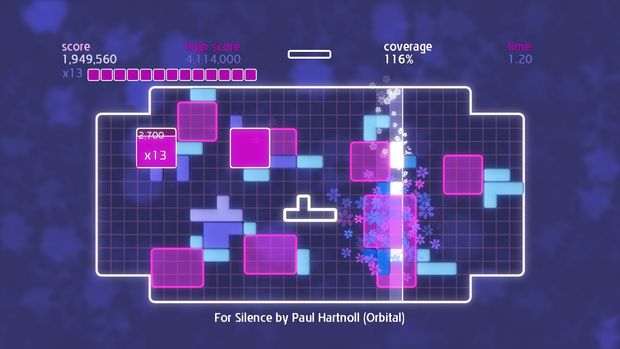 The second reason Zoë Mode can get away with the sparse nature of the game is that the gameplay itself is very, very solid. Notice I didn’t mention how the actual game plays until now. I did that because unlike many other games, what you actually do in Chime takes a back seat to the whole experience. Sure, scores are compiled for the time mode, but it’s not anything you’ll really care about. Chime is the least aggressive puzzle game I have ever played.

In each level, you’re given a series of shapes that are placed out on the playing field. The task is to combine these blocks to create at least 3×3 Quads for the passing beatline to take away. Throwing a wrench into everything is how each of those Quads have their own personal timers. You must drop more shapes to keep the Quad going before its personal timer expires and the beatline takes it away.

Taken away, it opens up more of the playing field, as well as “stamps” the grid with color. You’ll get bonuses for filling up the playing field with these stamps, and the song will get more dynamic. Combos come from connected Quads, and everything can be broken by an errant block that will erase all other errant blocks if the beatline goes past too it many times. 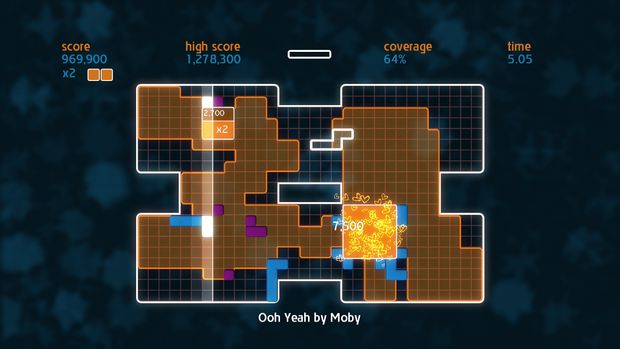 If it sounds complicated, it’s really not; Chime is very laid-back. I don’t think it’s possible to lose a level, and the only punishment you’ll receive in the game is a loss of a combo (which is beneficial for opening up the level some more). Hell, even the beatline feels more like a way of playing neat samples from blocks still on the field, even the ones that will ruin your score. It practically rewards you for having a messy field.

I’m actually a bit torn on this lackadaisical style of play. While it’s refreshing to see a puzzle game that goes with a “yay-let’s-have-fun-and-make-music” approach, I wish there was more of a challenge, or at least a goal. Other than high scores, there’s nothing else. Once again, the spartan nature of Chime is a hindrance.

In the end, though, I am still drawn to the game. I’ve been playing it all week, and will keep playing it for a long time. Maybe it is its gutsy approach to being a puzzle game that works with the player instead of against them. Maybe it just the music, which I and every fan of mellow house music will dig. Or maybe it is just the promise. Chime could be so much more. There could be loads more music, or loads more levels, or modes, or anything. Yet it’s not, and I don’t know if this is due to planned DLC or what, but it’s a crying shame.

I really hope this is not the last we see of Chime. When a game comes along that is this visually, audibly, and mentally pleasing, it’s not something to ignore. I recommend checking Chime out. For five bucks, it’s really not bad, you’re supporting a good cause, and maybe we can get the sequel that would really make Chime ring.