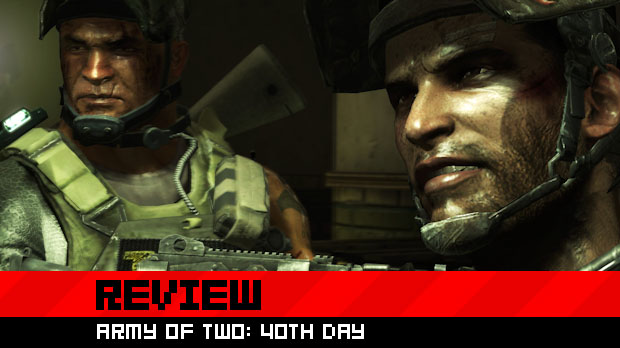 Army of Two didn’t exactly set the gaming world aflame when it released back in 2008. In fact, the only remarkable thing about EA Montreal’s co-op shooter was its sheer tastelessness, as daring duo Salem and Rios fist-bumped and cracked wise over the corpses of Middle Eastern terrorists.

Despite the first game’s critical reception, EA Montreal clearly did well enough to deserve another crack of the whip, and thus has returned with Army of Two: The 40th Day. Toning down the inappropriate behavior and ramping up the graphics, Army of Two’s latest installment could be considered quite the improvement. However, that might not be saying much.

So, just how much of an improvement is 40th Day? Have Salem and Rios finally been given something that deserves a fist-bump, or are these two mercenaries doomed to mediocrity forever? Read on as we review Army of Two: The 40th Day. 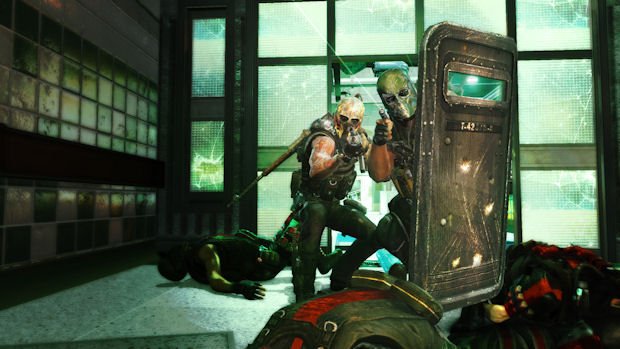 Here is this game’s story: There are bad guys. That is literally the plot to The 40th Day. First, there were not some bad guys, and then there were some bad guys. Salem and Rios have been hanging out in Shanghai, doing their mercenary thing, when all of a sudden, planes start crashing and buildings start falling over. Then those damn bad guys appear and shooting happens at them until the game ends. High brow stuff, for sure.

Of course, Army of Two isn’t about the plot, it’s about the sexually ambiguous co-op shooting, and Army of Two is pretty decent at it. Not spectacular, but not terrible either. The cover based shooting generally works well, with the same shooting mechanics we’ve seen in plenty of other games. It’s all been done before so often that it’s hard to do wrong anymore, and 40th Day makes sure to keep its third-person shooting strictly by the book. The game plays it safe, never trying to switch up the gameplay. This can be quite repetitive, but at least it keeps the quality consistent.

EA Montreal tries to keep things fresh by throwing optional gimmicks at you. The big thing this time around is the “Morality” system, and it’s about as dreary as it sounds. Every now and then, Salem and Rios will come across civilians that are being abused by bad guys. The duo can choose to ignore the plight of the innocents, or rescue them for a Morality boost and a reward. While these segments are pretty neat the first few times, they soon break the gameplay flow and grow irritating.

At various points in the game, the mercenaries will encounter a more pressing moral dilemma. Between them, players will have to decide which course of action to take, although they are usually very clearly “good” or “bad” decisions. Morality in gaming often feels forced, by 40th Day takes the overbearing and strained nature of this gimmick to new heights, as it desperately struggles to make you care about characters and situations in a game where characters and situations mean absolutely nothing. After each decision, you’re treated to a small comic book style cutscene showing the consequences, but you’ll be hard pressed to care. 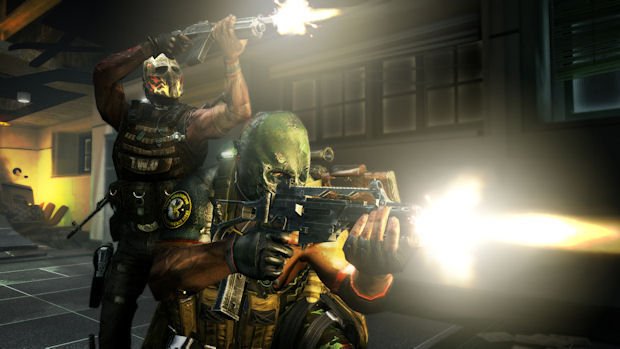 The more promising gimmickry comes in the form of the various tactical options open to Salem & Rios before and during combat. This can range from sneaking up behind an enemy and taking them hostage, or pretending to surrender so that you can quickly whip out a gun to blast an unsuspecting foe. Players can pretend to have died, or spot and tag various enemies for easier pickings. While none of these options are essential, they are sometimes fun to screw around with at least once, before the novelty wears off.

The “Aggro” system returns from the first game, and it works out pretty well, allowing the tactical nature of the gameplay to shine. Using one player to draw fire so the other can sneak around and pick off priority targets works surprisingly well and expands the potential for tactical gameplay. Again, it’s never really required for anything, especially as the game is pretty damn easy, but it’s nice to play around with for a while.

As always, there is also plenty of cash to be earned from callously gunning down enemies, most of which are white this time. There is a wealth of customization options, and the ability to wield diamond encrusted grenades and paint your guns in gaudy bright gold remains Army of Two‘s biggest draw. It’s just charming to have an AK-47 painted with flowers.

The single player campaign is short and unremarkable, and the lack of a drop-in/drop-out system for online co-op is a real hindrance, since you’ll need to set up a game and stick with it. If you’d rather just go it solo, the allied AI is surprisingly good, able to hold his own in a firefight and obey commands given with the D-Pad. He will occasionally screw up, and has a tendency towards dragging you out from cover if you need healing, but he’ll generally do a good job.

As well as the main campaign, there is a survival based “Extraction” mode and a full online Versus mode. As with the single-player mode, there is nothing really remarkable about any of it. There are better games out there that provide better online modes. What is in 40th Day is pretty solid and somewhat enjoyable, but there’s just very little reason to play any of it, since it’s not only been done before, it’s been done far, far better. 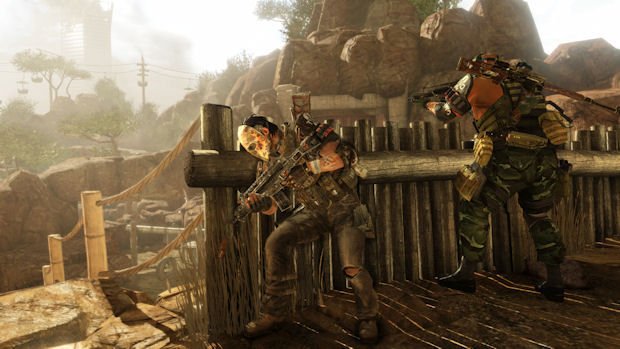 That’s the problem with Army of Two: The 40th Day. It’s really not bad at all. In fact, it’s pretty good at what it does. It’s just outshined and outclassed by so many other games. There are titles out there with tighter combat, more enthralling co-op play, better online, and more interesting gimmicks. 40th Day brings nothing essential to the table, making it feel rather humdrum in comparison to the competition. Also, it’s not even very funny anymore. Aside from one brilliant bit of dialog in which Rios talks about the time he raped a panda (and that’s what he did, Rios actually sexually assaulted a panda), the lack of humor in the game is quite apparent, when a dose of inappropriate comedy could have helped set it apart.

Army of Two: The 40th Day is a good, but entirely forgettable experience. It’s worth a quick play if you’ve got nothing else to do, and a weekend rental would serve you very well. However, it’s definitely not something you’ll want to keep on your gaming shelf for very long.