Cats are a mascot’s best friend

A Hat in Time is doing its thing. It’s hard to believe that it was announced on Kickstarter in 2013 with a 2014 estimated delivery date, but here we are six years later and hot damn is it one good platformer that can hang with some of the best classics.

The team managed to really hit that sweet spot between cloying mascot platformer and insanely weird without crossing either line: it’s fantastic. So here we are with the second big DLC pack, and this constantly evolving project is just as impressive as ever. 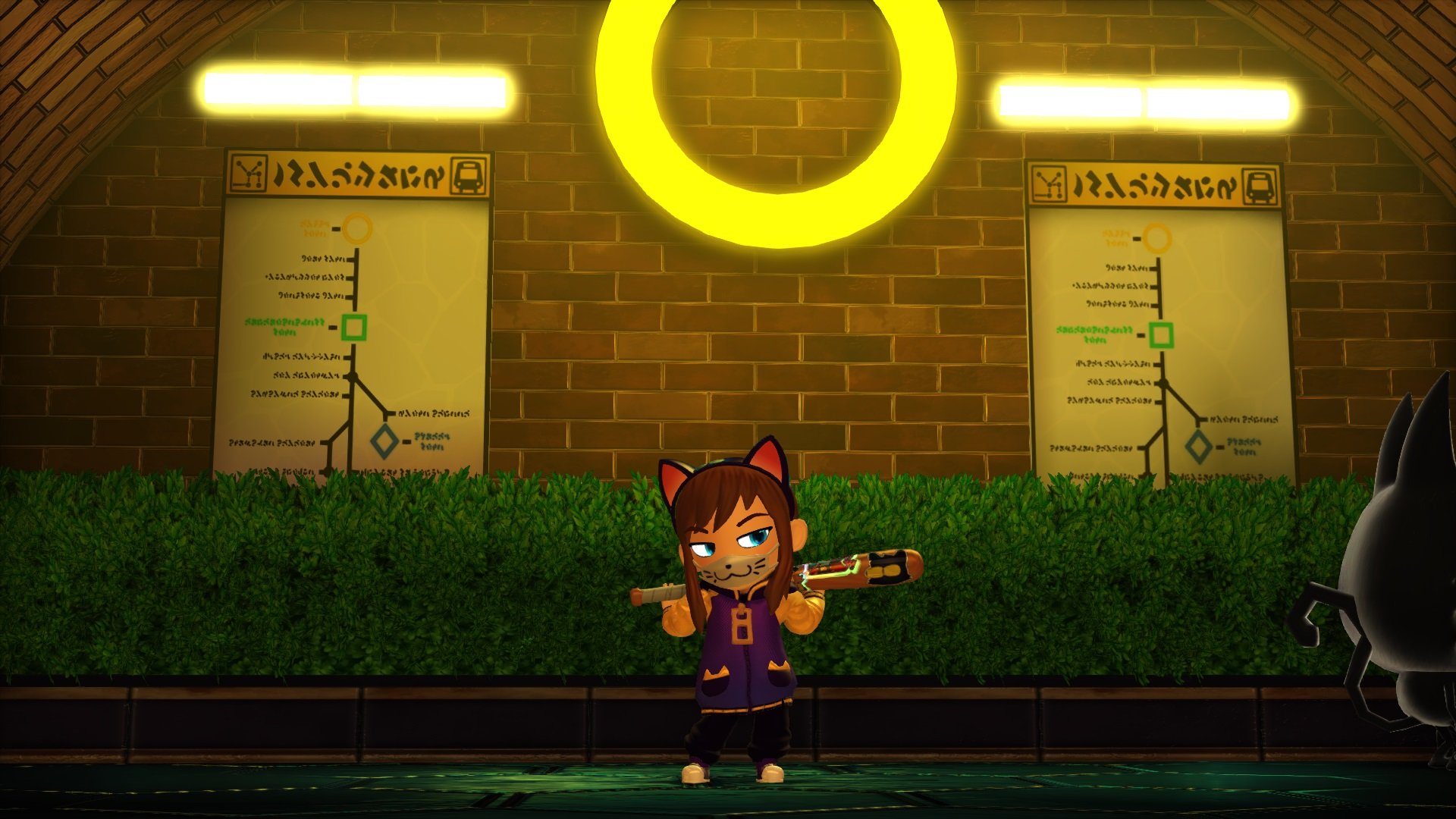 In Nyakuza Metro, Hat Kid is conscripted into what I can only describe as a cat thief clan. It’s such a wonderful setup for a neon-fueled romp through a fantasy version of Japan’s subway system.

Since Gears for Breakfast’s DLC presentation is a little esoteric, let’s break down what you’re getting before we dive in: 10 Time Pieces (Mario Stars), a new set of levels in the aforementioned environment, a graffiti-like sticker system, more outfits, two retro filter badges (Game Boy and Virtual Boy), and the fairly big new concept of online party (50-player support). It’s a lot! Oh, and all you need to do is collect 20 Time Pieces and you’re in: simple enough (and much more welcoming than the first DLC’s original requirement of 35).

Pretttttty much everything in Nyakuza Metro is cat-themed and it kicks ass. Just as I was getting into it as my cat heard the cries of the game and jumped into my lap, Hat Kid got into it too, freaking out at all the feline paraphernalia. This is one of the most wholesome IPs in the last decade, I swear. The whimsical music, the Frogger-like platforming between subway trains, it’s all a blast. If you’re like me and play nearly 100% of the time with the sprint hat active, it’s even better.

That’s partly because this new free roam hub is one of the most complex yet. The only real gates are literal (color-coded subway checkpoints), as you progress through the central metro area in a Metroid fashion, exploring new zones and picking up card keys along the way. There’s even an “assist mode” that you can turn on at a kiosk to sort of breadcrumb you to new missions, or you can play with it off and just get lost like you’re playing Persona 5 for the first time. Try Nyakuza without it first, then use it if you need it.

This DLC is like night and day compared to the last one, as heightened accessibility and freedom come hand in hand. I don’t want to give away too much, but Nyakuza Metro has a bunch of surprises in store like creating your own food combos (and reading cat Yelp reviews) as well as the chance to eavesdrop on cat conversations. I particularly adore those Jet Set Radio camera transitions after missions, which vaguely tease secrets you haven’t found yet or hard-to-find nooks (in fact I think the folks at Smilebit would be proud of the aesthetics here).

I wasn’t able to fully test out the optional online party system, but I think people with circles of friends who all like Hat in Time will dig it. You can get into mischief with random people (which is fairly aimless with everyone doing their own thing), or directly with friends while shooting the breeze over Discord. The latter is the way to do it as you can make your own fun, setting up your own objectives like deathmatches, or races.

Despite clocking in at just a few hours long, A Hat in Time: Nyakuza Metro is an instant recommendation. It’s pretty much everything I want out of a Hat DLC, and the exact formula I’d want Gears for Breakfast to keep replicating if said DLC never stopped coming. I hope it never stops.