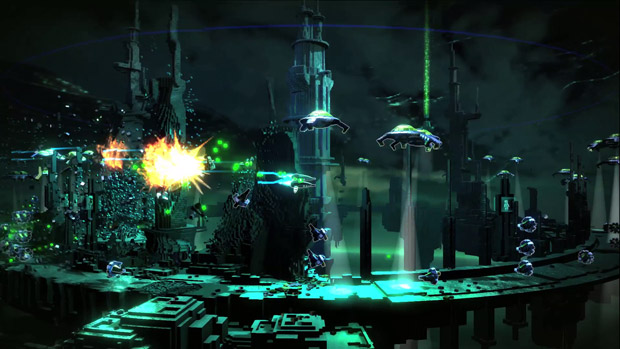 Shoot all the things in the spiritual succesor to Super Stardust

Housemarque made a name for itself with the addictive, colorful Super Stardust HD, one of the PS3’s early downloadable and indie exclusives. Housemarque followed with neat games like Dead Nation and the excellent Outland, but it’s now going back to its shmup roots with Resogun.

The “arcade action shooter” Resogun was announced today at gamescom exclusiveely for PlayStation 4. It eschews Stardust‘s spherical system for a left and right moving circular one.  Accordingly, it’s no longer a twin stick shooter, but a horizontal one.

You rescue things, get power-ups, and drop bombs, of course. Cool, screen clearing blue energy bombs.So satisfying.. According to the PlayStation Blog, “[t]here will also be a bunch of different ships, co-op multiplayer, plus a ton of things that we can’t really talk about just yet.”