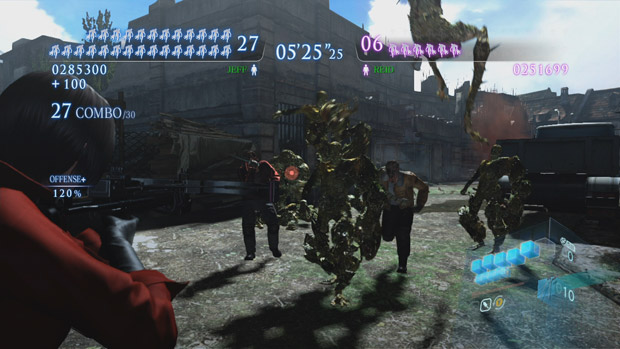 On December 18, the Xbox 360 version of Resident Evil 6 will receive three additional multiplayer modes, available for 320 Microsoft Points each or bundled together for 720 MS Points. The first mode, Predator (2-6 players), has one person as the B.O.W. Ustanak who must take down humans while they try to fight back or at least survive long enough to see the round’s end.

Next is Onslaught (2 players), a head-to-head mode where waves of enemies come after each player; by keeping combos going, more foes will be sent over to the competition. Lastly, Survivors (2-6 players) builds on the game’s solo- and team-based versus — when slain, players respawn as an enemy character and a successful kill will result in them resurrecting in human form.

The free title update for Resident Evil 6 we mentioned earlier is dropping on December 17, adding the “No Hope” difficulty, an adjustable in-game camera, and the option to use subtitles with English-language audio. Additionally, Ada Wong’s campaign will be unlocked and given an optional player-controlled cooperative partner.

The prospect of paid multiplayer modes worries me when perfectly fine multiplayer in all-around great games has barren lobbies. Granted, Resident Evil is a big enough franchise that there’s leeway, but I’d be cautious about the longevity of such offerings. For what it’s worth, the modes themselves — particularly Onslaught — sound worthwhile. See them in action on Capcom-Unity.