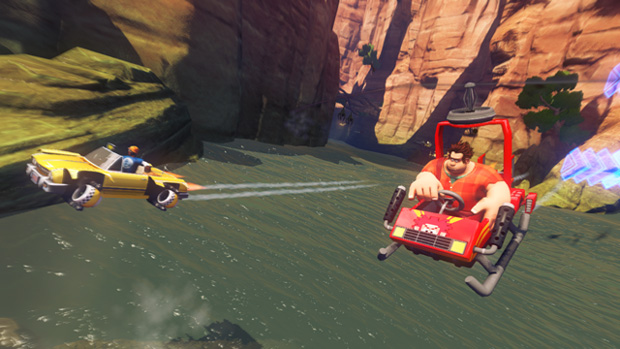 [Update: Sega now says that the PC and Wii U versions don’t actually have a release date yet. I think the company’s just trying to cover its ass, but whatevs.]

Sonic & All-Stars Racing Transformed is already looking pretty pimp, so all that’s left for Sega to do is to remind everyone of the title’s slew of incredible cameos. The latest character to join the fray is Wreck-It Ralph from the Disney’s film of the same name. If John C. Reilly is providing soundbites for the game as well, that would be just icing on the cake.

At first, you wouldn’t think that a Disney character from a yet-to-be-released movie would make sense in a crossover racer featuring decades’ worth of Sega stars. But then you realize that the plot of Wreck-It Ralph follows Ralph as he jumps into various videogames, trying to find a place where he can finally become the hero he believes he can be. Racing Transformed could be considered just another stop in his universe-hopping trek; when you look at it that way, Ralph’s cameo is actually quite genius. At the very least, he makes more sense than Danica Patrick.

Sonic & All-Stars Racing Transformed will be arriving on basically every platform under the sun — PS3, Xbox 360, 3DS, PS Vita, PC, and Wii U — come November 20. Logically, this means that Wii U will have to be released on or before that date. Surprise.