Better at one than the other…

Sega is showing off its new puzzle game Puyopuyo Tetris here at their already super busy TGS 2013 booth. As a fan of both games, I gave this cross-up a spin on the 3DS. Puyopuyo Tetris is also coming to the Vita and PS3 as well as the Wii U, with a motion control scheme set for the latter.

After choosing a character, the game asks which of the famed puzzlers you’d like to play. I’m much better at Puyo than Tetris, so I went in confident. In a classic competitive match, the other game you did not choose ends up being your opponent’s game. This had me setting up combos and matching colors to send obstacle lines (complete with cute/angry little Puyo faces) to the computer opponent’s Tetris board. And in turn, his line clears sent random blocks to mess up my beautifully laid chain stacks. 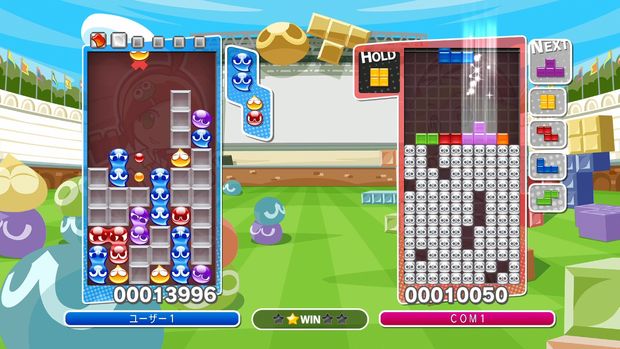 As any Tetris player would know, those lines I sent my opponent were also a bit of an opportunity for her. Multi-line clears had too many random blocks in my way to set up chains, so I had to rely on my reflexes to send as much trash back. I won and then jumped back in to try it in reverse, with my Tetris skills up against the computer’s Puyo.

Aside from this cross-up versus mode, there’s also a Swap mode that has games changing for each player in a given time. And while it wasn’t available on the show floor, a four-player mode was being demoed via video. Of course, you’re free to play Tetris vs Tetris, or Puyopuyo vs Puyopuyo if you’d like.

Puyopuyo Tetris comes to several platforms in 2014. Let’s hope Sega brings this mashup to the west.