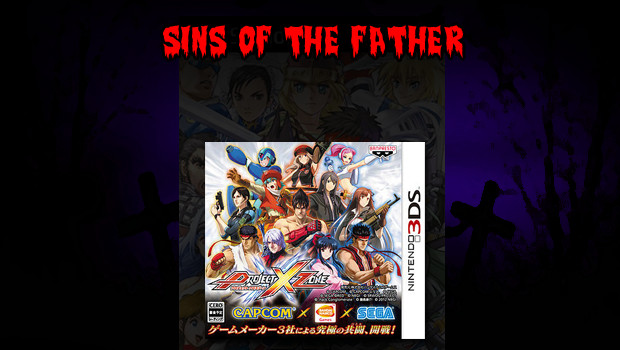 …and how perverted devs got it right

[Dtoid community blogger Cutie Honey shares his concerns about the upcoming game from Monolith Soft, Project X Zone. For an opposing viewpoint, see our own Dale North’s thoughts on the game. (Let it never be said that Dtoid isn’t Fair and Balanced!) Want to see your own words appear on the front page? Go write something! –Mr Andy Dixon]

So on my site, I’ve been doing reoccurring coverage of Project X Zone, an upcoming game by Monolift Soft and Banpresto. The title is a tactical RPG with fighting game elements and a large number of established characters from different Namco Bandai, SEGA, and Capcom franchises. It’s been picking up some steam for the crossover choices and the cool looking 2D sprites. But something has been troubling my thoughts whenever this game is mentioned, and that is a number of memories from its precursor… memories of a dreadful and repetitive nature.

That offending title is Namco x Capcom, a 2005 PS2 tactical RPG with fighting game elements and a large number of established characters from titular Namco and Capcom franchises. Sound familiar? Well much of the same staff crosses over themselves between these titles, including director of both games, Souichiro Morizumi. So if one were to compare the style and gameplay mechanics, one could see the “family resemblance”. (He also directed a RPG spinoff called Super Robot Taisen: Endless Frontier with a similar battle system gimmick and some reoccurring characters, but that’s another story that could fill up a entire blog.)

Before I go much further, let me establish that I wish nothing but the best for the game, which hits Japanese stores tomorrow. I hope it sells well and I hope people find fun in it. I enjoy crossover games just to see the humorous character dynamics and relationships being formed, as well as the licensed soundtrack which ends up being a crockpot of delicious synth covers. I just feel it’s my responsibility to inform people who really want this game localized, that it may not turn out to be the bee’s knees in glorious 3Ds.

To simplistically describe the gameplay system in NXC, the game functions like a normal isometric tactical RPG on the surface. Players choose a number of their available two person teams and deploy them to the battle. Each unit moves across the field to deal with enemies that often have poor stats, but overwhelm in numbers. After defeating all the enemies or completing stage objectives, stronger boss units and reinforcements appear and players expend many of their stored resources to bring down each stage’s villain. Rinse and repeat all of this for 50 more stages and you got a meaty (and predictable) game that easily excels 60 hours to completion.

The unique feature of these games occurs once characters enter battle. When your pair of heroes gets to attack, they have a number of attacks available to them based on when you press the designated attack button, which direction you hold down, and which of your two characters is in front. You have a limited amount of attacks you can perform per battle encounter, but by juggling a foe and attacking with certain combinations in order, you can gain energy, increased damage, and even extra time to attack. This adds a fighting game dynamic to the game where your reaction time determines how much damage you can do each turn. When your character is defending, they have to press buttons in time with the enemy attacks in order to reduce damage and gain bonus energy, similar to Street Fighter III’s parry system, albeit you don’t have to be as good as Daigo to utilize it. You can also forgo the entire defense sequence at the expensive of some SP.

Both fighting and strategy elements, longevity, AND shameless fan pandering!? Sounds like a solid concept for a fun game, but after 10 hours with it, the only word I could use to describe the game is:

But what would trigger that response? After all, I like tactical RPGs, I like fighting games, and I love KOS-MOS. Well, that’s when the idiom “Too much of a good thing” can come into play:

In NXC, you have to do the battle minigame during every, single, little encounter. Every turn takes about 40 seconds (at the very quickest) per character, and With 10+ of your own units per stage, and 20+ of the enemy breathing down on you, an entire battle can last hours. And while it may be fun to see how you can juggle with a newly acquired unit, the novelty starts to wear thin after so many encounters, because you’re seeing the same thing again and again. Entering the combos became almost job-like in execution and monotony. Defending became something I dreaded seeing, but like a Gangnam Style related post on Facebook, it unfortunately happens once a minute, and skipping those sequences costs you (a small amount of) resources and gives you no bonuses, so you’re guilted into doing them most of the time.

Imagine if you had to sit through every attack animation during Fire Emblem or Advance Wars and play a QTE, otherwise your turn is wasted. Franchises like Super Robot Wars used to be in this boat until they quickly realized people don’t need to see a “Knights of the Round” like cinematic every 30 seconds. To meet my quota for namedropping other games to sound smart, the pace ofNXC made Final Fantasy Tactics and Civilization look like Quake III in terms of speed.

What also doesn’t help is that the game wasn’t terribly difficult, just tedious. Tedious to the point where I was falling asleep in the middle of a battle, and in a game that features the likes of Megaman (Legends), Captain Commando, AND Mitsurugi (Soul Calibur), that shouldn’t be occurring.

So my problem lies with a battle system, that while cool at first, get boring after a while. “Well sir…” a well-spoken individual may ask, “Are there any TBS games with action elements that you think do that right?”

Let’s bring in one example of another crossover game, also which is also developed by Banpresto. And the subject matter might surprise you. That title is Queen’s Gate: Spiral Chaos.

According to this picture, she has lost most of her upper armor, she has very low HP in general, and you’re gonna get in trouble at work or school if you were looking at this image.

In Queen’s Gate: Spiral Chaos for the PSP, you control a squad of (almost) all female warriors who are battling to become the supreme ruler of the land. Each female hero and enemy has five additional health bars for different armor on their body: (Head/Breasts/Torso/Arms/Legs). And each attack in the game targets different armor parts as well as the enemy’s HP. If you destroy an armor part, they receive a stat reduction. If all their armor is destroyed, they get embarrassed and retreat. (Hear me out.)

The lone male character you receive in the game can even recruit monster girls by being a pacifist and knocking off all their clothes, rather than knocking them out period. Knocking off all of their clothing also rewards bonus experience and items. It’s like Pokemon for Perverts… Oh wait, that’s called Deviantart and Furaffinity. Zing!

This is the safest screengrab I could do, literally.

So like NXC or Banpresto’s mainstay, Super Robot Wars, you have these battle animations that play out as you attack and if you knock off an armor part mid-animation, you can start stacking additional attacks by knocking off all their clothes in succession. (Please continue to hear me out.) The one thing that makes it different (and better) than NXC though is that you can choose to SKIP the animations and just deal a base amount of damage like any traditional tactical RPG. This increases the pace of battles several times over, and is great for plowing through male enemies (Who don’t count for wearing clothes, because videogames).

Despite the gender offensiveness of the game as a whole, the simple act of being able to skip the juggling minigame is a solid gameplay decision. Witnessing Mai Shiranui’s massive mounds move around may be titillating to a teenager for a while, but like everything else in life (especially murder), it gets boring fast. Especially when you have to kill dozens of grunt units with the same attacks over and over. But for the moments where it’s opportune to capture a flower girl by deflowering her, you at least have the choice of engaging in the extra work.

THAT is what I fear Project X Zone really needs. The battle mechanic may fully interest some gamers, but for everyone else, it should have been an optional feature that rewards you with more damage for using it (if you FEEL like using it). And if you do skip the animations, just compensate the player by doing a set amount of damage. It seems like a waste that this game borrows so much from NXC and not enough from a game that’s the epitome of sexism. I’ll admit I just wanted to sound like scum by typing out that last sentence.

So what I’m essentially surmising is: A game for perverts may end up being better, in terms of enjoyment, than one of the biggest mashups of the year. Just based on how boring a somewhat related 2005 game was? At least in my books, that prediction may ring true.

Already at the end of the article and this is the first image swatch I use from actual Project X Zone gameplay.

But maybe I’m wrong, in fact, I hope I’m wrong. Maybe the game will universally be hailed as the greatest thing Japan has brought the World since Wilt Chamberlain. I’ve see efforts to improve upon the system in trailers and coverage. They’ve added a button to skip the lengthy rotoscoped ‘cut-ins’ that characters perform, the pacing seems better, and maps seem less cluttered at the moment. If it got localized, I’ll probably pick it up right away anyway. Hell, I’ll put down the 40 bucks for a preorder right now. But imagine being 60 hours into the game, and you’ve listened to the same Ulala attack clips for the tenth time in one battle alone. That my friends, is Chu suffering. That kind of tedium just makes me wish I was playing something better.

Something tells me they won’t spend resources to make Rule 63 sprites of all the enemies getting Midnight Blissed by Demetri.

I’m neither blindly optimistic nor bitterly negative towards this game, just concerned. One could call me lazy for not getting into the flow of NXC’s battle system, a hypocrite for disliking the mash-up of game genres, or too impatient to get into the flow of the game… And I wouldn’t entirely disagree. I’m sure the battle system just isn’t my “thing”. But if Project X Zone repeats the same bad habits, then I’m sadly not boarding this hype train.

At least the soundtrack will be fun.