The rumors are true! Sega’s Shinobi franchise is making its return this fall with the cleverly titled Shinobi 3DS. Not a port or a remake, the title is being built from the ground up for the Nintendo 3DS with developer Griptonite Games at the helm.

I recently jumped, slashed, and ninja magic-ed my way through the game’s first stage, giving me an early peek at what’s in store for our brave, portable shinobi. It apparently involves an enormous robot shark, at some point. Have I got your attention yet? 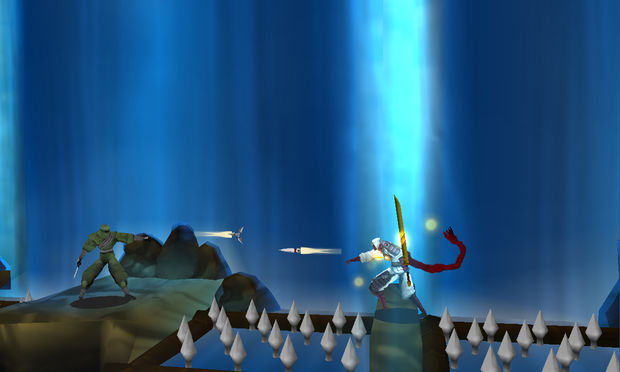 It’s been awhile since we’ve seen a Shinobi game, and rather than try to reinvent the classic, Sega’s aiming more at a modernization of some core concepts. The idea is to keep the classic Shinobi feel and gameplay — the side-scrolling action combat and platforming — with a host of gameplay twists and features for a new generation.

What this means is that it plays as you’d expect, with a heavy emphasis on the use of throwing knives (which seem to be in unlimited supply) and close-combat with a katana. The action is swift, with repeated presses of the A button resulting in a combination of slashing strikes. The brisk, nimble ninja can also slide, coming up and out of the maneuver with an upward slice of his blade to eviscerate enemies.

A full range of ninja magic will be making its return, as well. Using it is as simple as tapping the L button, unlike some other handheld ninja titles that had you tracing Kanji characters on the touch screen. (I’m looking at you Ninja Gaiden:Dragon Sword; I want to burn up some baddies with ninja fire, not write a letter.) The touch screen did come into play for switching between the magics, which in this early demo consisted of the basic fire, lightning, and wind. 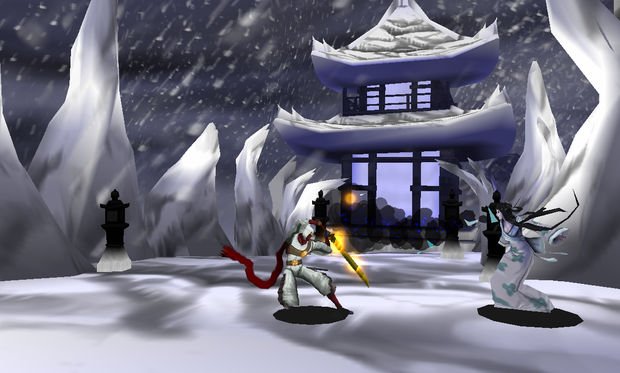 While quick to go on the offensive, ninjas do just as well playing it safe on defense. Unfortunately, our shinobi can’t directly block attacks, but has been given a parry which I found to be largely useful in most situations. By tapping the R button at the correct time, I was able to effortlessly deflect incoming strikes, leaving enemies open for brutalizing with my ninja steel.

Platforming will also play a pretty big role in Shinobi 3DS, if my short demo is any indication. I ran into a number of tricky spots that required well-timed wall jumps to evade spikes traps, and moved from ground to rooftops with a grappling hook.

I was only able to see part of the game’s first level, which was a village being engulfed in flames as enemy ninja and samurai attacked. Visually, Shinobi 3DS is shaping up pretty well, with a decent range of color and visual effects that bring the 2.5D action to life. 3D effects on or off, it didn’t make all that much of a different for these side-scrolling bits. Sega did reveal that over-the-should third-person action sections where you’re “moving into the screen” would make it into the mix, which should lend itself well to the 3D effect. 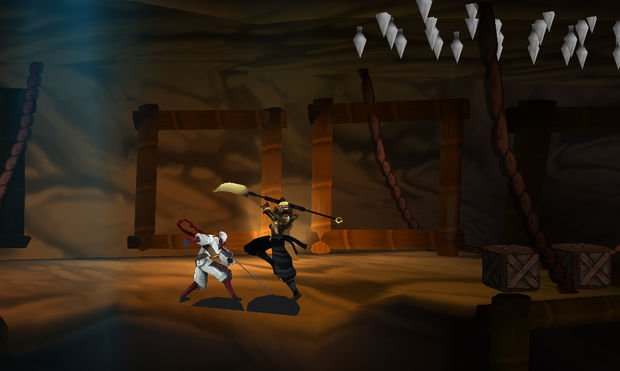 From the sound of things, Griptonite is hoping to pack Shinobi 3DS with a ton of content. It’s promising over 60 in-game achievements, each of which will unlock something that players can use, view or wear. The classic ninja star throwing mini-game will also be making a return… in mind-blowing 3D! I was also promised an After Burner-inspired jet ride, and at least one massive, wet-dream-inspiring battle against a cyborg shark.

At this early stage, Shinobi 3DS seems like a fair mixture of old-school with enough fresh ideas to keep things compelling. I did find the controls to feel a bit on the lose side, at least compared to the tight action of the sprite-based Shinobi games of old. A lot of that may have to do with the fact that we were only able to use the circle pad to control the ninja (which, by the way, Sega did confirm is the father of Joe Musashi form the original Shinobi titles). This will change, with the option to also use the d-pad making the final cut, something I suspect will change how I feel about the game’s controls.

Shinobi 3DS is out this fall, and I’m hoping Sega brings that cyborg shark to E3.