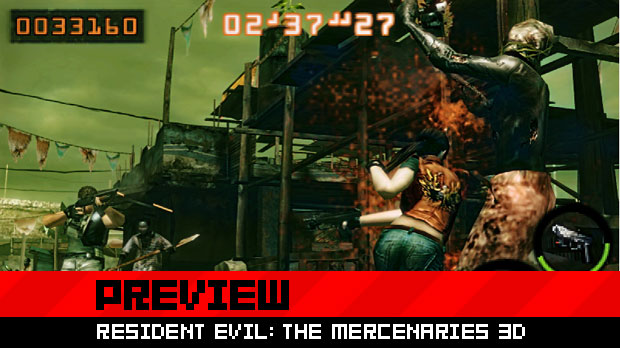 How do you follow up Super Street Fighter IV: 3D Edition, the game many critics (including myself) called the best of the Nintendo 3DS? By releasing the next big game hardcore 3DS players have their eyes on, Resident Evil: The Mercenaries 3D.

Sure, it’s not the story-driven, wholly original game that Resident Evil fans might be clamoring for; that’ll have to wait until 2012, when Resident Evil: Revelations is released for the 3DS. But in the meantime, The Mercenaries 3D looks like it’ll scratch itchy trigger fingers of folks looking for a bit of extra action on the side. 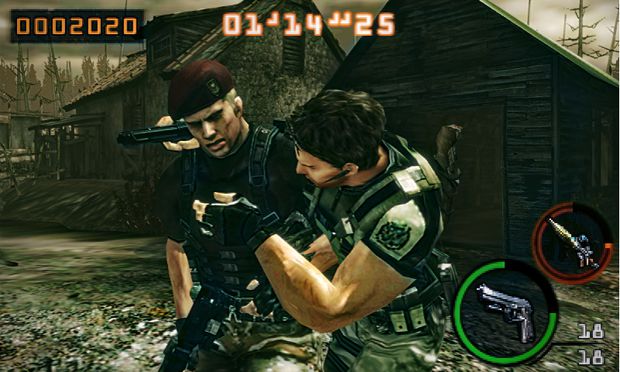 Familiar with the “Mercenaries” bonus modes from Resident Evil 4 and Resident Evil 5? Then you already have a good idea of what to expect the The Mercenaries 3D, which uses the popular extra as its basis, and then sprinkles in added goodies to flesh out the experience.

The premise is simple, with The Mercenaries tasking players with defeating as many baddies as possible within a set time limit. Unlike traditional Resident Evil games, the goal is to score as many points as you can within a time limit. Gameplay takes place across a series of one-off maps, with environments that will be familiar to players who braved Resident Evil 4 and Resident Evil 5.

Capcom brought a four stage demo to its Captivate event in Miami, which proved that the “Mercenaries” experience has been successfully translated to Nintendo’s handheld. Six playable characters made the cut for the demo — Albert Wesker, Jill Valentine, Jack Krauser, Hunk, and the sibling team of Chris and Claire Redfield — and each had their own predetermined weapons loadout.

Give thanks to the heavens for the Nintendo 3DS circle pad, because it goes a long way to making The Mercenaries experience a pleasant one on the controls front. Moving around in 3DS space is a snap, with the rest of the controls basically exactly where you’d expect them: you aim with the right trigger, and fire with the “Y” button. The “Y” button, incidentally, is also your catch all “action” go-to: you’ll use it to pick up items, to open doors, and even to frequently deliver melee strikes. 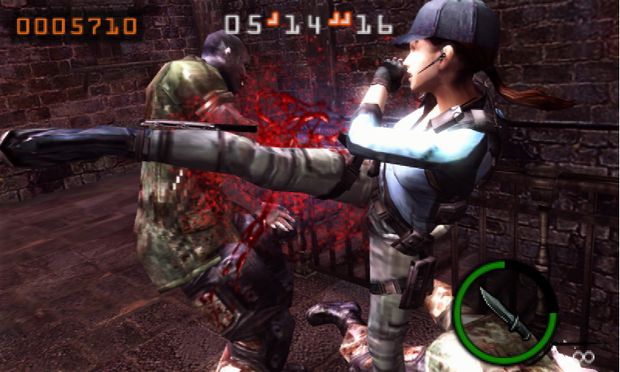 Bonus: you can walk and shoot at the same time. I know, this is crazy talk for a Resident Evil game, but here we are. In reality, it’s more of a “strafe and shoot” that can be performed by holding the “L” button while aiming. Once locked in, you can move forwards, backwards, left, and right; you can’t however, turn around, first-person shooter style. While this control method seems like it would give you more freedom in play, I have to be honest: I didn’t rely on it and rarely used it. It’s a nice option, and maybe I’m just used to playing Resident Evil without, but I almost never used it in action.

Another first for the series: first-person shooting mode. While we didn’t see it in action, we’re told players will have the option to have the game go completely first-person for shooting. This is something that players can apparently set in the game preferences, and is not an on-the-fly control option; if you don’t want to use it, you won’t have to.

As for the “change of heart” and putting more action-oriented controls into the game, director Kazuhisa Inoue says it wasn’t necessarily from any demand that players might have imposed over the years. Instead, it’s simply a matter of them being right for the project.

“For this specific game the goal was a more fast-paced, action-oriented experience,” Inoue tells me. “It was a natural decision. If a player can move while they’re shooting, we’re going to be able to achieve [that experience] more effectively. For Mercenaries, it just made a lot of sense.” 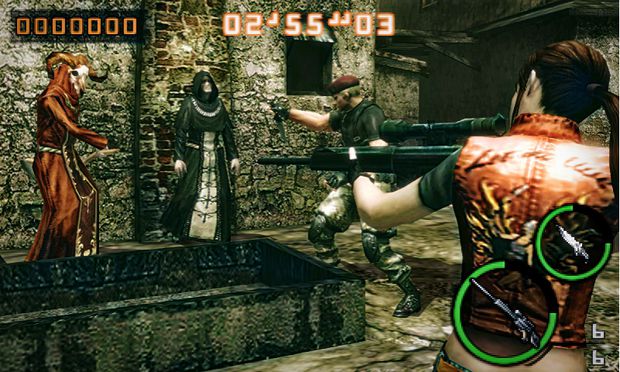 While the game largely uses assets and gameplay ideas from The Mercenaries sub-games found on the consoles, the updated controls aren’t the only fresh feature. Capcom is also including a “skill system,” which is analogous to Call of Duty‘s perks mechanic. Up to three skills — from a pool of 30, unlocked as you play — can be applied.

Some examples I saw included the “Smart Reload,” which nearly double reload speeds; a “Thunderbolt” melee attack that sent electrified enemies flying; and one called “Reversal” that powers up melee attacks when health is low.  By mixing and matching skills, each player can customize their play experience. Find the skills you like the most and stick with them — using them often will allow you to increase their potency upwards of three levels.

Cooperative gameplay for two players, either locally or via Wi-Fi, is also supported. While most stages can be cleared alone by skilled players, getting the highest scores may require a equally-skilled partner. With two folks in on the action, combo attacks can be performed. These unique melee attacks and animations can only be done with another partner, and are more powerful that traditional blows. For example, I saw Krauser reach in and slash an opponent, and his partner Hunk entering the fray quickly with a leaping jump kick animation. For tougher foes, a three-combo attack may be necessary: Krauser starts with a boot, and ends his animation with a dropkick, but not before Hunk dashes in with the swipe of his knife. 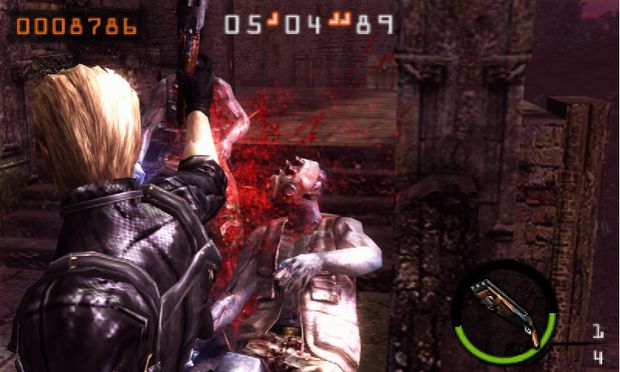 The Mercenaries also marks the return of Capcom’s impressive MT Framework engine on the 3DS. Like Super Street Fighter IV: 3D Edition, this game is easily one of the best looking titles on the handheld. Its 3D stands up surprisingly well, even with the slider on “full blast”; I never had any issue with blurry images or ghosting when I played.

But like I noted with many 3DS games in my review of the hardware, the 3D effects are secondary to the action — they didn’t seen necessary to the gameplay. Director Inoue agrees with me that it’s not required for a good experience, but also notes that he personally plays with the effect turned on.

“It’s not an essential part of the experience, but neither is, say, the background music,” he explains, while telling me he appreciates being able to give players the option.

Capcom will only commit to a “summer” release for Resident Evil: The Mercenaries, although retailers like GameStop give a more specific “July” timeframe. Whatever the case, it looks like it’s the game that may end the 3DS “launch” software drought, and certainly seems like it’ll be worth the wait.