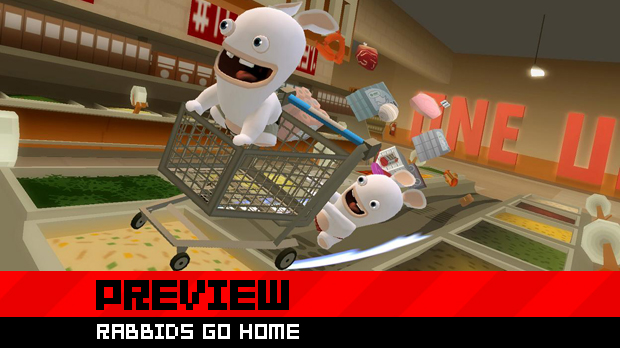 The Rabbids are done with Earth. They want to go back home to the Moon and they’re going to do it the only way they know how to: like a bunch of morons.

The Rabbids are running around the planet and collecting all sorts of crap in order to create a giant pile that will reach the Moon. It’s up to you to help the Rabbids collect stuff such as cloths, dogs, chairs and even a cow!

Hit the break to find out how Rabbids Go Home will leave a smile on your face the entire time you play the game. 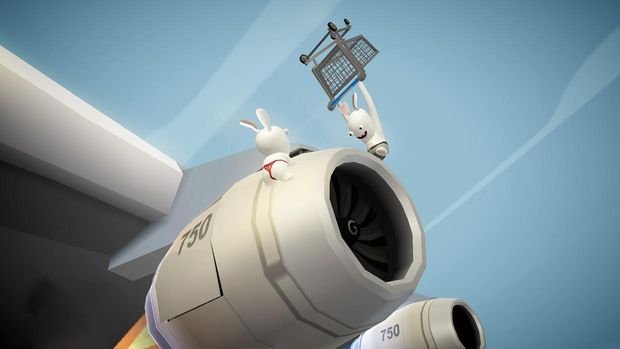 You’ll be playing as two rabbids, either by yourself or with a local co-op buddy. One steers a shopping cart and the other collects crap to put into the cart. Controls are very simple — you can run, attack by charging into things with the shopping cart, and that’s it. You’ll gain other abilities that are unique to each level, too, such as the ability to fly.

Your goal is to go into every level and collect everything you can stuff into the cart. Think Katamari Damacy, but your cart doesn’t increase in size. All of the items are magically squeezed into the cart until it’s time to dump everything out at the end of the level. You have three health bars, and if you lose them all, you’ll die and lose everything you’ve collected.

There’s going to be over 60 missions with around 20 hours of gameplay when Rabbids Go Home is released, and I got to try out three of the levels while at Ubisoft.

One level saw me going through a grocery store, one saw me go to a hospital, and one saw me go after a cow. Each level will have tons of items that you need to collect, and there will always be one primary item that you need to pick up. In the hospital level, the Rabbids had to take a guy enclosed within a bubble bed. You then had to escape via the roof and jump from building to building using the bubble bed to glide to other buildings safely. In the cow level, the Rabbids had to chase after a truck with a cow in it. Once the Rabbids nab the cow, they’ll have a couple of minutes to get to the end before the cow explodes.

At the end of the level, players will dump the contents of their cart into a toilet. Yes, a toilet. There’s even a Rabbid band playing musical instruments around the toilet in celebration of you taking a huge dump. Yes. Really. Have you ever seen a cow get flushed down a toilet? Hilarious! 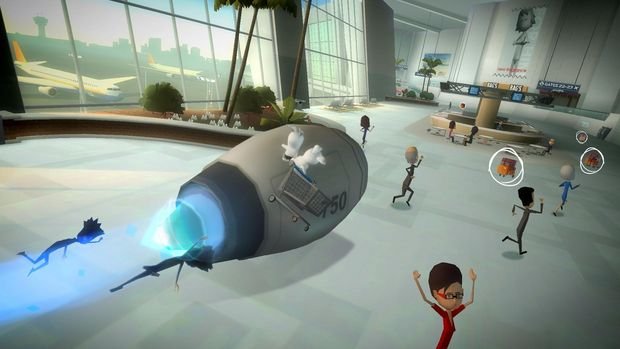 The toilets you dump your crap into all go to the location of the giant pile of crap the Rabbids are using to build their way to the Moon. You’ll see the mountain increase in size during the course of the game but we weren’t told if the Rabbids will actually make it to the Moon.

Anyway, the game is very easy. You collect stuff and try to get to the end without losing your stuff. You’ll run into dogs and humans trying to stop you, but they’re usually pretty easy to take out. Just tackle them a few times and the dogs will end up in your carts and the humans will lose their clothes (which you can collect, too).

Or you could abuse the fuck out of the Rabbid while inside the Wiimote. You can shake your Wiimote like crazy and the Rabbid will bounce all over the place. And the Rabbid loves it. He’ll always stand back up and have a giant smile on his face.

And you know, I had a giant smile on my face the entire time I played Rabbids Go Home. It’s such a silly and simply game and it was a ton of fun. The game is cute, the Rabbids are adorable, and the premise is absolutely insane.