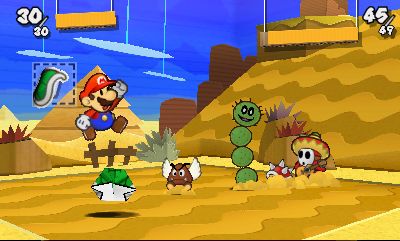 Growing up I could just never get into role-playing games at all. I enjoy them now, but for the longest time I would steer clear of the genre, with the one exception being any of the Mario related RPGs. I still consider Super Mario RPG: Legend of the Seven Stars my all time favorite game, and I, of course, adore the Paper Mario and Mario & Luigi series as well.

The latest Paper Mario for the 3DS is a sharp departure from the past games, as Sticker Star dramatically shakes up the formula. There are no partner characters, you don’t earn experience points, and navigating the new land via an overworld map are some of the major changes.

But you know what? Change is good, especially in this case. What I got to check out of Sticker Star still felt like a solid role-playing game that pulls off the Mario RPG charm.

The story sees The Mushroom Kingdom holding the annual Sticker Fest to celebrate the arrival of the Sticker Comet. The Comet lands in the town, and — oh no! — it’s Bowser who’s comes to drive the plot forward by somehow shattering the Comet into multiple pieces. Bowser gets powered-up by the effects of the Comet in the chaos, levels the town, and kidnaps Prince Peach.

Mario is among the crowd during the chaos, and the powered-up Bowser easily knocks the hero out cold. Once he’s regained consciousness, Mario meets Kersti, a flying sentient crown that is the caretaker of the Royal Stickers, the source of the magic behind the Sticker Comet. Kersti acts as your guide and helps you out with useful info whenever you need it with the press of a button.

Everything in the world has this arts and crafts feel to it, from the sticker element to the background looking like cardboard cutouts. Remember how I said Bowser leveled the town? Well I meant that quite literally. The entire town got rolled up into a giant tube, and Mario has to find and recruit over a couple of dozen Toads to help unravel the city before he can press forward.

From here you’ll have access to Decalburg, one of the main hubs of Sticker Star. Here you can talk to towns folk, buy or sell items at the shops, and so forth. You’ll want to come back here often, as different things will open up to the player as you progress through the game.

And that’s one of the giant differences about the world in Sticker Star to past games. Whereas before the experience may have been somewhat more linear focused, you’ll actually be able to — and want to — revisit areas you’ve cleared via the overworld map that will remind you of any Mario game from the NES or SNES era. And while this map design offers a better experience for those on the go, the overall game will have a similar length to past Paper Mario games.

The main goal for each level is finding pieces of the destroyed Sticker Comet, and there’s a big emphasis on backtracking and exploration. As this is a handheld title, though, you won’t be stuck in a level thanks to the modular design. You may not be able to access one path right away until you find whatever you need in a later level, but there will be another path in the level that you can take to exit. Levels that haven’t been fully explored will be marked, and you can always revisit for that 100% completionist satisfaction.

Some levels you come across will feature pieces of the environment missing, such as a bridge. Once the the missing object has been found, you can come back to where it should be and enter a mode called Paperization with the Y button. From here, Mario will be floating above in the air with the missing piece, and has to set it back into its spot. An overall dumb mechanic, and the only major annoyance I came across in my playtime as I didn’t feel it added anything.

The biggest change is the exclusion of partner characters. In its place are stickers. Lots and lots of stickers. From the second you start Sticker Star, you’re going to come across dozens of stickers scattered all around the environment. You have to peel the stickers off the walls, and once you do you can drop them into your inventory. You can only hold two pages worth of stickers at first, but you get more album pages as you progress.

Stickers range from jump, hammer, Koopa shell, POW block, spiked defense helmet, fire flower, ice flower and more. That’s just the base version, as you can also find higher tier stickers as you go. So say the basic jump causes five damage, the next level jump will cause ten, the next level even more, and so on. You can keep a mix of different level stickers with you, too — it’s all up to you. And you can kind of see why there’s no need for partners now. For example, the Koopa shell sticker effectively does what Kooper from Paper Mario would have done. The only thing lost is the partner banter, if anything.

The different level of stickers will also change how many timed hits you can perform, with the first level of a sticker allowing you to do only extra damage, and the higher tiers allowing you to do multiple strikes. There’s timed damage blocking as well, plus you can still attack an enemy with a jump or hammer strike in the normal world before entering the battle phase.

So what’s the point of fighting anyone if you don’t gain experience points? Well, aside from the possible dropped stickers, you get coins. You get coins for fighting, completing levels, finishing a match with one move for a perfect bonus, and you can find coins all in the world too. You will get a lot of coins, but you will spend the coins just as fast as you find them as they play a fundamental role in the battle system.

You get one sticker attack per turn, but you can change that with the Battle Spinner. It’s a match-three slot machine game that you can pull up after spending three coins. The purpose to the Battle Spinner is that it will grant you two or three attacks for one turn duration instead of the one, if you match each roller that is. You can bribe the machine with 15 coins to merge the first two rollers so that you get at least two attack slots automatically, and for another 30 coins you can make the slot machine slow down the spinning.

Fights later on, especially with bosses, will see you pumping coins into the machine. You can use the Battle Spinner with each turn, but the price goes up with each use in each specific battle. The second time you use it will cost you 30 coins to merge the first two rollers, and 50 coins to slow it down, for instance.

It was weird at first, but the further along I got in the game the more I liked the system. It opens up a ton of different strategy options, plus it makes every fight feel more exciting. By the time I got to the first boss I already had a dozen types of different stickers. And as far as increasing your hit points goes, you will gain HP by finding HP+ hearts in the world, or by helping Toads in need of assistance.

On top of the normal stickers are the Things. Things are non-papered real world items that you will find in the world like a giant oversized fan or a Japanese Lucky Cat figurine. These items can be used in the environment, but you can also convert them into stickers that provide you with a powerful attack. They’re so powerful that they end up taking up four slots on your album page, so they’re best used in boss fight type scenarios, especially as bosses will have weaknesses to a specific Thing. While Things are important, you can always just revisit a level and reacquire a Thing (and stickers) that are placed in the world. Or buy them at shops in towns, too, of course.

Overall, I like the new take on the Paper Mario series. I can see the new fighting system being more intense further into the game, and the aspect of collecting stickers, while cumbersome, appeases my need to collect every possible thing I can. Mario RPG fans may be wary with the changes, but as a long time fan myself I strongly suggest you give this one a chance.