I’m hiding in a bush. It’s a nice bush, all green and… bushy. I feel safe here. Unfortunately, I’m drawn out of my verdant sanctuary by the crackling of my radio, and then an authoritarian voice starts shouting at me. There are men, men with guns, and they are running down a hill, shooting at my bush. The bastards. Crawling out of the protective shell of leaves and twigs, I’m treated to a stunning vista. The fictional Greek island of Stratis, 20 square kilometers of valleys, forests, farms, towns, and picturesque coasts. There’s little time to soak all this in, however, as I’m still being shot at.

Tiny figures dance around in the distance, dodging and weaving, ducking and diving, but, most importantly, unleashing a barrage of bullets in my direction. The voice on the radio continues to shout at me. I need to shoot these men, because they are bad. I can tell that most of my bullets are missing their targets, mainly because of the dirt and dust exploding out of the ground around them. But enough fly true, and one man goes down forever, then another, and finally the third. I cheer. I’m a good soldier.

The voice on the radio is less impressed, unfortunately. And surveying my surroundings, I can understand why. My squad’s medic lies contorted next to a rock, and nearby are the rest of my team, all ex-soldiers, because they are dead. Arma 3 is serious business, and is almost certainly not about hiding in bushes, letting everyone else do the hard work.

Describing Arma 3 is an unusual task, because even in its alpha state, it is many different things to many different people. To some, it is a deep, complex military simulator, filled with jargon, detailed and realistic weaponry, and dry but intense missions. To others, it’s a vast multiplayer experience, pitting armies against each other, or small strike teams against AI opponents in co-op. It’s also a sandbox filled with possibilities, and a robust tool for crafting scenarios which can in turn be enjoyed by other players. It’s not so much a game as it is many games and a platform for creating more.

It’s easy to draw comparisons between Arma 3 and Minecraft, though I’m hesitant to do so for fear of being called lazy, as so many things get compared to Mojang’s toybox these days, whether it’s because of the way they are developed or because of the freedom contained therein. But there are many striking similarities, from the way the alpha gives players a vast array of tools and opportunities, to the way that it relies on players to make the game they want to play, rather than forcing a specific set of scenarios on them with an uncompromising direction. 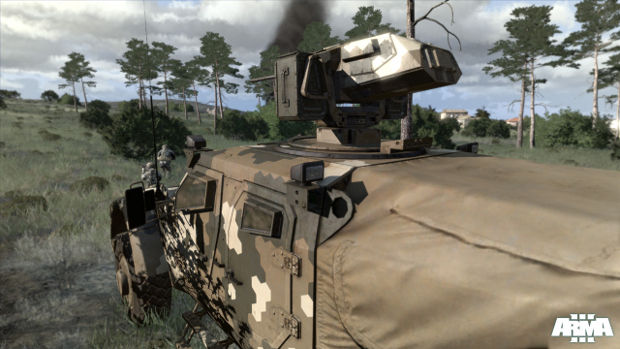 Upon jumping into the alpha for the first time, the most striking thing I noticed was the expansive and rather gorgeous world which Bohemia has crafted. Stratis is just one location, not the entirety of the game, but it’s absolutely huge. In its alpha state, Arma 3 is already optimized far more than Arma 2 is, even now, years after it launched. In fact, it’s likely to run smoother than its predecessor on the same PC.

Initially, it did require some minor tweaking, however. Allowing the game to detect the appropriate settings based on my rig gave me settings that were, although playable, not optimal. The framerate was something I would have been comfortable with on a console, but not on the PC I own but cannot really afford.

The main issue was view distance. Combat often takes place across great distances, and with than in mind, Arma 3 lets you see everything. Moving the slider down significantly increased performance a great deal, and while I sacrificed a bit of the detail, I was still able to see ridiculously far. 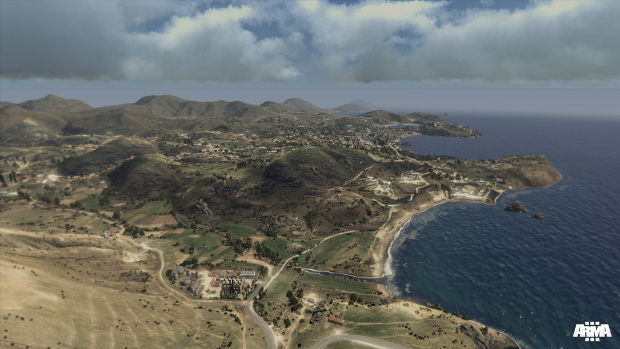 Being able to spot enemies from a great distance is one of the reasons why it’s often necessary to hide, perhaps behind a bush, but better yet, a big wall. An attack can come from anywhere. So it’s rather convenient that Arma 3 has made getting rid of that giant target on one’s back a tad easier.

Stances have been reworked so that they are now more fluid (both in terms of animation and the way you change stance), and give players greater control over minor changes in position. Different stances also offer different tactical options, but most importantly, for a coward like me, it makes hiding behind a wall, occasionally leaning out to spray some bullets, a much simpler affair.

The AI takes full advantage of this range of movement, but often it causes them to dance around and act erratically. In the midst of a firefight, I’ve seen them run out of cover, drop, move a bit, stand up, duck, change location, and then repeat, all in the space of a few seconds with no obvious purpose. It’s still an improvement on Arma 2‘s AI, and overall they do tend to act more aggressively and with greater cohesion. 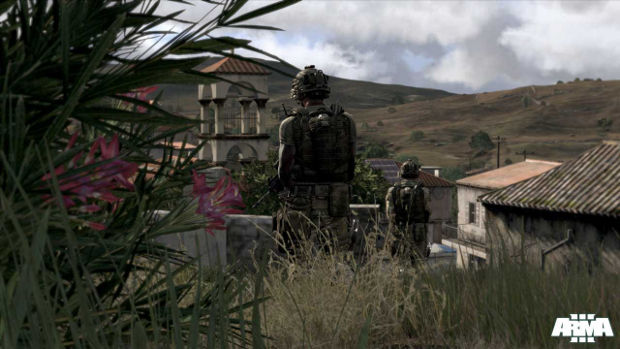 Adding to the immersion provided by having more control over movement, better AI, and a believable game-space are a slew of other improvements, building on the deep, but sometimes unstable, foundations of Arma 2. Audio is especially impressive, with firearms and explosions sounding eerily realistic, while there’s the constant radio chatter which comes across as less stilted and awkward than its predecessor’s.

Guns are not simply extensions of yourself that you point and shoot with. They are complicated pieces of machinary, often tricky to fire, frequently with punishing recoil. In more arcade-like, fast-paced shooters, the last thing you have to worry about is weapon weight, but in Arma, that’s a serious concern, on top of the weight of everything else you lug around with you. It has an impact on a soldier’s stamina, and in turn their ability to move with haste.

So, when looting the corpse of a fallen foe, something that — while still not all that intuitive — has improved a great deal in this iteration of the franchise, it’s not a simple matter of just grabbing everything that looks cool. One must take into account the effect the added items will have on their mobility. 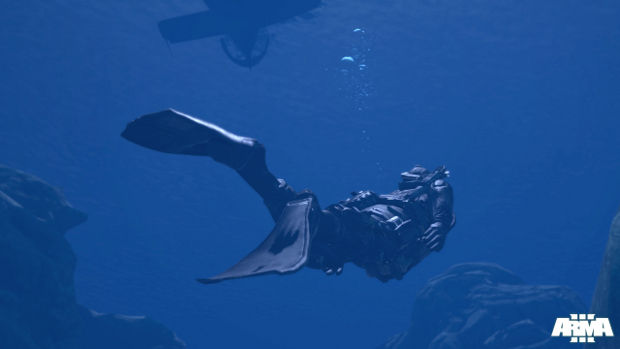 While the alpha comes with some showcase missions, showing off changes to infantry combat, air combat, ground vehicle combat, and all new underwater shenanigans, along with two cooperative missions for online games, you’ll probably stop caring about those quite quickly. It’s serendipitous, then, that the community has already put together countless missions using the intimidating map editor. I’ve only used the editor for benchmarking, setting up a variety of scenarios to test performance with, but others have gone all out to craft their own multiplayer party spaces.

Clicking on that inviting multiplayer button reveals a long list of matches ranging from those employing the twin co-op scenarios devised by Bohemia, to many more built by other players running the gamut from six-player matches, to giant 64-player wars. It’s likely that’s where I’ll be spending most of my time, since enjoying the creativity of other, more talented people while also having a wee blether with comrades as we hunker down to hide from a constant hail of bullets is something I’m rather fond of doing.

If you want to try out the game yourself, but don’t want to put money down on the alpha, then you could always befriend someone who has already taken the plunge, and get them to send you an alpha lite invite. This gives you the ability to check out the showcase missions and the editor, though it lacks all the multiplayer fun.