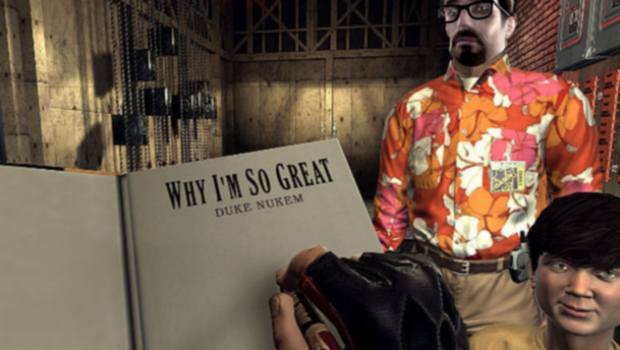 Most reasonable gamers would consider Duke Nukem Forever, on its own, is a big enough insult to the industry. Gearbox CEO Randy Pitchford, however, has decided to take the mockery further by comparing it to one of the most beloved games of all time. The fiend!

“I don’t know if you’ve played Duke Nukem Forever. It’s awesome,” gloated Pitchford to Eurogamer. “And it occurred to me, the pacing was exactly like Half-Life 2, where the game would get me in a puzzle space and I would be confined there until I worked out what the components of the puzzle space are. It’s basically a linear, narrative experience, but the puzzles are derived from the environment. It’s not just ‘shoot the guy’ … It’s almost identical, beat for beat in terms of its gameplay pacing, to Half-Life.”

The CEO still adamantly defends the critically panned game, and expressed his belief that critics who hated it just “really wish all video games be elevated into this really high art form” and were thusly upset by Forever‘s low-brow humor.

Either he’s trolling, or he’s mad (and I say this as a man who loves Randy). It wasn’t the fact that the humor was dumb so much as it was, at times, downright disturbing in a very unfunny way. Not only that, but the “jokes” (mostly regurgitated, context-less movie quotes) were just one ingredient in that festering fecal soup. It had a lot more going against it than desperate attempts at comedy.