I certainly don’t envy the folks at Bethesda Softworks. For sure, their award-winning RPG, Oblivion, is going to go down in history books as one of the first truly great titles of this high-definition generation; I wouldn’t mind having a stake in that. And yeah, everyone who works there drives cars that are not only way nicer than mine, but get far better gas mileage. But taking on the pressure of crafting a next-generation Fallout? My cardiologist has advised me to sit that one out.

For some, the pseudo-1950s, post-apocalyptic world of the Fallout series is sacred. Some ten years after the release of the original game, the bar Black Isle Studios set has yet to be truly hurdled. Fans of the series are smart and they’re rabid — subsequent titles using the Fallout license that were released when the original team split (Fallout Tactics and Fallout: Brotherhood of Steel) were torn to shreds. One thing has been made very clear — if you enjoy eating solid foods, do not f**k with the Fallout formula.

The good news? Bethesda Softworks knows this. There are some big shoes to fill, and they know that all eyes are on them. Any misstep will be become a feast for Fallout fans and Internet trolls, and for many people, conclusions have already been drawn. I had a chance to visit Bethesda’s Maryland studios to get a preview of the game, which is set to hit the PC, PlayStation 3, and Xbox 360 in 2008. Hit the jump for the infos. 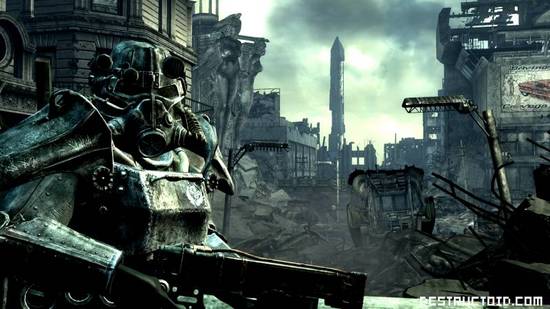 It should come as no surprise that the team at Bethesda are fans of the original series. Back in 1997, while working on their own RPG, Elder Scrolls II: Daggerfall, they fell in love with Fallout. The wide-open world, the tone, the characters, and the fact that a player’s actions really mattered all struck a chord with the Bethesda team. When the rights for the series were up in the air, the team joked internally that they should make Fallout 3. So it must have been freakin’ hilarious when Todd Howard, the game’s executive producer, found a post-it note on his desk in 2004 that simply read: “Fallout is yours.”

The demo we were shown of the game reveals a few things. For one, Bethesda are very dedicated to keeping the spirit and the tone of the original Fallout game alive. The “wackier” over-the-top experience of Fallout 2 has been put to the side in favor of the gritter, more realistic tone of the first game (rest easy — Brotherhood of Steel and Tactics have been ignored). It’s set in a post-war Washington, D.C., now known as the Capital Wasteland, complete with bombed-out national monuments. And secondly: to those who are worried about the game being “Oblivion with guns,” here’s the deal: not so much, actually … your Internet trolling license has been revoked. (Yes, there are a fair amount of guns in the game, including an awesome gun that can be used to suck up items in the environment and fire them at enemies.)

Sure, there’s plenty here that reeks of Oblivion. Parallels can be made in areas like how you interact with NPCs, or the physical character creation system, which is a modified version of what was used in Oblivion. You can play it from a first-person perspective, much like your traditional shooter. Or, like Oblivion, you can switch between first-person and third-person with the click of a button; only this time, the camera is mounted over your character’s shoulder, not unlike Resident Evil 4. 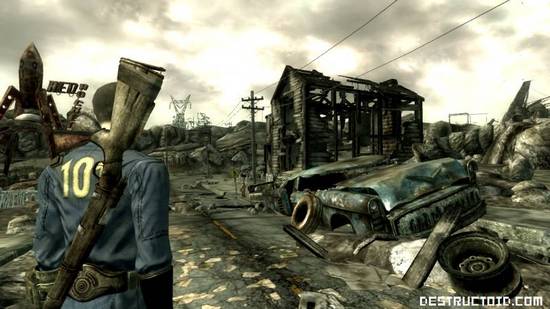 But unlike Oblivion’s combat system (which was entirely real-time, and involved a lot of button mashing) or your average FPS (kill everything that moves as quickly as possible, OMG!), Fallout 3 offers you choices. Want to run and gun your way through a room full of Super Mutants in first person? Go right ahead, but it’s certainly not encouraged. In fact, Bethesda has implemented an in-game turn-based mechanic known as V.A.T.S. — the Vault-Tec Assisted Targeting System.

This slower, more methodical approach to combat is actually encouraged in the world of Fallout 3, as it’s more accurate and certainly more rewarding for the player. When V.A.T.S. is utilized, time stops and a zoomed-in view of your enemy appears. Different areas are displayed — a head, individual legs, arms, a weapons, and more — and each are given its own health meter and a percentage which represents your chance to hit (which varies depending on your stats and weapon of choice). The action can be paused at any time — assuming you have enough in-game action points — and actions queued up, thus opening up a world of strategic-style gameplay.

In the demo shown, Todd Howard used V.A.T.S. to fire off a round at a Super Mutant, aiming right for the poor bastard’s soon-to-be-exploded noggin. As the bullet left the rifle, the camera zoomed in on the target and spun around to get the best view of the impending carnage. As the round meets its mark, the Super Mutants head erupts into what seems like hundreds of chunks, and Howard pointed out an individual eyeball that made its way out of the Mutant’s skull and into a pile of rubble. All of the death sequences in this game play out much like this, and will vary depending on the enemy, the part targeted, and the weapon. The easiest way to describe it, in Howard’s own words, would be “crash mode from Burnout … with body parts.” 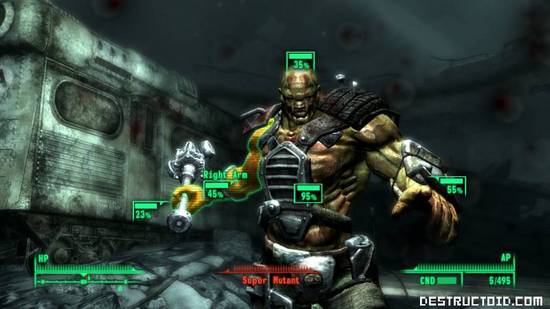 Gameplay aside, the violence is glorious, and very much in line with what the people expect from the Fallout series. “Violence is f**king funny,” Howard said more than once during the presentation, and it’s hard to really argue with that. When a theater full of videogame journalists bursts into uncontrollable laughter at the sight of an exploding leg, the point is well taken. It goes without saying: it’s time to put the kids to sleep — Fallout 3 is most definitely not for the childrens.

The depth of character customization found in the Fallout series is very much still in place. The game starts you in Vault 101, where you’re expected to live your entire life. The first hour of the game takes place entirely in Vault 101, where you’ll learn the ins and outs of what it’s like to be a vault dweller. In an extended and interactive character creation system and tutorial that spans from your birth to age 19, you’ll create your character (male or female); choose your beginning stats through S.P.E.C.I.A.L. (Strength, Perception, Endurance, Charisma, Intelligence, Agility and Luck.); pick your basic skills and traits by taking the G.O.A.T. (Generalized Occupational Aptitude Test); and more.

As expected, the highly involved skills, traits, and aptitudes customization of the Fallout series also remains. Of the 14 skills available, three can be chosen to grow at a faster rate than the others. At every even-numbered level, you can choose a perk: a special skill or talent that will give you a small advantage in certain situations. With all of this said, it’s not possible to create a maxed-out, monster of a character — you’re capped at level 20, so choose your perks and skills wisely. Speaking of which, now might be a good time to warn you — unlike the enemies in Oblivion, enemy encounters are not scaled to your current level. This means that mindlessly wandering forth into the world, while is entirely possible, is not necessarily the wisest of choices. 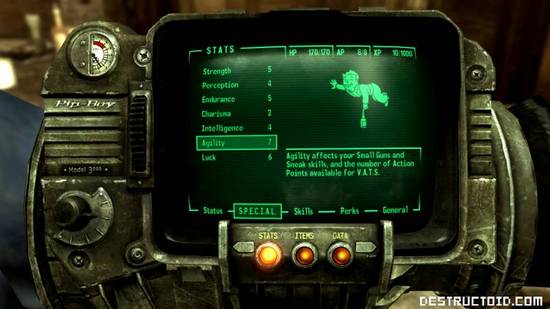 Bethesda is also heading into some unfamiliar territory with Fallout 3 — a finite narrative. Unlike their previous offerings, Fallout 3 has a definite ending after its 20-or-so hour main quest. When you complete the game’s main quest, finding your father and figuring out why he left Vault 101, the game ends. That’s it. That doesn’t mean there won’t be plenty to do and see across the Capital Wasteland. Bethesda promises a yet-to-be-determined number of endings for Fallout 3 (the number 12 was thrown around, but that’s still pending). Meeting NPCs and completing quests will alter how you play the game and what you’ll encounter along the way.

One such quest can be picked up in Megaton, a city built on a gigantic crater, its entrance crafted from the remains of a downed airliner. Compared to the vast wasteland you might be used to seeing in a world devastated by nuclear holocaust, Megaton is thriving. You enter a bar in search of clues that might help you find your father, and it’s bustling. A transistor radio is playing one of the game’s 20 licensed songs from the 1940s, “Happy Times,” by Bob Crosby, Bing’s younger, less successful brother. You spot a mysterious man in the corner, who later introduces himself as Mr. Burke, and he asks you to help him with a small, but important mission — help him wipe Megaton off of the map using a live warhead that sits in the center of the town.

Choices, sacrifice, and survival. These are key themes found throughout Fallout 3, and they can be seen in the story, in the quests you choose to undertake, and even in the core gameplay itself. Radiation, for instance, has seeped into every pore of the world. The game features a RAD meter which will measure how the radiation is affecting your character. Certain things, like water, are also contaminated with radiation. But water is also necessary for survival. Will you drink the water to raise your health at the cost of having the radiation seep into your blood?

As Howard played the demo, he decided to accept Mr. Burke’s request to nuke Megaton. After setting a fusion pulse charge on the bomb and getting a safe distance away (through the Washington D.C.’s Metro, one of the game’s “dungeon types”), he simply pressed a button at the request of the mysterious Burke. Off in the distance, you see Megaton being wiped off of the map, a mushroom cloud exploding from the ground in an awesome display of fireworks and smoke. The demo fades to black and we’re reminded by Ron Perlman: “War. War never changes.” 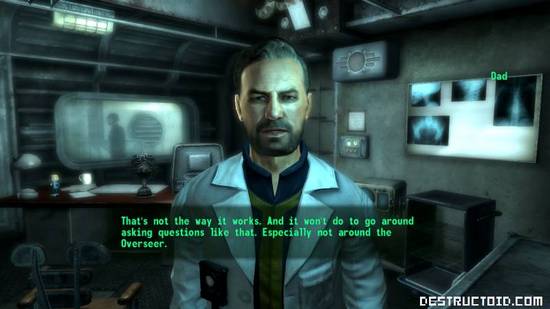 The game is on track for a Fall 2008 release, but from what I saw, it looked like it could be released next week. A lot of work has already gone into Fallout 3, which has been in production since 2004, from the fine graphical details to the compelling, well thought out gameplay. But ever the perfectionists, Bethesda still have their work to do, so let them do their thing.

In the meantime, ponder this: between areas, the loading screen will display various character stats and figures, like how many miles walked. One of the stats was simply “Corpses eaten.” When asked about that fascinating statistic, Todd Howard smiled and hesitated before refusing to go into more detail. But I’ll say this much: any game where you can eat a corpse is worthy of your attention, and Fallout 3 from Bethesda Softworks looks like it’s definitely going to be worth the wait.