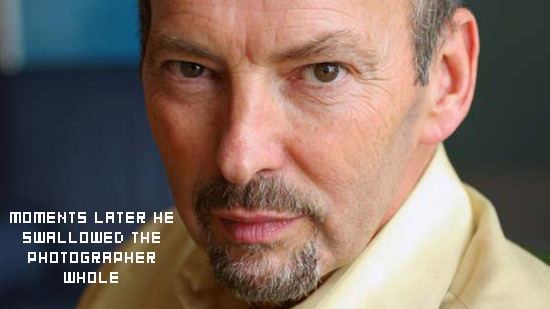 GameTap — Ted Turner’s answer to the high price of videogames and people who still think his wife sold us out to the Vietcong — has been diversifying their portfolio as of late. Not content to merely be a phenomenal PC gaming service, they’ve broadened their reach into film, original content and apparently the world of games journalism, as demonstrated by a recent interview they conducted with Peter “I swear he can see my soul” Moore on the topic of EA’s upcoming trivia title GameShow.

Hit the jump for choice quotes, and another instance of that picture (mostly because I’m sort of terrified he might come to my house and steal my soul if I don’t continually worship it as my new deity).

GameShow — a title I knew nothing about until reading this Q & A — strikes us as a blend between an MMO (with the requisite live staff and constant content updates) and the You Don’t Know Jack series. To hear GT describe it:

Game sessions are short, lasting only 15 minutes; controls involve nothing more than pushing a mouse around a PC screen and clicking to compete; and the content isn’t canned, but rather created daily by a team of writers and radio-like DJs who “talk” players through trivia questions that can be tied to upcoming events or recently completed sports competitions.

Intriguing, no? At the very least it stands a good chance of stealing market share from those crappy trivia game setups in your local sports pub.

So why is EA focusing on something other than the latest Tiger Woods golf game or how many copies of Michael Vick’s Pro Dog Wrestler they’re going to sell this year? Pete, what say you?

GameTap: So the key to broadening the EA Sports brand is what?

Peter Moore: I think the key is, if you look at the consumer and you look at what is important to the new consumer of today, do you have as much relevance in the life of a consumer that Nike and ESPN does? Do you give them an experience in sports that is different, unique, and certainly nothing that anybody else can do inexpensively? And is today’s consumer more interested in interactive entertainment and more interested in not just sitting back and watching but actually diving in and taking part? I don’t think anything really matches EA Sports.

That’s all well and good, but what makes GameShow so special? How is it going to drag people away from their Sudoku and their bong rips?

GameTap: Tell me about GameShow and how that product fits in with the new face of EA Sports?

Peter Moore: When I think of GameShow–and I actually saw GameShow when I was at Xbox and I was excited about the opportunity–I think of its interactivity. If you understand the concept, we’re building–have built–a studio in Orlando where we have live DJs that will be hand selected for their irreverence, for their knowledge of sports, for their sense of humor. And it’s not just offline software product. It is actually giving you banter back and forth with the DJ.

Secondly, I think it’s addressable to everybody. Everybody loves trivia. We all watch Jeopardy. Most of us love sports. And boy, I’ll do any kind of trivia game because–and I don’t know whether it’s ego or whether it’s “I know the answer to these things.” I love to be tested. When I talk to people, it’s almost an irresistible experience.

Well, good answer. I guess he’s got everything wrapped up, but where does he see EA headed in the near future?

GameTap: Tell me a little bit about the image or the picture of EA Sports three to five years down the line.

Honestly kids, my copy/paste hand is cramping up, so I’m going to make you hit up the GameTap interview if you wanna see more. While we’re reserving judgment on GameShow based on EA’s past history of running series’ into the ground with their teat-chafing business practices, the ideas they have for the thing should be quite appealing to the casual market, at the very least.

Also, if you don’t buy it, Mr. Moore is going to cut you in half with his optical lasers.

God, that noise was so much more fun before it went memetic. Internet, I hate you.