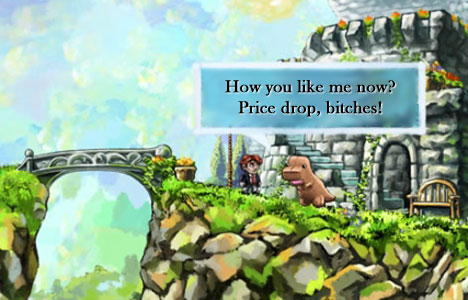 When Stardock announced that it would be selling the PC version of Braid online for $19.99, the Internet went cuh-ray-zee. I mean, the game only cost 1200 MS Points ($14.99) on the Xbox LIVE Arcade, so what the hell, right?

Everyone relax — the game’s price has been dropped to $14.99. Stardock’s Director of Publishing, Brian Clair, says that even if you pre-ordered the game at $19.99, you’re still only going to be charged the updated pricing. Yay!

So why the price drop? Because you guys bitched, that’s why. And the game’s developer, Jonathan Blow? While he originally tried to price it in line with other successful indie games on the PC (World of Goo or Aquaria, for example), he just doesn’t care what it costs, really.

“The XBLA version was nicely profitable,” he writes on the Braid development blog, “and my goal with the PC release is mainly to get the game out to a wider audience.”

“But ultimately, I would rather have people talking about the game itself, what they like or dislike about it, than about how many American Fiat Currency Dollars it costs,” he concludes.

PC gamers and the five dollars they’ll save thank you.