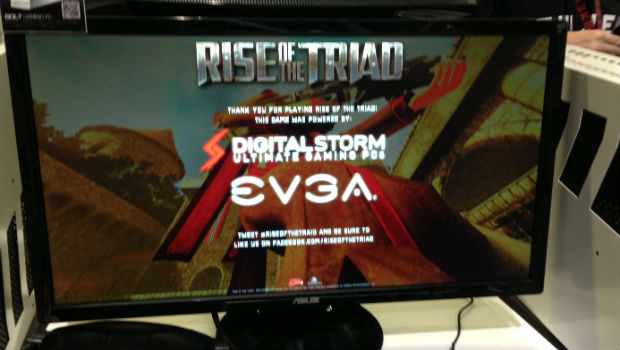 If you’re itching for an arena shooter, this is it

I had an interesting discussion a week ago with the gaming community regarding arena shooters vs. “loadout” shooters like Call of Duty. Although I’m a fan of both, there’s something special about memorizing a level layout and learning the ins and outs of every map’s little nuances — also known as level study.

Rise of the Triad is pretty much going deliver on pretty much all fronts  if that’s what you’re looking for. The demonstration I played was an FFA deathmatch with five other players, with the balanced character, who has medium health and speed ratings. Even at medium speed, the game was pretty damn fast, and memories of old shooters like Unreal Tournament and Quake instantly rushed into my head.

Gameplay, as you can imagine, was pretty simplistic — in a good way. Search the level, find the best guns, and blast people away. In addition to multiplayer, there’s going to be a classic style campaign, that will last around 5-6 hours for most players.

The game will also be fully moddable, which is great news for people who want to create their own custom servers. Plus, representative Dave Oshry confirmed that there will be free DLC for the game.

I was also able to confirm that Dog Mode and Shrooms Mode would be making a return, as will the “ludicrous gibs” style exploding limbs, the Excalibat, and the God Mode pickup. Yes! The game is nearly done, and will launch later this year for $14.99 on Steam and GOG.com.

Filed under... #Impressions#PAX#Rise of the Triad