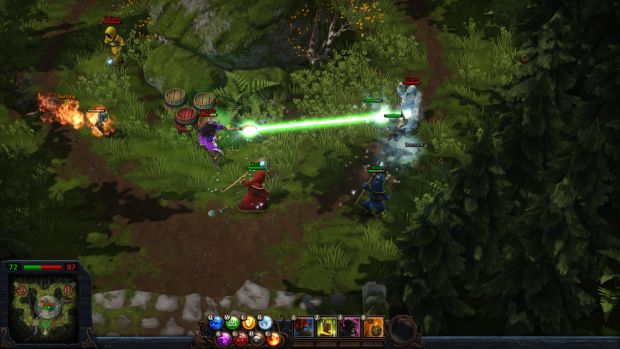 ‘We do not want to monetize on people’s frustration’

Magicka: Wizard Wars is Paradox Interactive’s take on the MOBA genre. While most companies have had trouble getting a foothold in the market thanks to how dominating League of Legends and Dota 2 are, Wizard Wars looks to have a better chance establishing itself with how it’s offering more bite-sized MOBA battles.

“It looks like we’re jumping on the MOBA bandwagon as the same time as everyone else, which I see how it looks from the outside, CEO of Paradox Interactive, Fredrik Wester, told me at their annual showcase last month. “We discussed though building a bigger PvP version of Magicka because so many people were asking for it. Magicka is basically built for PvP, especially if you have friendly fire. I think that is one of the key selling points for us. You can’t just go in like you do in League of Legends, I play a lot of League of Legends, and you go in there with everything that you have, and you don’t have to care about your teammates.

“Magicka you have to watch your teammates. If your teammate is low on health you can’t just throw a fireball in his general direction because you’re going to kill him. We are also focusing more on 10- to 20-minute matches. I never play classic League of Legends no more because some games can take an hour. I don’t want to spend that in one competitive game. Even ARAM, which is their short game mode, takes 25 to 30 minutes to complete, if it’s not like a total steamroll.”

Magicka: Wizard Wars is available right now through Steam Early Access, and you can gain access through three different founder packs. There’s no monetization implemented yet as they want to work out all the bugs and errors before charging people anything. Eventually the game will open up completely with free access, and their free-to-play focus will follow what Riot Games and Valve have accomplished with their titles.

“We do not want to monetize on people’s frustration, when people are angry because they lost their lives. We want people to pay for things when they’re really excited to play more of the game.

“What we see as a good way as monetizing is the way Dota 2 or League of Legends does it. It doesn’t change the game, it’s not going to be a game winner for you. It’s going to change the appearance of your character, [for example]. It’s still [about] the inherent skill that you have.

Free-to-play has been a big trend in the gaming industry, and for Paradox they’ll be going that route only “when it makes sense,” Fredrik told me. “I think “free-to-play” is more of a marketing initiative than it’s actually a sales or business model initiative. We might go free-to-play with more games if it makes sense.

“It’s most of all respect the gamers. We don’t want to monetize when people are frustrated. That’s the nightmare for me, that it’s going to be like the old arcade halls that you’re so frustrated, you died for the fifth time in Gauntlet and then you have to buy a new life to get back in the game. That’s not how we work. But if someone wants a new cool helmet, it doesn’t do anything for you, you just look like this totally cool guy, then I like it. I buy a lot of skins in League of Legends for example. I’ve spent probably $150 so far. It’s a good model, I feel good about spending money.”

Check back later today for an interview with Fredrik Wester covering the history of Paradox Interactive and their future plans as a company.