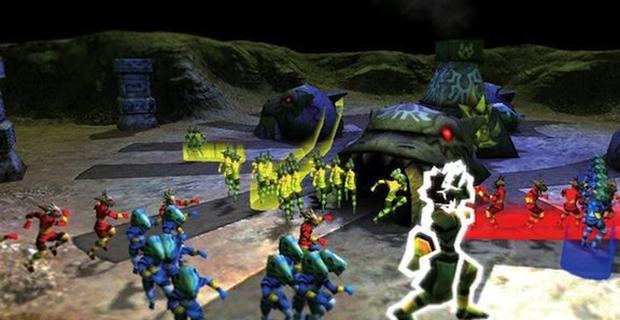 Well, they finally did it. They finally made a game that looks like a cross between Pikmin and Space Channel 5. On top of that, Orgarhythm is being developed by Neilo, a studio formed by one of the lead programmers of Shenmue. It’s bound to move quite a few units based on that pedigree alone.

I’m not kidding about the Pikmin thing. Everything about this game, the perspective, the red, blue and yellow “troops”, the battles with large, dominating bosses that can effortlessly toss your army around like they were a bunch of paper dummies — it all just screams “Pikmin”. The big difference is, the colorful soldiers of Orgarhythm all look like physically fit dudes, and they all love to dance. At least, that’s what I’ve gathered from this trailer. It’s one of those weird “concept” trailers that is a little bit hard to read. Tell me if you see anything I missed.

Let’s hope we hear more about Orgarhythm sometime soon. The game is planned for release on the PSP in Japan and on the PS Vita in the U.S sometime this year.