At some point, there will be an HD Zelda game and, for our sake, I hope it does away with the constant hand-holding and extended intros that were present in Skyward Sword, among other games.

Right now, none of us have any idea what Nintendo has planned for the next coming of Zelda on the Wii U, but one thing’s for sure — I hope it looks to A Link Between Worlds for guidance. 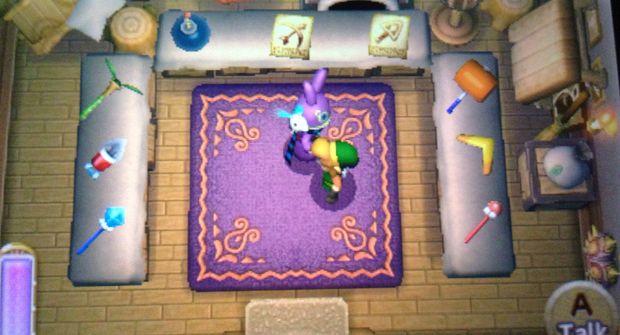 One of the chief complaints I’ve heard from non-Zelda fans over the years is that “the intro area is too long and isn’t fun to play.” And you know what? They’re often right. Twilight Princess’ goat wrangling mini-game that goes on for eons and Skyward Sword‘s movie-length Skyloft sequence immediately come to mind, but those aren’t the only problems in those games. They also gate off a ton of areas and content, making it less of an “adventure” and more of a series of “levels.”

A Link Between Worlds does away with all of that by throwing you into the fold in a little under five minutes, tasking you with an interactive intro dungeon to get your feet wet. Instead of mingling with your childhood friends for 45 minutes and using hawks and fishing rods to run errands, you’re basically put right in the thick of things. It’s a design change that not only keeps things exciting the first time around, but more bearable for repeated playthroughs (and Hero Mode, which is included in Between Worlds).

Following that, the game basically says “have at it,” and throws you into an open world modeled after A Link to the Past. But it also does something that no other Zelda game has done before — it allows you to buy every core item at the very start of the game. I know what you’re saying — “wait, hold up, what? Every item?” For the most part, yes. A Link Between Worlds lets you buy every item you see above, including the iconic Hookshot, Bomb bag, and Bow, right away. As long as you have the money for them, you can grab anything in sight like it’s a Hyrulian fire sale.

There is a caveat however, as you’re just “renting” these items until your death. But since I completed the game without dying once (fairy bottle resurrection doesn’t count as death) I never had to actually return them, and just had them with me the entire time. It not only felt empowering, but it also added a sense of adventure that many games are missing when they gate off multiple areas. There’s still some gating for narrative purposes, but for the most part this renting mechanic does live up to its promise of freeing up exploration.

Nintendo has already mentioned that they’re planning an increased amount of freedom in the Wii U Zelda, and I hope they look to their most recent 3DS game for a few ideas on how to approach that. While the very first Zelda game threw you into a true open world at the start, many games over the years have gated off content far too strictly, or dangerously over-explain everything to the point where there’s no sense of discovery. I will never forgive Skyward Sword for ruining a puzzle in the final dungeon of the game.

But item renting and welcomed streamlining doesn’t encompass the entirety of A Link Between Worlds, so be sure to check back on Thursday to see how the rest of the game fares in my review.