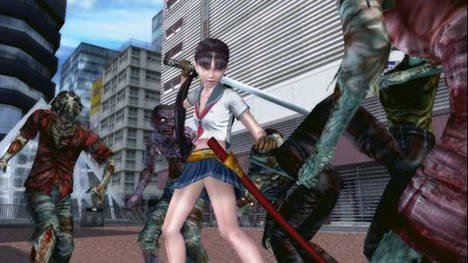 Onechanbara: Bikini Samurai Squad, in addition to having what may very well be the best title for a game ever, has become quite the cult hit in Japan. Now, America is finally going to get to see how incredibly awesome chicks killing zombies in skimpy clothing is too. As if we didn’t know already.

An action game in the vein of Devil May Cry, Onechanbara follows two sisters (one in a bikini with a cowboy hat, one in a schoolgirl uniform; an attempt to please as many of us as possible) who go on a blood-soaked rampage through hordes of zombies. The faster you kill, the faster and more powerful your attacks become.

Based on what I’ve read about Onechanbara: Revolution, the original Wii release of the game, has been pretty positive in regards to using the Wiimote. It seems like D3 has found a way to make good use of the control scheme. Still, I’m glad it’s coming to 360 so I won’t wind up wearing my wrists out twice as fast.

For those of you who are interested in performing a vigorous shaking motion with your hands while scantily-clad women become covered in ichor, their chests heaving as the mountain of undead grows higher, there’s good news for you too. The sequel, Onechanbara: Bikini Zombie Slayers is also slated for a US release on Wii. Expect both in early 2009.

[Via GamesRadar — Thanks, Action Bastard!]