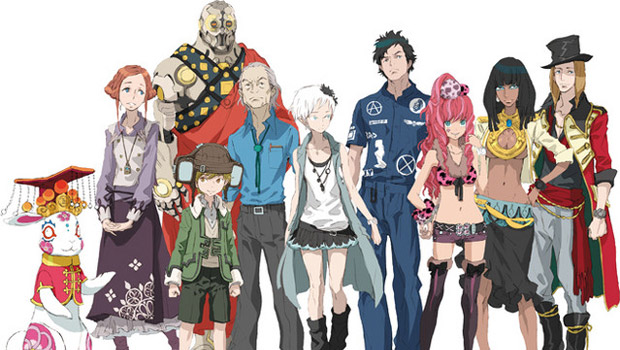 I absolutely love Chunsoft’s 999: Nine Hours, Nine Persons, Nine Doors. It is my personal pick for best DS… nay… best game period of 2010. Have you played it yet? If you love text adventures or visual novels, or are in the mood for a mindf*ck thriller that will blow your brains out, scoop the chunky scraps back into your skulls, then blow ’em out again, you owe it to yourself to buy this game yesterday.

Well, Chunsoft is at it again, bringing back the 999 team for a spiritual follow-up to be released on both the PlayStation Vita and the 3DS. It’s called Gyokugen Dasshutsu Adv: Zennin Shiboudes, which translates to “Extreme Escape Adventure: Good People Die.” Damn! Sounds promising already!

The game, which will be fully voiced, will have a similar setup to its DS predecessor: a college boy named Sigma awakens in an elevator next to a girl named Phi, who has some unknown connection to him. The two discover they have been trapped in a warehouse along with seven other characters, and together they must solve room-escape puzzles to locate the exit. There’s also a talking rabbit.

The game is only half finished, with no release date yet announced, but if there is any justice in the world, Aksys will localize this baby with all the same care it bestowed upon 999.