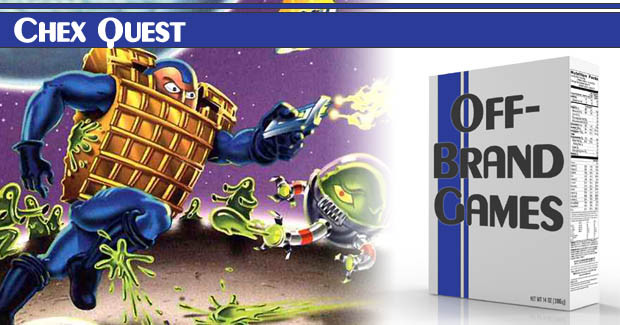 [Community blogger megaStryke likes to play old games that ripped off other games for his Off Brand Games feature. — CTZ]

It wasn’t that long ago when just about every item on store shelves came packed with some cheap promotional crapware. Every box of cereal, every magazine, every pack of Maxi pads had a CD or DVD stuffed in a flimsy plastic sleeve or an offer to obtain one in exchange for an obscene amount of UPC labels. On those discs were cheap-o edutainment shareware, PlayStation demos, or a couple of episodes of some underperforming children’s show. And let’s not forget all those bullshit AOL trial CDs which were only ever useful as wheels for my mousetrap car in my 9th grade engineering class.

Rarely would any of these wastes of pressed plastic entertain a child for more than five minutes. What can you offer for the rock-bottom price of free without severely cutting into any profit you’d hope to see from selling an extra box or two of Cheerios? The only things that grab kids’ attention anyway are big licenses like SpongeBob SquarePants or soulless, effects-driven cinema pap, and those never come cheap.

There must have been some allure to this marketing madness. Whoever pioneered it must have scored so big that other companies couldn’t wait to jump on the fadwagon.

In 1996, General Mills wanted to make sure children the world over couldn’t start the day without a truckload of Chex cereal funneled down their throats. They needed some way to convince kids that Chex was rad and that it totally did not taste like cardboard. Kids love them some videogames, especially that there DOOM business. How can we combine the wholesome morals of DOOM with the nutritional value of Chex?

I’m cheating a bit with this one, violating one of my self-imposed ground rules. The makers of DOOM, id Software, willingly provided the tools for this project and are thus indirectly responsible for its creation. However, the history behind Chex Quest is so unique and the game itself so strange that I think an exception can be made.

General Mills hired Digital Cafe, a media company that specialized in contractual programming and design work for advertising purposes, to develop a PC game that would be included for free in boxes of Chex cereal during a three-month promotion. The nearly six million copies of the game were sold out in just six weeks, increasing sales of Chex cereal by almost 300% and shattering everyone’s expectations.

Several factors played into the game’s success. Most importantly, it was the first case of a cereal being bundled with a videogame, so the novelty of free software was a huge draw. Secondly, Chex Quest it was a robust game with plenty of challenge and replay value, not half-assed in the least. Digital Cafe obtained the DOOM engine license on the cheap while AOL footed the production costs in exchange for the inclusion of an AOL trial on every CD. With that level of financial support in addition to a massive advertisement campaign that spanned from magazines to newspapers to television, anyone with eyes and ears became aware of Chex Quest.

Now, how in the world do you take an ultra-violent property like DOOM and not only tone it down for the Saturday-morning cartoon generation but also integrate Chex cereal in a sensible manner? Like this:

I guess the answer is no, you can’t integrate breakfast cereal into a one-dimensional sci-fi spoof without it feeling forced. You are a giant walking, talking Chex square for chrissakes! This is the epitome of crass commercialism! It’s worse than that game about Skittles!

It’s DOOM. It’s not similar to DOOM. It’s not in the same vein as DOOM. It doesn’t visit the same barber as DOOM. Since the game is a total conversion mod of DOOM without any core gameplay changes, it literally is DOOM.

What we have here is a clone in the truest sense of the word.

But is it any good? Well… to be quite honest… yeah, it is. If you like DOOM then this game is the gore-less German edition. Changes to audio and textures aside, you’ve got weapons with identical functionality, enemies with identical behavior, secret rooms, ammo caches, yadda yadda. The only real difference is that Chex Quest is a scant five levels long while DOOM just drags on and on and on. I personally prefer the abbreviated game length.

Instead of conventional weapons in this game, you use Zorchers. Rather than fragging the evil Flemoid scum, Zorchers send them “to another dimension.” Are you picking up a Dragon Ball Z Ocean Group dub vibe? I know I am.

You are probably wondering about this game’s version of the BFG 9000, the Large Area Zorching Device. Heh heh, never mind that shit. Let me tell you about the real star of the show. You know how in DOOM your punch ability is replaced by the chainsaw? In Chex Quest, you start with a rather useless spoon and upgrade to a kickass spork. A spork. A SPORK. Did you not hear me? A fucking spork! This may very well be the greatest weapon in the history of gaming!

The funniest part about this game has to be the health pickups. You regain energy by drinking glasses of water, eating bowls of fruit, and ingesting a nutritious breakfast. Eat your veggies, kids! It’ll build your strength to ward off the impending alien invasion! The game’s backstory also establishes that nutritious foods strengthen the Flemoids as well. It makes me wonder if any of the crack scientists at the Intergalactic Federation of Cereals (my God, that was hard to type) thought of throwing doughnuts and chocolate bars at the enemies rather than wasting precious time and resources developing an array of zappy guns in a convoluted scheme to send them… TO ANOTHER DIMENSION!

That’s really all there is to say about the game. There was a sequel released shortly afterwards which was only available through the Chex Quest Web site for a limited time. Like DOOM II and Final DOOM, it plays like an expansion to the original with the only difference being a few new enemy types. I could never stand putting too much time into the DOOM follow-ups, so Chex Quest 2 similarly couldn’t hold my interest for long.

I must bring up the insane fan following that formed around this game. There have been fangames, DOOM wads, the works, all because of a cereal box pack-in. The community is so vocal and passionate that in 2008, years after Digital Cafe had been dissolved, one of the original team members went ahead and made an official Chex Quest 3 as a way of thanking the community for their continued support.

IT’S A BREAKFAST CEREAL, YOU NIMRODS! Get the fuck over it! Holy shit! It’s like a friggin’ cult!

All this talk of cults and cereal makes me kinda hungry. In fact, for some peculiar reason, I’ve been having Chex cravings the past couple of days. I dunno why.

Oddly enough, I have never had Chex cereal in my life. Oh, I’ve had Chex Mix, but never the actual cereal. I’m a little hesitant to try it now, what with my assumption that it tastes like cardboard and all. But then I think… why isn’t there a Chex Mix cereal?

You all remember Rice Krispies Treats cereal? That was delicious! What happened to it? Has it been discontinued? Man, it was great! Regular Rice Krispies are just so bland, but when you add marshmallows and margarine you get a yummy after-school treat! And when you take that yummy after-school treat and mark it part of a balanced breakfast? Heaven!

Here we have precedence of a breakfast cereal based on an afternoon snack based on a breakfast cereal. You can apply the same logic to Chex Mix. The stuff is served in bowls as it is, so half the work is done for you. All you need to do is add milk. Instant deliciousness, if my calculations are correct. Someone needs to get on this.

You know what? I’m so fucking on this.

There are so many different varieties of Chex Mix out there that I had trouble picking on a single flavor. I settled on two, the traditional mix for those who like a little spice in their fast-breaking and the honey nut mix for those craving a hint of sweetness. I’ll be sampling both on this lovely morning.

Yeah, I know. I know. Lactose-free milk. Fuck you. Don’t judge me.

I’ve got my spoon ready. Let’s zorch these bitches and send them to the dimension in my belly! First up, the traditional.

Surprisingly, the combination of garlic, onion powder, and dairy did not induce a vomiting frenzy. The milk dispersed the spices, yielding a more subtle flavor. Once the cereal was gone, I was left with some rather unusual but strangely satisfying onion milk.

Next up, some honey nut goodness.

This guy was a lot more breakfast-y. Not too sweet, but just sweet enough. There was no spice kick this time, so I could enjoy the interplay of the pretzel wheels and vanilla breadsticks to the maximum.

My verdict? Box this shit up and distribute it to your neighborhood grocery store. It’s the next big cereal craze. We haven’t had one of those in a while, but I think we’re about due for a revival.

Word of warning, this stuff is filling. I had two half bowls and I was already feeling a bloated near the end of the first one. Then again, who is really going to eat two bowls in a single sitting? Also, remember to complete your meal with a serving of fruit and a glass of delicious orange juice. Gotta get that vitamin C!

Anyway… ummm… what was I talking about before becoming distracted? Oh yeah, Chex Quest. Give it a shot. It’s freeware. Enjoy it with a bowl of Chex Mix cereal by your side.