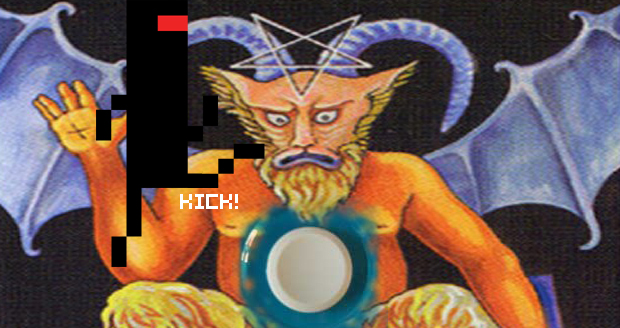 The phenomena dubbed by prophets as “Nubageddon” continues to rock the videogame world. Foretold as bringer of the end of Nintendo’s world sometime 2012, the 3DS slide pad attachment is perhaps the most controversial thing any videogame developer has ever done ever. Ever.

Now that we’ve actually played with the thing, heard some positive words from Activision about it, and gotten a fresh perspective from a totally random woman, it’s looking more and more like the slide pad may not actually lead to the death and dismemberment of Nintendo and its fans. Our friends at Gaijin Games (creators of Bit.Trip Saga and Bit.Trip Complete) still aren’t into it though. Company CEO Alex Neuse says that he “…think(s) it’s total crap. I’m very frustrated as a consumer. It seems obvious to me that it’s only a matter of time until Nintendo releases a new 3DS with a second Circle Pad on it, and then what am I going to do? I’m going to give them more of my money. Like I always do.” As a developer, he has even more issues with the thing, stating that “… it’s a bummer whenever first parties come out with something like this. Whether it’s the Expansion Slide Pad, Wii Motion Plus, PlayStation Move, or Kinect, developers have a hard decision to make about whether they want to support the new features of the hardware.“

Sounds like Mr. Neuse has some reasonable misgivings with the slide pad, but he isn’t ruling out buying it or developing software for it either. His feelings make sense. I can imagine that if the 3DS had 2 nubs to start with, he may have been able to implement some local multi-player in the games on Bit.Trip SAGA, making the package an even better value for the consumer. Still, as long as the slide pad isn’t a required purchase for any game, I don’t see the harm in giving players the future option to shell out so extra dough for double nub.