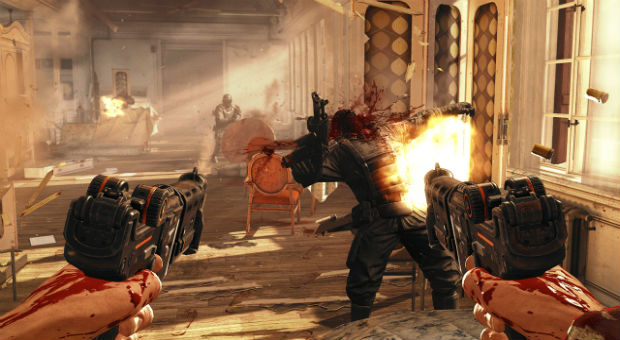 I’ve got kind of a thing for Wolfenstein 3D, since it was one of the first PC games I ever played, but also World War II and alternate histories in general. So excuse me while I indulge in some inappropriate levels of excitement about “Nowhere to Run,” the latest Wolfenstein: The New Order trailer.

The trailer opens with Martha and the Vandellas’ “Nowhere to Run,” doing the whole juxtaposition of cheery pop song against dark imagery (Halloween II did this so well with “Knights in White Satin,” for real) and a soccer player getting shot in the face. Nazis hate soccer, and anything fun. More so than Nazi evilness, this trailer showcases some explosive future weaponry, as well as some nefarious Nazi experiments, which I want to see more of, a la Frankenstein’s Army. Also, mechs. Delicious mechs.

B.J. Blazkowicz is in rare form. ‘Cause no one can make him die. No one can make him cry. But you can buy Wolfenstein: The New Order on May 20 for Xbox One, PlayStation 4, Xbox 360, PlayStation 3 and PC. Coincidentally, my birthday is May 18. And you might think this game is worth a dollar, but I think it’ll play like a millionaire. Plus, it’s spawned some pretty swanky ’60s-styled tunes.