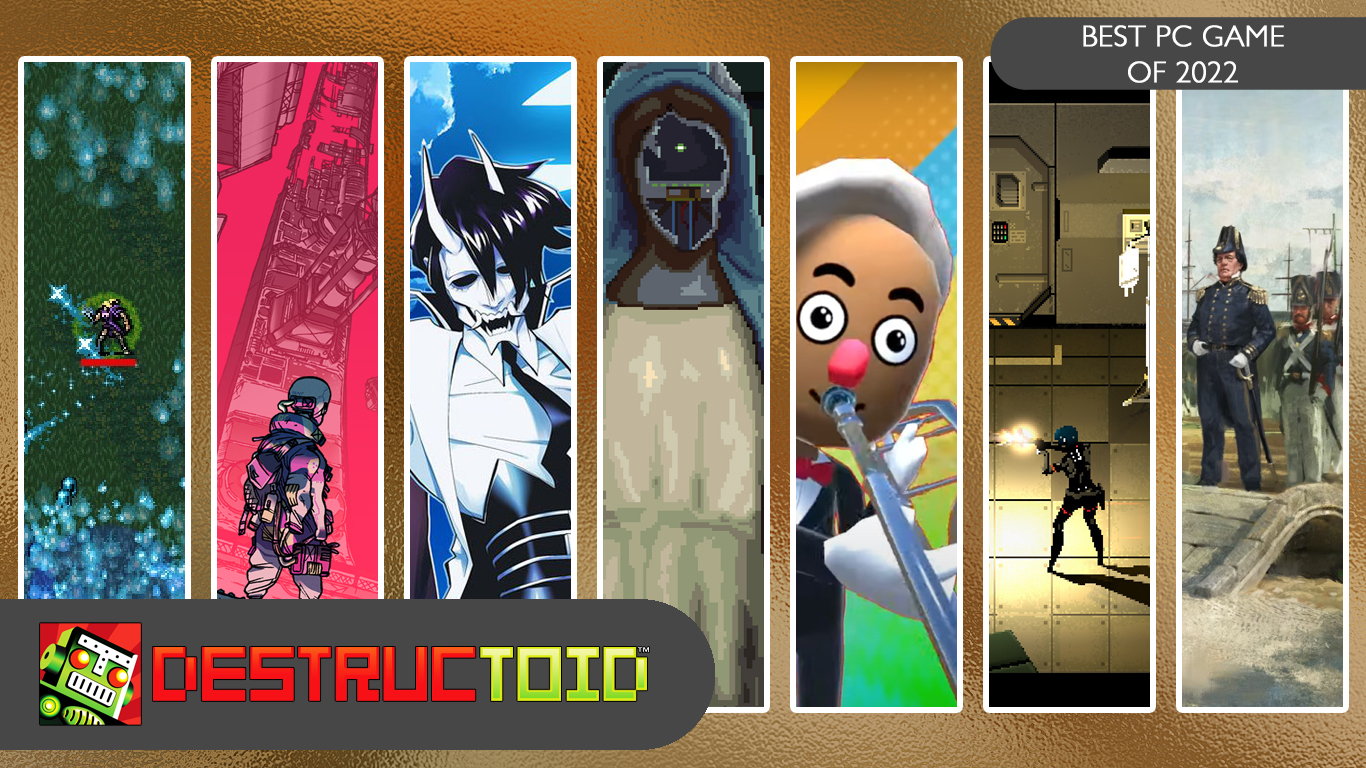 As someone who heretically prefers to play games on a controller, PC may not always be my first choice. But even I have to admit that it’s a platform that has some of the most compelling releases of the year, every year. When it’s easier for small, independent teams to publish to platforms like Steam or itch.io, the cream usually tends to rise to the top, so that PC is always one of the most stacked “best of the year” categories, in my opinion. 2022 was no exception, because this banger-filled list is making it really difficult to try and decide which game is gonna take my vote.

First you’ve got Signalis, which is not only an awesome tribute to classic horror games like Silent Hill and Resident Evil, but also one of the most stylish and heart-wrenching games I’ve played in a long time. Everything from the art style to the soundtrack to the puzzle design elevated the creepy, slow-burn atmosphere, and it’s a game I’ve been left thinking about weeks after having put it down.

Citizen Sleeper is yet another innovative title that released in 2022 among a swath of other games that are moving the medium forward. Its focus is on a tabletop-inspired, dice-centric narrative, and it executes that premise with all of the polish you can imagine. What it is able to achieve in unique yet somehow familiar gameplay, it also wins you over with its stories, even after leaving us with some mysteries to explore on our next adventure.

For all the shoot ’em up fans out there, Vampire Survivors has you covered. The game has minimalistic art and gameplay design, but with good reason — the gameplay loop is so well-designed and lean, it doesn’t need any of the extra fluff. It’s one of those games that’s perfect to sit down and play in little bouts, but every time you do, you know you’re gonna have a blast. Vampire Survivors snuck up on me for sure, but it did indeed turn out to be one of the highlights of 2022.

Trombone Champ is the obvious stand-out of the year. At a glance, it’s not a game I think any of us would have expected to appear on a list like this, but when you look more closely, it’s all there. It’s simply a well-designed rhythm game (going so far as to actually imitate how it feels to play a real trombone with a scary amount of accuracy), the visual style is downright hilarious, and the soundtrack has the perfect lineup of songs that you’re either super familiar with, or make you go “I know this song but I never knew what it was called.”

It was one of those ideas that the team would make or break in its execution, and they absolutely nailed it. If nothing else, the entire gaming community’s reaction to Trombone Champ is enough to warrant its place on this list, I think, because there was something magical about seeing a game collectively bring all of us joy upon its release.

If you’re not a speedrunning person, you will be after playing Neon White. While you can really take or leave the story, the gameplay alone is enough to land Neon White on this list. It’s bombastic, it’s creative, and of course fast-paced, and it’ll make even the most tepid players (aka me) twitching to set a new record. This title is really able to capture the raw, tactical fun that only tightly-designed gameplay can really deliver, and is maybe the best game to do so since the release of Hades.

Then there’s NORCO, which is easily one of the weirdest games of the year, in the best way. It’s a Southern Gothic point-and-click narrative set in the marshlands of New Orleans, and let me tell you, it is one wild ride. NORCO has absolutely beautiful prose and breathtaking pixel art, and then you’ll encounter one of the most strange set pieces you’ve likely seen in a game in a while. I found the game incredibly moving, and easily one of the best narrative games of the year. If nothing else, it simply deserves more eyes on it, because it was an absolute delight to play.

Last but certainly not least, we have Victoria 3. It may not be for everyone, but for those who are fans of grand strategy games, the newest release from Paradox Interactive is considered a truly great title. The cult following of the Victoria series has been long-awaiting the series’ third installment, as Paradox themselves call it “one of the most anticipated games in Paradox’s history.” The general consensus is that Victoria 3 did in fact live up to the hype, making it one of the best grand strategy games to come out in recent years, and certainly in 2022.

Here are the nominees for Destructoid’s Best PC Game of 2022: