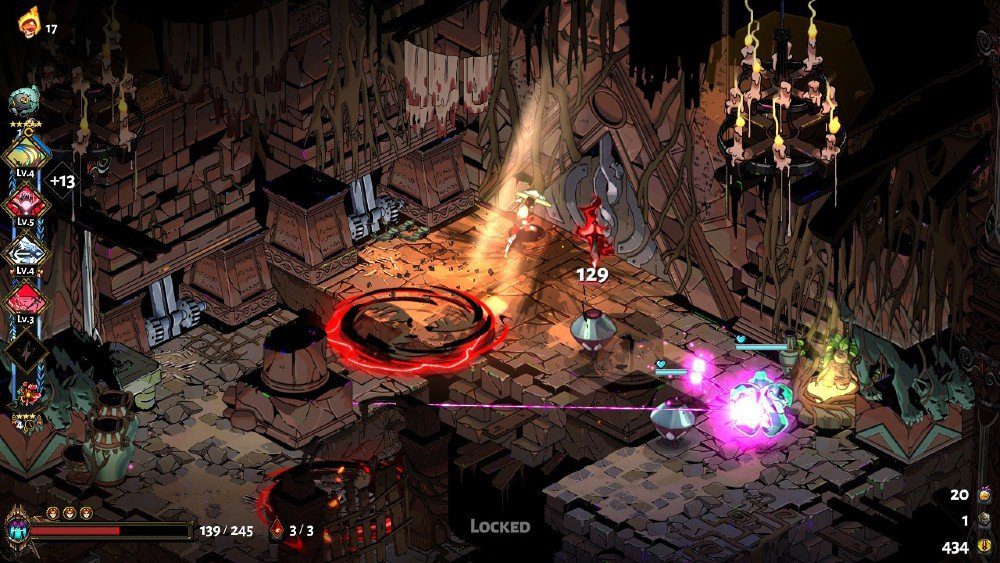 Ares would be so proud

Hades was love at first sight for me. It has the bright and stylized art that I love, roguelikes are one of my favorite gameplay genres, and I was one of those Greek mythology kids who was obsessed with the Percy Jackson series growing up. Check, check, and check. My immediate enthusiasm for the game may have been predictable, but the fact that I’m still playing it over 250 hours and 200 runs later? Not so much.

Developer Supergiant Games released three games prior to Hades, and each one was an indie darling. The studio has racked up dozens, if not hundreds, of awards since their debut in 2011, and they’ve also been lauded for promoting a healthy work-life balance for their employees, something that’s not very common in the games industry. 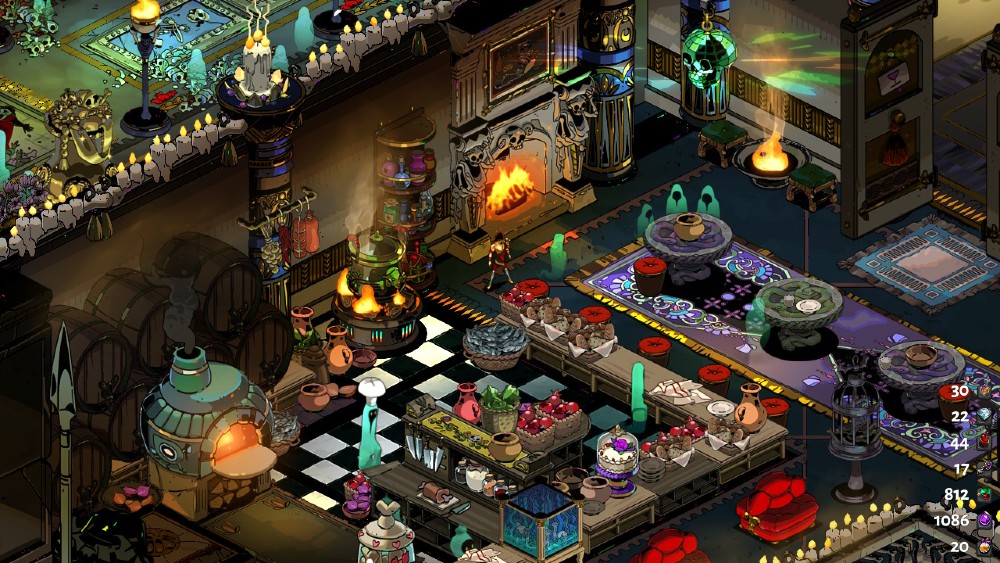 While Supergiant’s track record is one for the ages, Hades is their best game yet, an amalgamation of the best their previous titles have to offer — the narrative flair of Bastion, the satisfying, punchy gameplay of Transistor, and the genre-bending of Pyre. Considering the title is fresh off some pretty huge wins at the BAFTAs, it seems like most people agree.

Hades really is a masterclass in excellent game design, and the easiest way to tell is that it’s fun all the way through. From the moment I picked up the controller, there wasn’t any point in the game I was wanting to rush through to get to the good stuff. You already have the core gameplay, which is so solid,  and you can really feel how much love and care went into it. On top of that, you have this colorful cast of characters coming to life, with their snappy dialogue and engaging storylines.

The most surprising additions to me, though, were the inclusions of the dating sim and decoration mechanics, something I certainly wasn’t expecting from a roguelike. What a great choice the developers made, because after finishing a run, feeling either frustrated or satisfied based on how it went, I would be so excited to check up on my friends or buy the new upgrade for the house I had been saving for. Every moment was delightful, and I love this game for it. 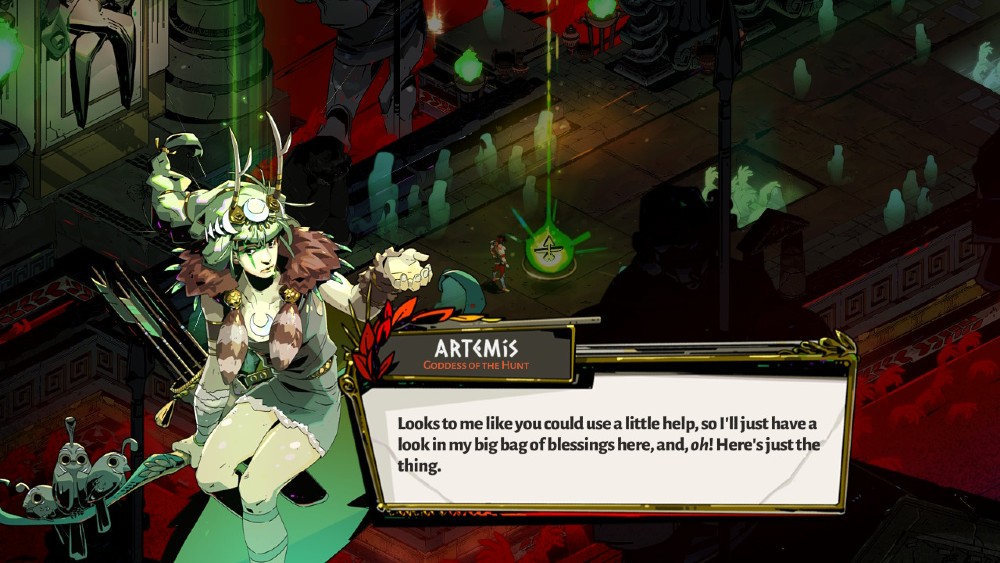 Speaking of the house, it’s not just a place to kick back and enjoy the Ambrosia — its effects on gameplay are what really makes Hades stand out as the perfect gateway roguelike. Rather than just dying and restarting as if your previous run never happened, you carry over any currencies you accrued during your run. Doing so allows you to power up and get stronger, meaning you’re going to get further on your next run and get more currency to come back and get stronger. That’s a pretty pristine gameplay loop if you ask me.

So the early game is awesome, and there’s nothing better than a game you can’t put down. But Hades‘s true addictive quality lies in its late game. There are a ton of different factors in play by the time you unlock everything — thirteen in total, if my math is correct. From the boons to the fishing mini game to the Erebus rooms, I could go on and on about how all of these different mechanics feed back into each other to create an airtight system, but there are only so many hours in the day.

Instead, let’s talk about the main mechanic that has me button mashing so hard my hands get sore and popping blood vessels in my eyes because I’m focusing so hard (true story): The Pact of Punishment. For those who may not know, the Pact allows you to add optional modifiers to make the game even harder than it already is, with rewards to be claimed if you can take it.

So for example, you can choose to take more damage from enemies or have fewer options when power-ups are presented to you, stuff like that. Each individual modifier adds points to your “heat” total, and more difficult modifiers are worth more points. Simple enough. 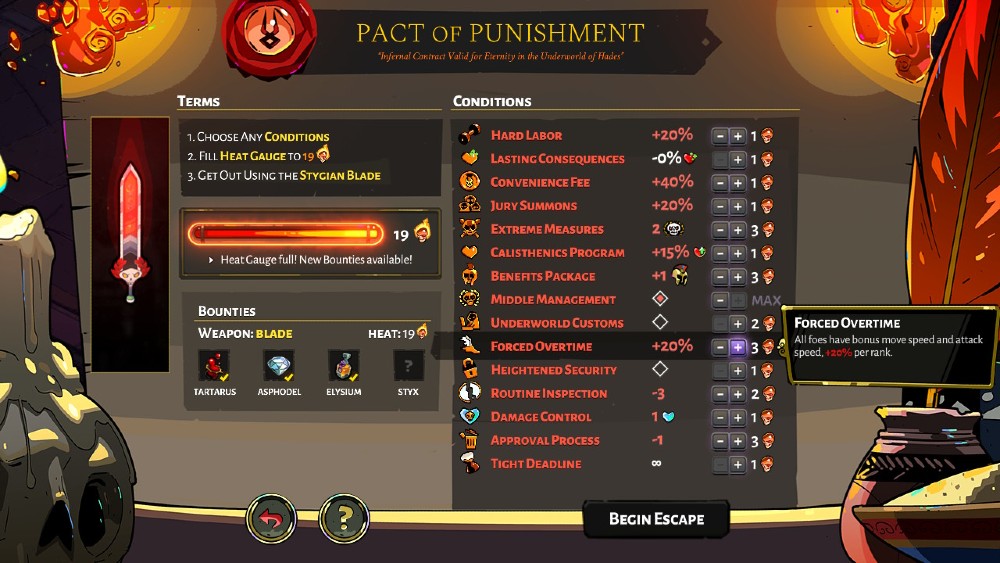 Initially, I thought there was no way in hell, or in the underworld I guess, I was going to ever use that thing. Making the game more difficult, one modifier at a time? I could barely get through the Tartarus boss fight! But like the sweet song of a siren, it called to me. And after I got confident in beating Hades every time, I decided to give it a shot.

It was rough going at first. I was dying to enemies I could usually kill without even breaking a sweat. I was staying away from Chaos gates and praying for a fountain room so I could get some health back, which had become a precious resource by this point. 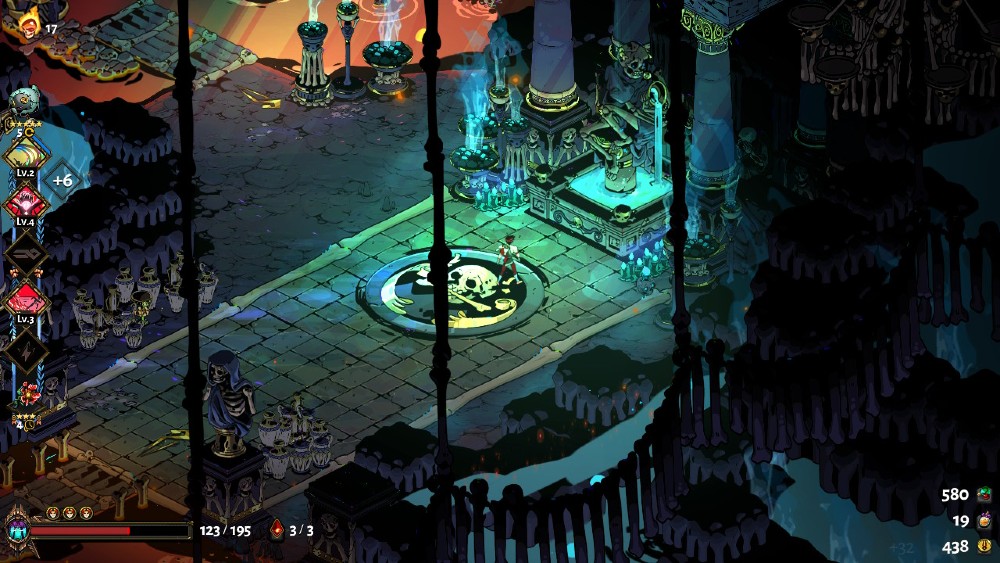 Let me interrupt myself for an aside here, but I promise it’s important — something you should know about me is that I usually wasn’t someone who liked to challenge myself in a game to the point of frustration. I like stories, I like the feel of games, but I never dared venture above normal mode.

So, Hades initially kept me coming back for the narrative stuff, the look of it, and the UX that somehow scratches an itch in my brain (I can’t explain it, but the sound of the glass orb above a door shattering when you move on to the next room makes me feel things). But now, all I care about is the rush of narrowly defeating my fictional father at the highest heat my little hands can handle. 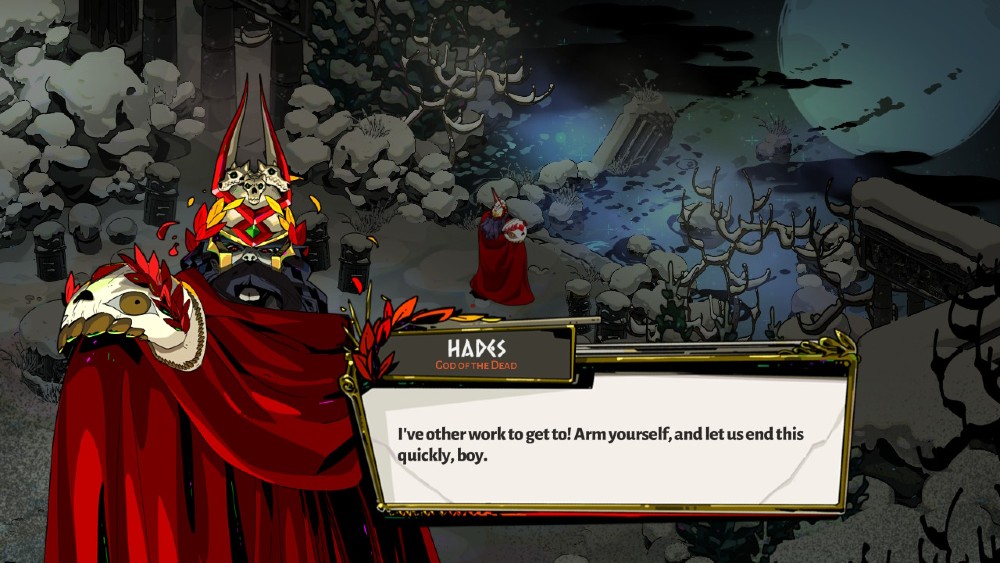 As I made my way up the heat meter, I could feel myself slowly but surely improving at the game. I was dodging into small gaps between enemy attacks, and going through multiple rooms without taking any damage at all. Instead of just taking whatever boons were given to me, I started forming longer-form strategies to min-max my build.

It wasn’t all rainbows and unicorns though — around heat 14 I thought I had hit my skill ceiling. No matter which weapon or type of build I was running, it wasn’t working, and I was getting ready to throw in the towel for good. I couldn’t go for more than two runs at a time, because my fingers would get so sore.

That was until I got one of my friends to start playing, and talking to him about it made me want to jump back in a few weeks later. I should’ve followed Supergiant’s lead sooner and let myself take a break because that’s what made a difference. 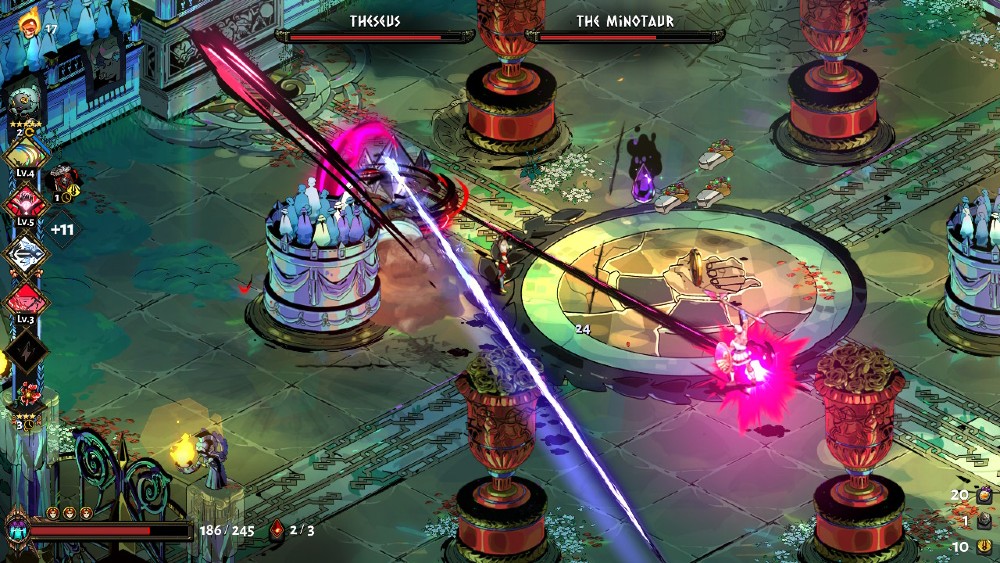 I didn’t have to think, I was one with Zagreus, and Zagreus was one with me. I was in a flow state, all the time, and that’s a euphoric feeling. I went from feeling like I was chasing the win, stumbling along the way, to being out ahead of it, attacking it even. Maybe it’s just the Dionysus boons talking, but with each successive heat I beat, I felt drunk with power.

I knew something really changed when I started button mashing through the dialogue. Who is this new Noelle? I don’t know, but I like her.

The point I’m trying to get at here is that Hades is an amazing game all around, but if you find yourself intimidated by titles like Bloodborne or Cuphead, it’s a great place to start. You’re having so much fun along the way, and the game eases you into its most challenging aspects so organically, you become a mechanically proficient player without even realizing it. For someone like me, that’s the ideal situation. 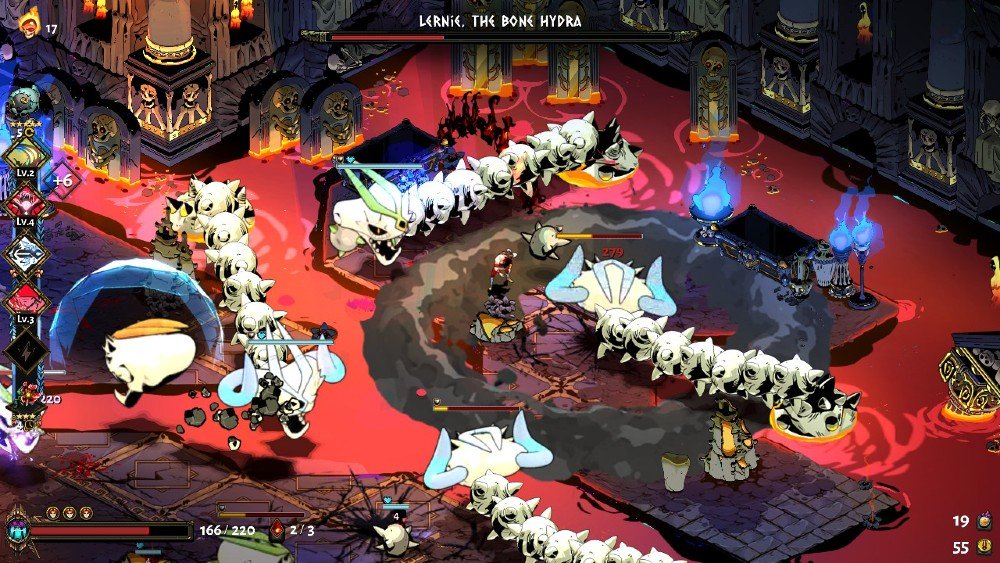 I always loved games, but Hades helped me learn to love the challenge of them, and now I feel like I’ve fallen in love all over again. I’m now sitting around 20 heat, and it’s starting to get tough again, but now I know I can push through. I feel like I have something to prove, not to anyone else, but to myself. It’s an empowering feeling.

So I’m going for that 32 heat prize. I have no idea how long it’s going to take me to get there, but I’m not stopping until it’s mine.