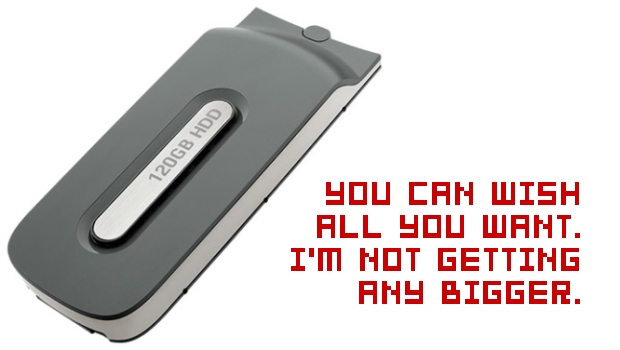 While filling up your 360’s hard drive is getting to be an easier and easier task thanks to the plethora of quality downloadable games and game demos on the system it doesn’t seem that Microsoft will be releasing a 250GB hard drive on the regular any time soon. Speaking at X10 to Joystiq Xbox Live Product Manager Aaron Greenberg said that the 250GB hard drive is going to remain exclusive to limited edition bundles like the Modern Warfare and Final Fantasy XIII ones.

“We did it with the Modern Warfare bundle, which, as people know, was a huge success, completely sold out,” he said. “We’re excited to bring it back with the limited edition Final Fantasy bundle.” He explained that it is this limited nature that makes the 250GB special editions so special and then concluded that, “We’re always evaluating, but for now we feel like the 120 is serving us very well as the standard offering, and then having the 250 as a limited edition is a good balance.”

I’ll admit that I haven’t filled up my 120GB, but I’m sure there are people out there who would at least like to see a 250GB hard drive sold by itself if not with a regular system that is readily available. Maybe Microsoft is just shying away from the higher price point that a bigger hard drive would bring.

Greenberg: No plans for 250GB Xbox hard drive outside of bundles [Joystiq]