As a paid add-on to existing memberships, this can’t be a repeat of the NES and SNES rollout

During yesterday’s Nintendo Direct, we hoped and expected to hear about Nintendo 64 games joining the Nintendo Switch Online library. But what I didn’t expect was just how divisive the addition would be — even among people who were actively hoping to play N64 games like Mario Kart 64 (with online multiplayer) and Ocarina of Time on their Switch.

The twist was that Switch Online subscribers, who pay $20 a year for what many would say are minimal benefits at best, aren’t getting this stuff with their usual memberships.

Instead, presumably because Nintendo charged so little for its online service in the first place and it now feels that it needs to course-correct before it can justify adding anything substantial, there’s going to be a new tier: the clunkily named “Nintendo Switch Online + Expansion Pack.” I’m sure you saw the news, but when Nintendo adds a selection of N64 (and also a bunch of Sega Genesis titles) to Switch Online in “late October,” you won’t be able to play them unless you upgrade to this “new membership plan.”

Granted, we don’t know the pricing on any of this yet. That vagueness has left room for fans to run through the worst-case scenarios for what this plan might cost, and when it comes to Nintendo’s handling of sought-after classics, it’s easy to be skeptical and cynical. The fact that we had to hear about this scheme and digest it all in the middle of a rapid-fire Nintendo Direct news flurry probably didn’t help matters. Emotions were high!

Subbing to a monthly or yearly service with the potential to pay more for add-ons to expand your content library? That’s nothing new for streaming movies and shows, and I’m sure many of us do it, even if we are very much not thrilled about it. I think the divisive response to the N64 and Genesis announcement just goes to show how ambivalent — or outright disappointed — some people have been with Switch Online so far, whether it’s a less-than-ideal online infrastructure, “missing” features compared to other platforms, funky libraries, the inability to buy retro games (Virtual Console style), or all of the above.

For me, it’s $20 a year, and I don’t think twice about it. My expectations aren’t high, even if I do wish the Super Nintendo library had more going on. Cloud saves, online multiplayer, and infrequent but interesting new games like Pac-Man 99, plus a head-scratching blend of good, bad, and ridiculous NES and SNES games — that’s been enough to keep me.

Things start to get tricky when the price goes up, though. Then it becomes higher-stakes.

If Nintendo charges $30 a year for the top-tier Switch Online plan, we only get nine N64 games at launch, and future game drops follow a glacial schedule, that’s gonna be frustrating. If it’s $25 a year, that’s better. If Banjo-Kazooie is on the super-near horizon, that’s great. Without other perks, it’s a tough sell. I know some of you are anticipating a $15 or maybe even $20 increase for the Expansion Pack plan, but I’d be very surprised. (Don’t tell Nintendo I told you this, but if there were ever a GameCube tier, with the ability to somehow play SSX Tricky on Switch, they could get away with highway robbery.) 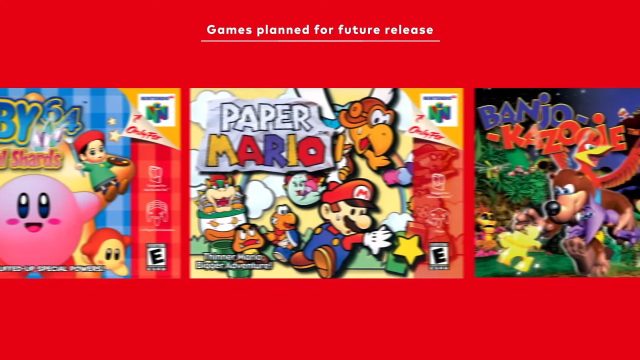 We’ll see how this all shakes out soon enough. Hopefully it’s a modest increase, and hopefully everything goes smoothly, performance-wise. There are some newfound concerns about PAL versions. And, huh, Japan is getting a six-button Genesis pad.

It’s worth reiterating that beyond the nine N64 games in the top-most image, Switch Online will also get Majora’s Mask, Mario Golf, Pokémon Snap, F-Zero X, Kirby 64: The Crystal Shards, Paper Mario, and Banjo-Kazooie at a later date. As much as Banjo could be a one-off, man, its inclusion here is intriguing. I would be ecstatic if Switch Online added Diddy Kong Racing, and while I have zero expectations, how about GoldenEye, too. Pokémon Stadium 1+2, Super Smash Bros., and Mario Party 2 or 3 would be such crowd-pleasers. What else?