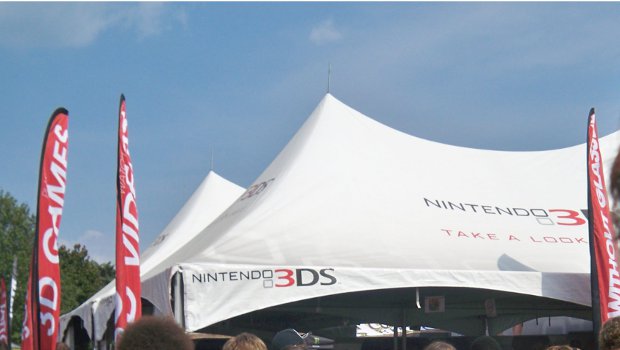 Nintendo’s 3DS may have gotten off to a rocky start, but the company is doing (almost) everything in their power to spread the word and boost sales including, as of Thursday, a permanent $80 price cut. In attempt to evangelize the system, they’ve also sponsored Van’s Warped Tour and, while I was enjoying the musical stylings of A Day to Remember, Less than Jake, Against Me!, and others, I also took some time to check out their spacious 3DS tent.

Amongst the punk and metal kids with black skinny jeans, over-sized tank tops and carelessly stretched, blown-out piercings, there was Nintendo’s sizable white tent.  When they announced their sponsorship of the concert series earlier this year, I was a little skeptical. As I made my rounds of the Amphitheater, however, I saw people take to the tent in droves. 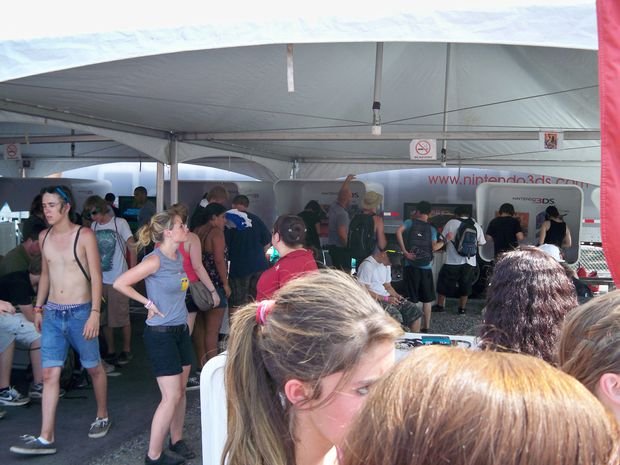 On the roughly 3 dozen display units, there were demos of Super Street Fighter IV, Dead or Alive: Dimensions, Resident Evil: Mercenaries 3D, Ocarina of Time 3D, and the handheld’s assortment of AR games, including a giant AR card on the floor. Shooting an AR dragon becomes much more enjoyable when said dragon is 4 feet tall.

From the chatter in the tent, it seemed that people were legitimately impressed with the system’s 3D effects which, while not everyone finds them to be spectacular, it’s the unwashed masses that needed to be swayed. In that respect, it felt like a successful venture. Disappointing as it was to not see anything new or particularly noteworthy, it’s nice to see the company out supporting it’s (arguably) floundering handheld so strongly and, from what I saw, public interest was high.

With the recently announced price cut, things could be looking up, but at the very least, I got a ton of StreetPasses, and that’s what really matters.