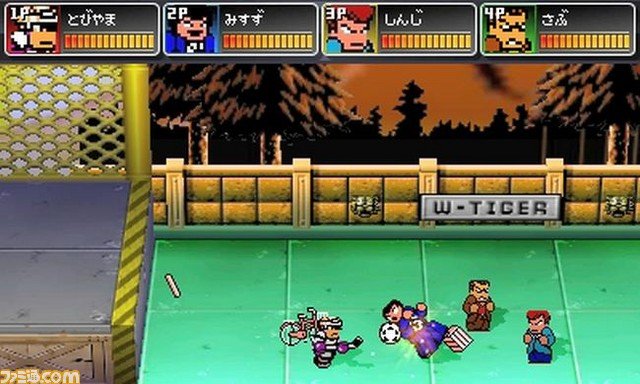 In the 80’s, the idea of street punks with poofy hair was really big in Japan. It was that concept that spawned that Nekketsu Kouha Kunio Kun (known as Renegade in the states), and its sequel, River City Ransom. In Japan, many more games in series were released in the series, though here in the states we only got a few of the sports titles (like Crash and the Boys and Super Dodgeball) and the GBA remake of River City Ransom.

I’m holding out hope that we’ll get this 25th anniversary Kunio Kun game here in the states. You can’t exactly tell from this teaser video, but the game looks great, 100% true to the original NES games, combining all the art styles of the various titles into one release. Loyal fans of River City Ransom will want to watch the trailer anyway, as it ends with a song that any fan of Merv Burger is sure to appreciate.

I attached some screens, so if you want a better look at what could be my favorite upcoming 3DS title, then barf it up!