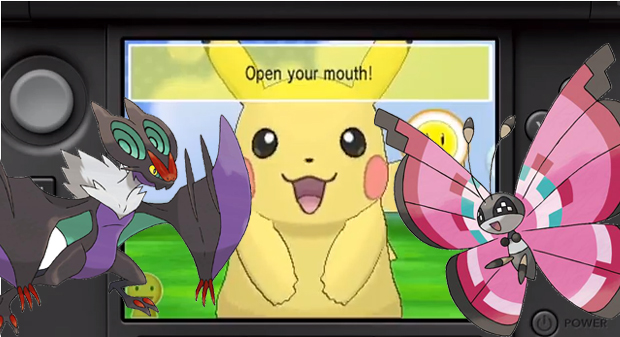 Coming from this mornings Nintendo Direct is the news that the long rumored additional classification of Fairy-type Pokemon will make it’s debut in Pokemon X/Y. This means that some Pokemon you already know and love, like Maril, have become Fairies. Fairy-type is strong against Dragon-type, which almost makes sense, as both are based on creatures found in ancient European myths. I wonder what Fairy-type moves will be like? Fairies just kind of fly around and eat little cakes, right? Maybe you can kill Dragons with little cakes!

Next up are two new Pokemon were also casually revealed — the techno-Moth Vivillon and the bat-dragon thing called Noivern. They didn’t get much screen time though. Instead, we got a lot of focus on Pokemon-Amie, the new mode where you can rub down and feed your Pokemon Nintendog‘s style to increase your level of emotional bond. There is even some Milo-style face recognition in here. Open your mouth a smile a little bit to make a Pokemon happy!  I imagine it’s only a matter of second before the sick, sad minds of the internet turn that “Open your mouth” Pikachu image into something pornographic.

Also, not-announced by Nintendo this morning is the news that original voice actor for Brock from the US Pokemon Anime joined the cast of Teenage Pokemon. Check out the gallery for a closer look at the new Pokemon designs, and stay tuned to Dtoid for some hands on E3 previews of Pokemon X/Y.