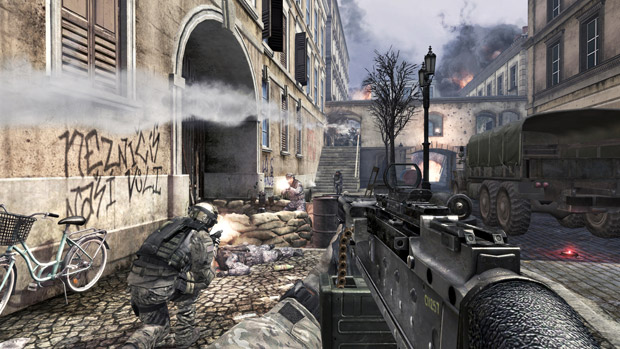 One of the new reveals at Call of Duty: XP is the new “Kill Confirmed” mode. This game type plays out like a regular team deathmatch except now when a player is killed, they drop dog tags. Players then need to collect the dog tag over a player’s corpse in order to score a point. If a teammate is downed, the ally team member can collect the dog tag from their teammate and deny the enemy team the score.

It’s a pretty fun game mode from the few matches I played. It’s a nice cross between deathmatch and capture the flag. I also like how it’s designed to keep the players moving. You can’t just hide and kill here.

Additionally, players can now create user-generated game modes. I didn’t get a chance to mess with this just yet, but it sounds like you can do whatever the hell you want as far as the game modes goes. You can also sync your custom game type to Call of Duty Elite, where friends can rate and download your creations to try out themselves.

One last new mode that was announced is called “Team Defender.” Not sure exactly what that is, but I’ll see if it’s available to play today. No final count for modes yet either; do know that there are 16 maps on the disc at launch.