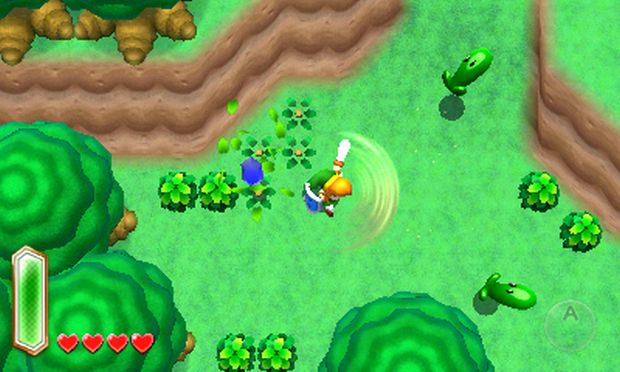 Nintendo announced a sequel of sorts set within the same world as The Legend of Zelda: A Link to the Past, and I got to play it yesterday. Nintendo wouldn’t tell us ANYTHING about the game, though. Nothing about how it fits in the timeline, why they’re exploring this Hyrule again, whether Miyamoto is involved — nothing! They simply handed us a 3DS and let us loose in one of the game’s dungeons.

The new adventure focuses more on vertical gameplay, and I had to ascend over seven floors of this dungeon to reach the worm-like boss scene from the gameplay footage. In order to do that, I had to utilize my hammer to smash springs, then get on top to be launched to out-of-reach areas.

Traversing this dungeon also required me to use a new ability that allows Link to flatten up against a wall, shifting the experience into a side-scroller of sorts. Doing this allows me to me get over ledges I couldn’t jump over or navigate giant blocks that would have made me fall to my death otherwise while riding on moving platforms.

The new visuals look nice, especially in 3D, and controls and item management have likewise been streamlined. In the demo, the X button is used for your bow, Y for your hammer, and B for your sword. Additionally, you can block with your shield using L and unleash a whirlwind sword attack if you hold down B. Business as usual here, really.

Note that you’ll probably be able to reassign your buttons to other items. I asked Nintendo if you can indeed do that and surprise, they wouldn’t even answer such a simple question! But it’s more than likely a given, especially as Ocarina of Time 3D had that ability.

Other than these new features this Zelda definitely felt like Link to the Past of old. There were a lot of hidden areas in the dungeon, lots of chests to loot, plenty of monsters to kill in various ways, light puzzles to solve, and keys to find in order to open up doors.

Seriously, we all probably learned more in the trailer than through my hands-on time. But at least I can say the game plays well and, more importantly, has that right Zelda feel.