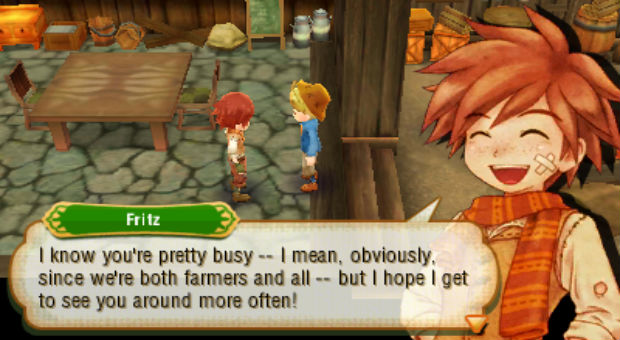 Coming to 3DS this winter

Call it stereotypical of me if you will, but I’m a huge fan of Harvest Moon and its spinoffs — even the wannabe games. That’s why I’m so excited to see Story of Seasons releasing via XSEED this upcoming winter. After 18 years of Harvest Moon, it’s about time for something a little different, wouldn’t you say?

Released in Japan as Bokujo Monogatari: Tsunagaru Shintenchi, it’s a 3DS exclusive headed by Yoshifumi Hashimoto that looks to kickstart the series and breathe new life into what has been a bit of a stagnant series as of late. Story of Seasons is still a farming RPG and life sim, but it’s changing considerably, and I can’t wait to see what all those things entail.

Players will take up residence in Oak Tree Town, where they’ll raise crops, care for farm animals, and build a farm from the ground up. Only this time around, multiplayer and StreetPass connectivity will be included, allowing players to travel to others’ farms, grow crops together, and interact with each other. Interestingly enough, players will also be able to collect Mario items to decorate their houses and farms with, like a Super Mushroom, Fire Flower, or Super Star. A little strange? Yes. Awesome? Definitely.

Story of Seasons will be debuting at E3 next week, so if you’re looking for more details, I’m sure we’ll have something to report. In the meantime, better step your Harvest Moon game up in preparation. I’m going to expect that you all visit my farm.