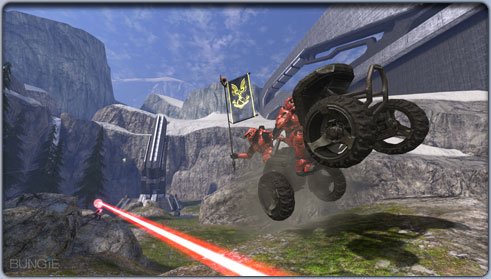 Today, Bungie unveiled their newest, albeit uninspired, vehicle — the Mongoose! It’s official name is the M274 ULATV, but that doesn’t sound nearly as cool as “Mongoose” — which everyone knows is a fictional creature of unbelievable beauty, with a vast, golden plumage with curious medicinal properties. Kind of like the Warthog.

Red vs. Blue jokes aside, the Mongoose (well, Halo 3 as a whole), looks really pretty, although it doesn’t seem to be much more than a beautified 4-wheeler, an altogether domestic and redneck-ish, and fun, vehicle.

The best part of the whole deal is Bungie’s presentation. They show a few screen shots, and a rather strange group of specs. The Mongooese gets 45-65 miles per gallon, incidentally. They also give a few examples demonstrating the best tactical use of the Mongoose, as well as few clever “remarks” from “soldiers.”

“The M274 doesn’t have a radio of its own, isn’t equipped with GPS, it doesn’t even have any gauges. The only piece of equipment more primitive is the crate it ships in.”

“If they’re not gonna give us armor they should at least give us a mounted weapon. And you should be able to tow a trailer with it. And, god forbid, you try to ford bodies of water more than seven feet deep.”

“The (M274) is definitely the most Buddhist land-based motive system in the UNSC’s arsenal… I’ll just let that sit with you for a while.”

The only thing left to ponder, really, is when the King Cobra will be announced.