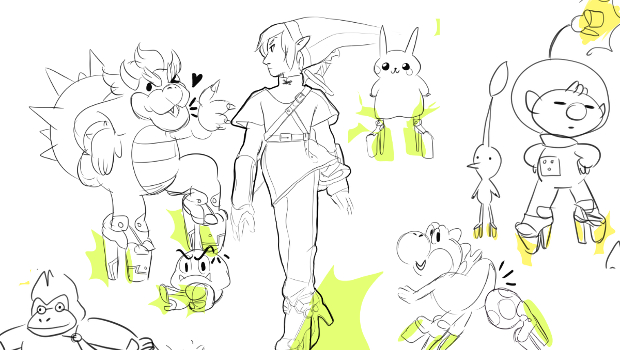 This should be a real mode

When Nintendo unveiled Samus’ new footwear in yesterday’s Smash Bros. presentation, the internet went wild. “How dare they!?!” they cried, tears of shoe-serious stress and tension streaming down their faces. “Just because she’s a girl doesn’t mean she should wear high heels!!!” screamed at the top of their lungs, voices hoarse with rage about videogame shoes.

Natasha Allegri, the co-creator of Bee and Puppycat, Fiona and Cake, Musclecat Showdown, and many other greats seems to agree. Electric high heels aren’t just for girls. This fan art proves that heels are for everyone, including Olimar, Bowser, Yoshi, and even the little egg that Yoshi poops out. It’s great fun for one and all.

People are also flipping out over the fact the 3DS Smash Bros. is coming out before the Wii U version. I bet they’d relax if they knew that “Everybody high heels” mode was a Wii U exclusive. Try to walk up and down the Final Destination cat walk without tripping. That’s AAA system seller multiplayer action for sure.