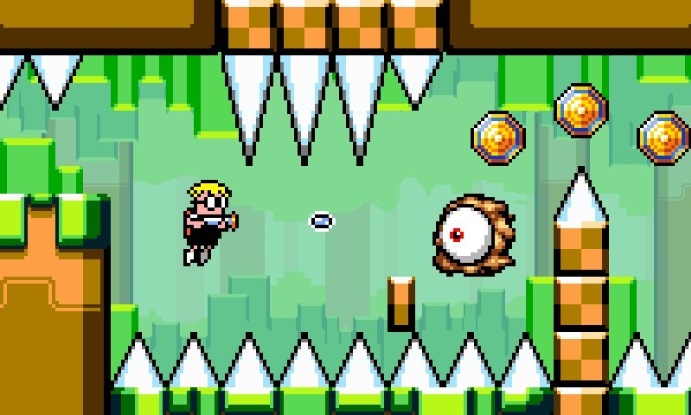 About on par with the Granny levels

Mutant Mudds has enjoyed quite a ride on Nintendo systems and beyond. It was original released in 2012 on 3DS, but eventually made its way to the Wii U, PC, Vita, PS3, and even iOS. While it was touted as a return to retro aesthetics and difficulty, it was the Granny levels, introduced by way of the PC edition, that really tested players. That’s the sort of feel that the upcoming Mutant Mudds Super Challenge is going for when it hits 3DS and Wii U later this summer.

Having played the three-level demo, Super Challenge can be downright nasty at times (in a good way). Coins are hidden behind walls, some jumps are pixel-perfect and designed with little to no margin of error, and many enemies are devilishly obscured from destroying with your standard shot. It’s important to note that all of the stages are completely doable though with practice and an understanding of the core mechanics, which is something Renegade Kid just seems to “get.”

Bosses are a thing now, and arguably the toughest aspect of Super Challenge. The big bad in the demo is a ghost, and works like an obstacle course of sorts, tasking players with running a gauntlet from left to right to jump back to the boss’ plane and blast him. You’ll have to do that three times — it sounds simple enough, but a number of distractions make it more difficult than at first glance.

For starters, for each gauntlet run you’ll pick up a ghost buster item, which is the only way to damage ghosts. You’ll have to conserve ammo while you’re running through the miniature level, and save at least one shot to hit the boss’ weak point. It’s really tough, as some enemies need to be destroyed the way. It’s the kind of retro difficulty that’ll make you rip your hair out, but it feels completely fair and should only take you a few runs to conceptualize.

Download the demo on Wii U yourself right now, until it goes away on June 22. If you decide to buy Super Challenge, you’ll get 15% off for up to one month after launch by owning the demo app.