It goes without saying that Nintendo has a lot riding on the revival of their winged warrior in Kid Icarus: Uprising. It’s the first major, first-party release of the year for the thriving 3DS and something even more important to the fans of this once forgotten franchise — a shot at a mascot’s redemption.

Back in January, we had the pleasure of going hands-on with Pit’s single-player shenanigans, but at the time Nintendo was very hush on just how far the multiplayer had come since its brief showing last E3. That is, until now. 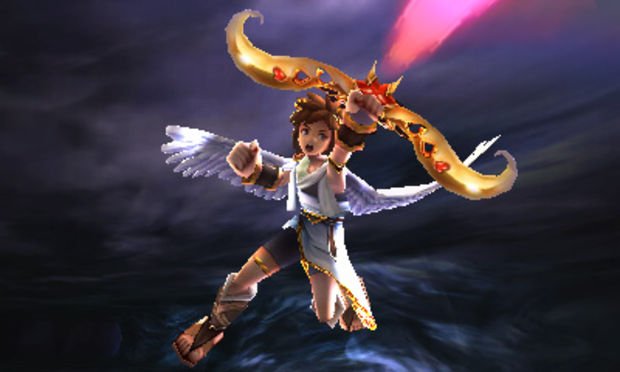 Twice the the Pit, twice the multiplayer madness.

Beyond Uprising’s single-player escapade lies two multiplayer modes –available online or locally — for stylus soldiers to duke it out in: Free-For-All and Light vs. Dark. Each mode allows players to take their best weapon and power setups into the field for some heavenly warrior-on-warrior action. Up to 16 slots can be customized ahead of time (or prior to battle), with a 17th slot designated as a random weapon and power distributor.

Once a desired setup is selected, players will enter a practice arena where they can test their selected gear while waiting for the contest to begin. Each mode supports six players, with the game assigning CPU determined fighters to fill any slots left vacant. 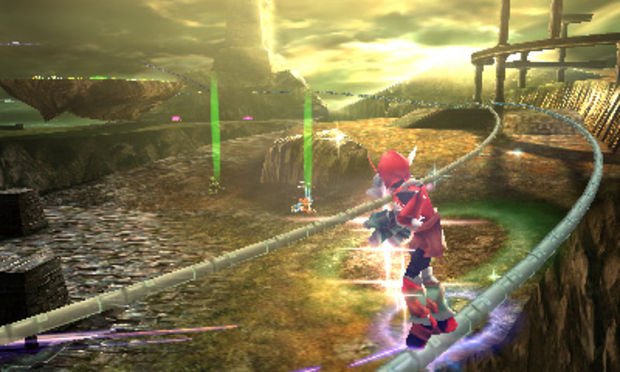 In Free-For-All, the objective is rather simple: have the highest score at the end of the match to win. Score is controlled by the weapons each player has equipped. The more powerful the weapon, the higher the value it possesses. When one player kills another, that value is thus added to their score. So, while more powerful weapons contain higher values, they run the risk of building an opponent’s score faster, which can be disadvantageous to novice players.

Light vs. Dark — a team based mode — was by far the most original of the two offerings. At its core, it is a 3-on-3 battle to the end. What separates it from being run-of-the-mill is the life meter that each team shares during the match. When a player dies, their team’s overall health reduces based on the value of that member’s weapon. Once the meter is completely depleted, the player who died last becomes either Pit or Dark Pit (depending on their team affiliation), is given a new weapon at random and has increased strength and agility for the duration of the match. From this point on it’s up to the opposing team to hunt down the rival Pit and kill him to secure the victory. 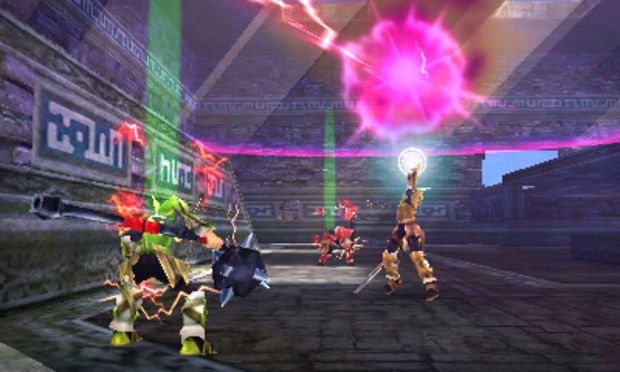 While both modes offer their own levels of fun, I found Light vs. Dark to be the more well rounded of two multiplayer experiences. The combination of a shared life meter and the strategy needed in weapon selection provided an engaging multiplayer affair. Like Free-For-All, there is a definite risk-versus-reward component, which keeps this mode — well, both actually — from coming off as just another deathmatch shooter.

Don’t like your weapon, then make a better one.

In our single-player preview, it was mentioned that over the course of Pit’s adventure, the angelic warrior would stumble upon countless amounts of weapons from nine different classes — each with their own unique properties and stats. And while going through the game at higher intensities (the game’s difficulty system) and playing multiplayer rewards players with stronger and better weapons; what’s a player to do when the doubles start piling up? 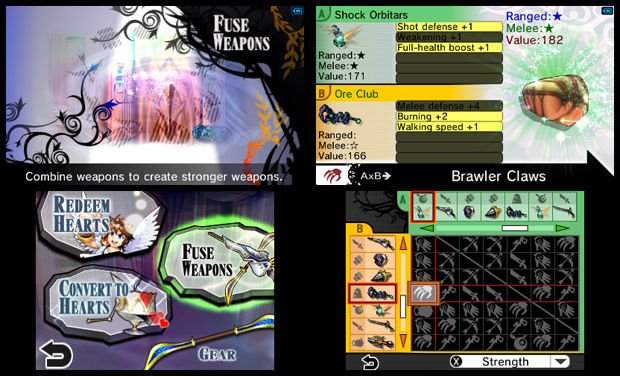 That’s where the Weapon Fusion system comes into play. While a player cannot craft a weapon they have not found in the game (further encouraging players to up the intensity) the ability to take one weapon and pass on its beneficial stats to a pre-existing weapon type serves as the main motivation for constantly crafting.

For example, some weapons contain properties which increase a player’s running speed while equipped. Being able to transfer this ability to a large weapon (i.e. clubs or cannons) is beneficial because these weapon classes hinder both Pit’s speed and endurance, making him more susceptible to enemy attacks. Once two weapons are merged, both are lost but each new weapon created can be endlessly forged with others to the heart’s content. 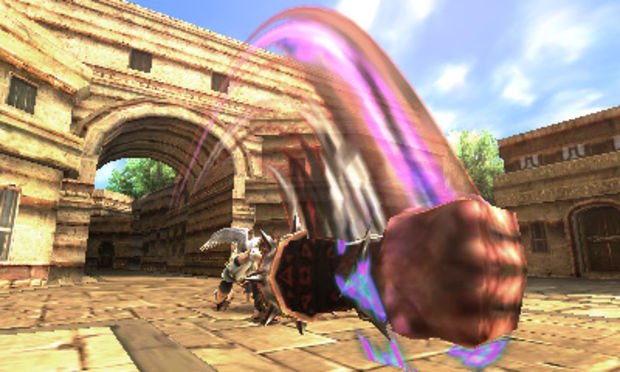 Unfortunately this part of the preview was hands-off, but with what seems like an almost infinite amount of weapons and an easy to navigate menu — which breaks down weapon fusion results prior to fusing — it’s simple to see how one could spend hours on end making the perfect weapon.

Make some bling, then share it on the streets.

Uprising’s Street Pass mode merely functions as an extension to the weapon crafting system. Taking any weapon available, a player can turn it into a gem to be shared with whomever comes in contact with their 3DS. 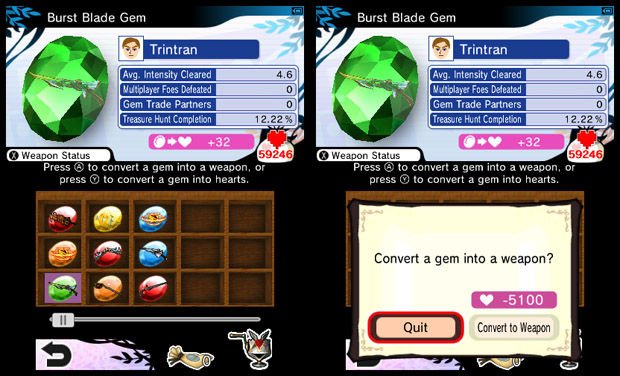 On the flip side, once one is received, a player has three options for that gem. It can be directly changed into the weapon it represents (for a price), fused with another gem in possession, or outright converted into hearts — the games form of currency — to be used elsewhere in the game.

The Street Pass mode is simple, but the fact that any weapon can be received from the kindness of stranger feels like a fun, mysterious way to trade — though I guess one could always be a dick and share their most worthless weapon. I guess I’ll have to wait till PAX East to find out.

Putting the foot down — final thoughts. 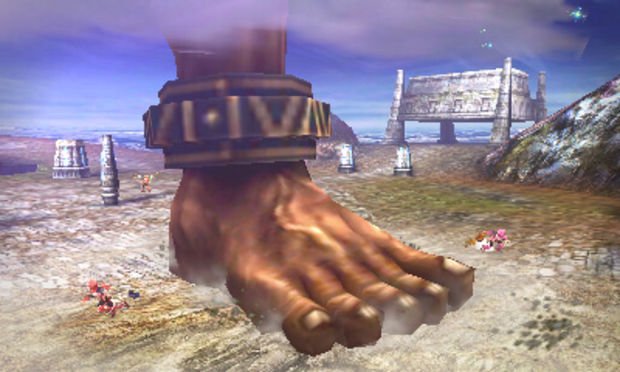 Between the single and multiplayer offerings in Kid Icarus: Uprising there is a lot of content to digest. The weapon fusion system, paired with the Street Pass functionality, looks to provide an addictive component to an already solid game. I enjoyed my time with the multiplayer and though the ground component of the single-player was my least favorite experience when I previewed the game back in January, it transitions itself better than I would have imagined in a competitive scenario.

Look to take flight with Pit this March 23, when Kid Icarus: Uprising soars into stores for the 3DS.