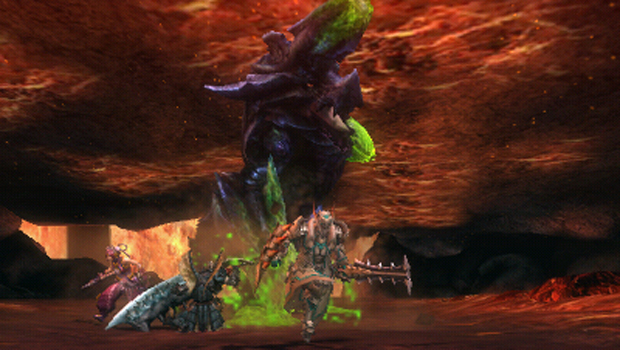 Much hubbub was made earlier this week over the newly revealed Monster Hunter game for the 3DS, and the analog nub cradle that’s coming along with it. The peripheral, which gives the 3DS the ability to play games with double nub controls (something people have been asking for from the PSP for years), caused many gamers to completely lose their sh*t. The hysteria ranged from “Nintendo is going to force us to use this for every game now!” to “Nintendo is going to force us to buy this and then there wont be any games on it!“, to the every popular “They ripped us off by not including this in the first place even though I don’t want it anyway!” This is all without announcement of the nub cradle’s price, compatibility with software, release date, official name, or anything else for that matter.

All that noise effectively obscured what is arguably the bigger news here; that the 3DS is getting a Monster Hunter title, and it looks awesome. The game is based on Monster Hunter Tri for the Wii, but there will be plenty of additional content here. Unsurprisingly, the game’s new monsters look awesome, not to mention massive. More unexpected is how great the game looks. I’d wager that it’s even prettier than the Wii version; one of the few games to prove that when developers put in the time and effort, that the Wii can put out some beautiful graphics.

Also surprising is the total lack of double nub to be found on the game’s official website. It makes me wonder if the new peripheral will even be required to play the game. Could Nubageddon be over already, just a few days after it devastated the world forever?