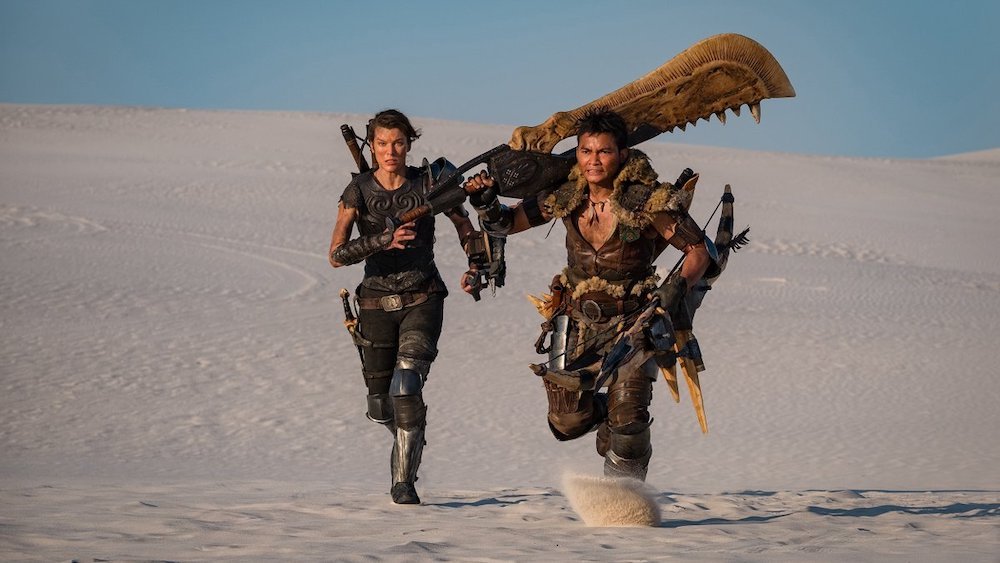 If for whatever reason you’ve been following the production of the Monster Hunter movie, there is plenty to be worried about. The Resident Evil film husband-and-wife team of leading actress Milia Jovovich and writer-director Paul W.S. Anderson are adapting the video game franchise to the big screen, and set photos from Jovovich featuring militaristic uniforms and present-day weaponry have raised concerns that this will be Monster Hunter in name only.

Jaa is portraying “The Hunter,” while Jovovich is Captain Natalie Artemis, one of several members of a United Nations military team who is transported into an alternate dimension through a portal. Artemis, as seen in the tweet embedded below, is wielding a slinger, while the Hunter carries a Giant Jawblade. The premise of the film will have this team, along with Jaa’s character presumably, defend the portal to prevent monsters from invading our world. Ron Perlman and T.I. have also been cast in this film as “Admiral” and “Link” respectively.

I fully expect this movie to be a fucking mess, and I’m all for it. Too many video game films are mediocre to the point of being utterly boring, but with something that is pure cheese like Anderson’s Resident Evil films or his Mortal Kombat film, at least some entertainment can be siphoned from the experience.

The premise certainly seemed ridiculous enough—instead of being a direct adaptation of any particular game (unless I missed the Monster Hunter game where you use an assault rifle), this sounds more like a (possibly accidental) homage to Stargate. Here’s hoping that Monster Hunter will emulate the first-person shooter sequence of the Doom film just to really go all out. Maybe Anderson will take a page from Monster Hunter: World and put menus all over the screen.

No release date is set for Monster Hunter yet, but as you might have likely gathered by now, I am compelled to share the same Resident Evil clip every time Paul W.S. Anderson is mentioned.