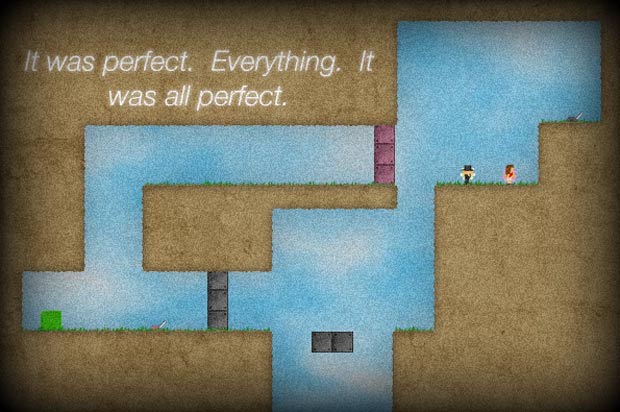 Let me be very clear: The Company of Myself is brilliant. I’m a lifelong defender of the gaming industry as one of the best art mediums the future has to offer, but due to my high expectations I often find myself not agreeing with like-minded gamers about which games are the best examples of our industry. I thought Passage received more attention than it deserved, but think that Sleep Is Death should be sending much larger shockwaves through the industry as the weeks pass by.

The ability for games to reach users at a wide range of emotional levels varies a lot from one person to another, but I think that Eli Piilonen‘s The Company of Myself indie game deserves a colossal and exponentially larger amount of attention and support than it has over the past half a year. I’m ashamed I hadn’t heard of it until recently, and sincerely hope it becomes the next Internet lovefest.

The core game mechanic in Company of Myself is one we’ve seen before, although swapping bodies can still be every bit as fun as it always has been. Add to that an emotional narrative that doubles as one of the best integrated game tutorials I’ve ever seen in indie or professional games, and you’ve got a game that’s hard to stop playing.

As the game goes on the main game mechanic is used in a way that makes Zelda games look amateur in their emotional levels, and the last level (if played for a long time) is one of the funnest indie game experiences I’ve ever had online. Stick around for the narrative that continues through the end credits and the screenshot above, which is seemingly very simple, takes on a much more symbolic meaning, and has a deeper level of impact on its players.

The only single thing I would change in this game is adding a few more levels in the middle of the game to make the climactic emotional scene even more dramatic and saddening.

You can play The Company of Myself here on GamesFree. I’m eager to hear what everyone thinks of it in the comments. Just another typical emo indie game? Or one of the best flash games of the year?