Lots and lots of combo breakers

I’m not popular enough to have any actual friends to play board or card games, which is why something like EGLX is a great opportunity to expand one’s horizons and try things they might otherwise miss out on. Uncaged: World Fighters is an experience I’m glad I got to have.

Our good pal CJ and I had a chance to check out this MMA-centric card game at this weekend’s show. We were sat down with an introductory round to explain the mechanics and let loose, and luckily had a good enough time to complete a single game. 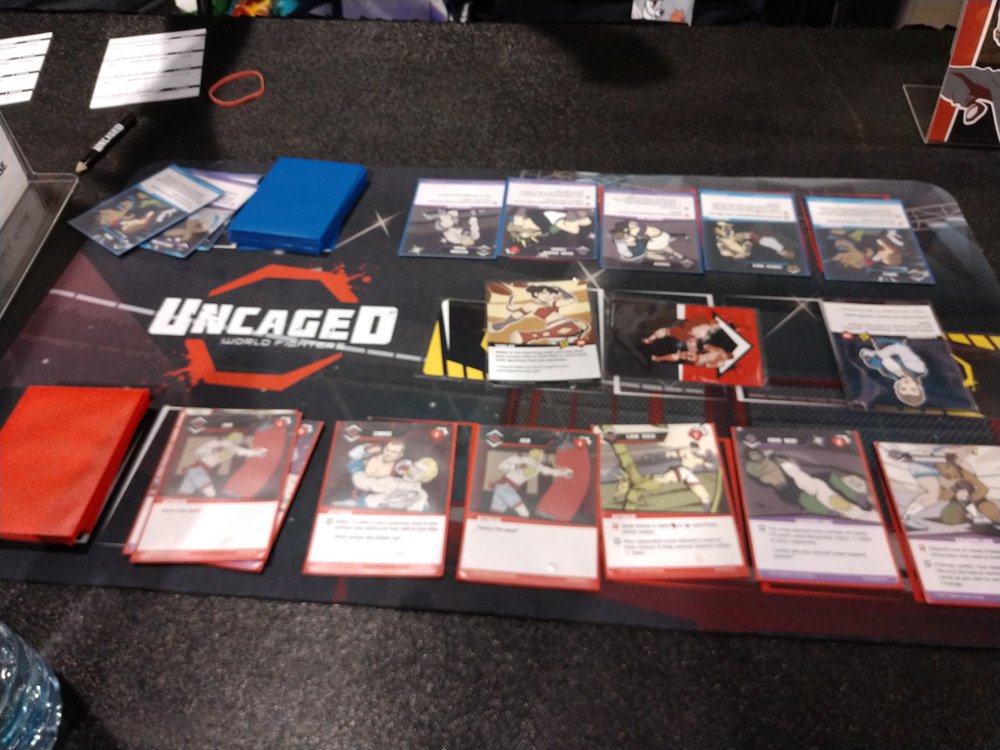 Uncaged works within the ebb and flow of a typical MMA match, except players take turns being on offense and defense within each round. One player uses the attack cards to set up punch and kick combos in standing stance, with additional cards providing grappling moves should the action move to the mat. The player on defense uses several defensive maneuvers and counters to try to block or deflect damage, and can end the opposing player’s attack combo early with combo breakers (which CJ and I apparently excelled at). Each round ends after two offensive opportunities each, and the game is over when you finally whittle one player’s health down to zero.

Moves vary in style from boxing, kung fu, Jiu-Jitsu, and Muay Thai, and each card has a cool illustration and description to help add some flavor to the action. The four starter hero characters have varied styles and special moves to set them apart from one another.

As someone who doesn’t play a ton of card games, one of the most appealing features is how easy it is to get into and understand. In our 25-minute session, we were able to move from a guided tour of the action to forming our own basic ideas and strategies. I don’t watch MMA but wrestled in high school, so the flow of the match got on well with my experience in the sport. Your mileage may vary, of course, but even someone with little knowledge of the sport should be able to understand the game after a few rounds.

Even though CJ (barely) beat me, Uncaged: World Fighters is an entertaining and unique card game that I had a really good time playing. I guess it’s time to make some friends.