During a session with some of Nintendo’s first- and third-party 3DS eShop game developers yesterday, I got a chance to check out the (incredibly promising) future of the eShop. I first got some hands-on time with WayForward’s Mighty Switch Force, a game about a cyborg warrior girl named Patricia Wagon who saves the world (or Planet Land, anyhow) from the wrath of the Hooligan Sisters with the aid of her trusty “Ugly Checkpoint Dog.”

If the premise sounds a bit cheeky and maybe a little odd, you’ll be happy to know that WayForward’s signature style shines through again in all facets of the game, from the puzzle-solving elements, to the great soundtrack, wonderful art style, and even some nice 3D implementation as well. 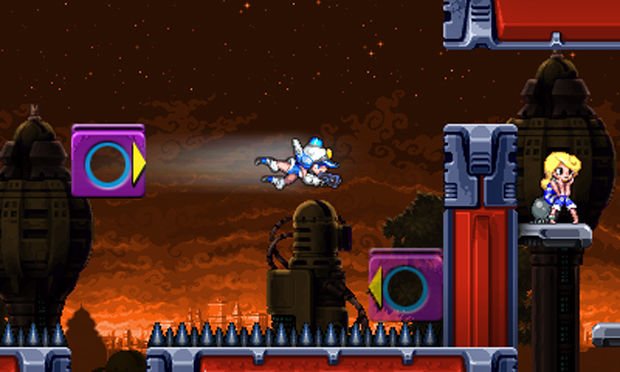 In Mighty Switch Force, you control your cyborg character in a way that’s reminiscent of the Mega Man X series (a similar shooting mechanic plus tight and responsive but not overly difficult jumping) while trying to find all five Hooligan Sisters throughout each level. The biggest twist comes in a form similar to earlier WayForward games (such as Mighty Flip Champs) — a simple mechanic that progressively offers more complex and engaging situations.

When you first begin, you’re not given any sort of tutorial on what you must do and instead have to figure out how to traverse the levels with special platforms that “flip” in and out of the foreground depending on a button press. As you beat each level, a new twist is added to the mechanic, such as enemies that can only be killed through smart use of the platforms or specialized platforms that give you added abilities when you interact with them. 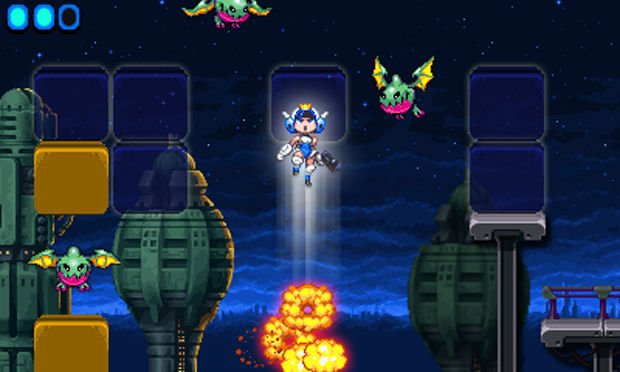 The art style of the game is wonderful, with interesting enemies and all kinds of activity in both the foreground and background. In one stage, for example, I noticed a running monorail repeatedly charging through in the distance while everything else was happening up front. The 3D is implemented quite well — it’s predominately sprite-based with layered 3D, sort of like the 3D Classics updates only with more depth and thought given to events happening in the background.

The game will feature a total of 16 levels, with the added challenge of clearing each level under the par time. Though the levels are initially pretty short, they become more complex as you get further and new mind-bending puzzles are thrown in at every juncture. Fortunately, you have your trusty “Ugly Checkpoint Dog” (it’s actual name) popping up whenever you reach a new puzzle segment, twitching spasmodically and wagging its tail while waiting patiently for your death. This game will not be a particularly lengthy excursion by any means (maybe a couple hours for the first playthrough), though the great art style and generally fluid and responsive gameplay will keep you coming back for more. 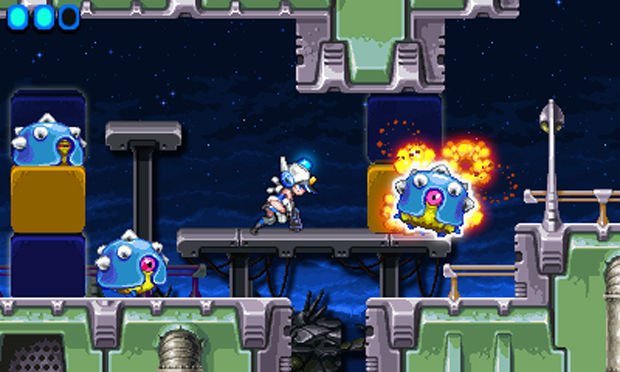 Personally, I’m excited for Mighty Switch Force, and at a price that promises to be quite a bit under the $10 mark, I don’t think this infectiously humorous and entertaining game should be passed up.

As an added bonus, the soundtrack by the esteemed Jake Kaufman will be released for free the same day as the game! Enjoy a free track right now!