Mighty Gunvolt has just acquired some DLC and it’s cheap, ringing in at $2.99. So what do you get? Four stages, and subsequently, four boss battles. That’s it. There’s no fanfare for the new levels or new story — they’re just available instantly on the world map screen through a mysterious “portal” menu option.

But that’s okay, because they’re all really fun. All in all you’re getting two themed after Mighty No. 9, one from Azure Striker Gunvolt, and another from Gal Gun. 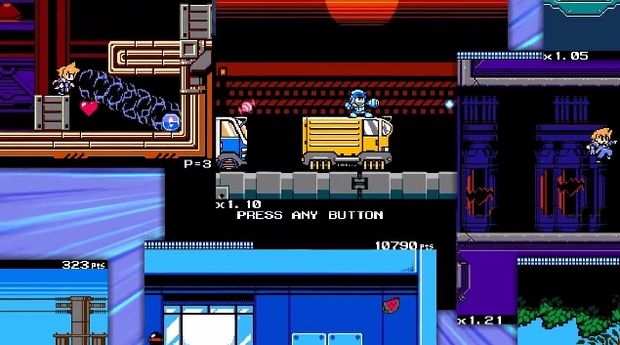 The Mighty stage that features the blade-based No. 5 robot is my standout favorite, as it takes place on a highway with car platforms and a moving background. It really takes me back to classic train stages like Charge Man and Grizzly Slash, and the 8-bit nostalgic touch is best represented in this level. While the other Mighty stage (No. 1) isn’t as memorable with its factory setting, the fire-themed boss is a standout encounter, with very small nuances in terms of the enemy design. It’s challenging for sure, and it took me at least five tries to even notice the pattern, much less master it.

The Azure Striker Gunvolt stage is technology themed, and my second favorite of the bunch after No. 5. It really brings me back to the days of Spark Man and Magna Centipede, and the colorful purple hues fit the boss style. Speaking of the boss, Elise is easily the toughest enemy in the entire game, and will test even the most hardened of 8-bit fans. She still has the “split” mechanic from her source material, and both of them will throw kunais that turn into snakes once they hit the ground. Add in a projectile super and some dashes and you have one difficult (and fun) boss. I’d love to see a platformer comprised entirely of bosses like this. Well done, Inti Creates.

Gal Gun is represented with another school-based level, with the cute blob Mr. Happiness as the boss. It’s a very straight-forward endeavor, but the backgrounds and little details like basketball racks really help make it stand out. Mr. Happiness is the clear-cut easiest boss in the DLC, but the “split-apart” mechanic that’s prevalent in many blob enemies is still fun to fight.

While every stage or boss may not be hall of fame worthy, the combination of the two in tandem works in favor of every facet of the DLC. If you enjoyed the core game, pick this accompaniment up immediately.