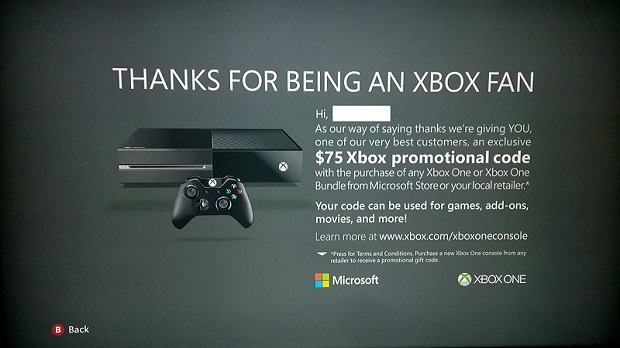 Microsoft’s doing all that it can to get some of its most loyal Xbox 360 users to take the plunge and invest in an Xbox One. Their most recent tactic appears to be offering $75 credit to anyone in the US that makes the upgrade this month.

As spotted by a user on NeoGAF, Xbox 360 owners have been met with the promotion upon powering up their consoles. It’s worth noting that it seems as if not everyone is eligible for this offer — just Microsoft’s “very best customers.” As the credit will be sent directly to the account via the system’s message center, it looks as if the promotion is truly barred off to anyone that didn’t receive it.

However, this deal is the perfect opportunity for anyone considering the switch that was lucky enough to be included. Microsoft has some high-profile titles like Halo: The Master Chief Collection and Sunset Overdrive coming this fall. Essentially giving one of those away for free is a decent incentive for players to go ahead and adopt the Xbox One.