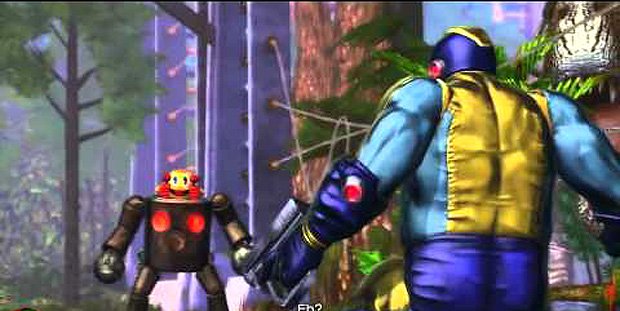 Despite the fact that the data for Mega Man and Pac-Man are on the game’s disc, Capcom will not be unlocking the two mascots on the 360 version of the game. You can unlock the these mans for free on the PS3 version of the game, and they’ll also be immediately playable on the Vita port of the title. We can only guess that Sony paid Capcom a pretty chunk of change for these exclusives. Otherwise, I’m sure they’d love to sell these additional characters to 360 owners.

The fact that Capcom screwed up and left the characters on the 360 disc isn’t that surprising to me. What I find strange is that Sony’s presumed attempt to make the PS3 version of Street Fighter X Tekken more desirable just didn’t work, at least in this country. Despite having five fewer characters and no same-console online tag team mode, the game still sold better on the 360 than the PS3 in the US by a fairly large margin.

I’m sure that’s partially because the 360 has a larger install base in the US than the PS3, but I also think that the lemmings-like attitude of some 360 owners also had something to do with it. If their friends are all getting a game on the 360, then they’re getting it on the 360 too, even if it’s a worse game on that console. As long as that mentality is so prevalent in gaming culture, developers and publishers are going to continue releasing substandard products without suffering any negative consequences.