Yoshi’s New Island shakes the Yoshi’s Island canon down to its foundation. It turns out the stork dropped Baby Mario and Baby Luigi off at the wrong house. Not the momma! as it were. Then Baby Luigi goes and gets himself kidnapped and it’s up to Mario and Yoshi to bring him home as they make difficult choices that will test you morality and leave you second guessing yourself for days.

I mean, not really. It’s a new Yoshi’s Island game. Heck, when asking themselves, “What should we call this new Yoshi’s Island?”they only went so far as to think, “How about Yoshi’s New Island?” What’s with the obsession of newness? Of fileting yourself on the cutting edge? Can we expect Star Fox’s New Adventure and New Metroid Prime?

But yes, this is a platformer wherein you must protect Baby Mario, eat enemies, throw eggs, and flutter jump around like House of Pain. There is some “new” here, though less than the name implies. You can have ice breath or a gigantic egg. Obvious are the transformations, which are mostly tilt-based and don’t look all that fun or engaging. I got to try out Yoshi as a hot air balloon. He can also become a sub or a bobsled. It’s immaterial.

There are staples at play that I like (besides good platforming). There are six multiplayer minigames all playable through Download Play (one cartridge). I like that Nintendo often includes those in its games. And “Eggy Pop,” the balloon popping minigame, left me laughing at its name for a good 13 seconds, so it’s done its job, as far as I’m concerned.

It’s cute and charming. The discordant, kazoo-filled soundtrack is like if Tearaway‘s soundtrack was composed by kindergarteners. I like it, anyway. And the Yoshi Story theme has been stuck in my head all afternoon. Fighting Big Beanie, an angry bean with large eyebrows, was fun. 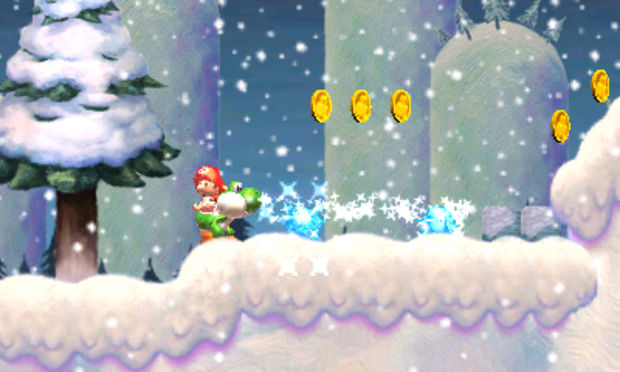 You know what you’re getting with Yoshi’s New Island. A new island, same as the old one, with unnecessary transformation sequences, cute music, and pleasant platforming. I still want Nintendo to do a new game with 2D artwork, though.